Zapata with Derek and Barbara

For all insomniacs, especially if you are feeling a little under the weather with a seasonal cold, then I suggest you take the Etherton remedy; get up before the crack of dawn and go birding, no matter what the temperature and what the weather conditions.  If the gods are with you it turns out clear and sunny and you get fabulous views of Little Bitterns and the first Red-necked Nighjars of the year. Well, it certainly seems to work for Derek and Barbara Etherton although I have my suspicions that whilst it cures your cold it gets passed on to the healthier partner!  Invited to participate next Thursday so not sure which will be the worse, getting up early or taking over the flu relay baton. Watch this space as they say.

Still full with the euphoria of lasts nights crushing of Fulham it was decided today was the day to welcome back the Red-necked Nightjars at Zapata.  So arising at silly o'clock [0600hrs actually] we were on site by 0645hrs. and it took all of ten minutes to locate the first Red-necked Nightjar.  As usual it was on the track by the landing light pier, it does seem to be their favourite.  Still dark, but the first glimmer of dawn showing over Malaga I tried sweeping my LED super power torch over the rough ground to attract any further birds.  Success!  One flew up and I managed to track it for a few seconds to give us both super views normally denied to us mere mortals with normal eyesight.  So that Christmas present was not a waste of money after all.

As the light quickly illuminated the sky dozens of Cattle Egret left the roost to take to their feeding fields, whilst flying through were at least 20 Night Herons in ones, twos and threes.  An early Common Kestrel was located on the landing lights as we crawled the track and every passing bush seemed to contain a singing Nightingale.  Cetti's Warblers were 'shouting', Goldfinches 'tinkling' and the general dawn chorus was in full flow.  Trying the lower area on the right before the ford we found many Little Ringed Plovers, a super Northern Wheatear and a first for us at Zapata, Collared Pratincoles.  A search on the bank for the Nightjars daytime roost proved ineffective but did turn up Iberian Hares.

The ford itself had Greenshank, Common and Green Sandpipers, more Little Ringed Plovers, Moorhen and Mallards.  A Grey Heron flew lazily away when disturbed.  Both White and Yellow [blue-headed] Wagtails completed this section.

Returning to the reed bed Short Toed Lark, Zitting Cisticola, Red-rumped Swallow emerging from nest were seen together with numerous Serin and Goldfinches [2 pairs feeding young].  Slowly moving down the track periphery vision picked up a flash of potential Little Bittern, yes it was and obligingly perched itself on a Tamarisk in view.  Creeping down in the car a few shots were obtainable but the best position had us looking directly into the now bright sun.  So drive out and back down the track on the other side of the reed bed and still the bird obliged, and it then got better as another male bird appeared as did a female!  Three Little Bitterns in close proximity, doesn't get much better trust me.  The first bird seemed to be showing off now and decided to make a flying sortie over the reed bed and land in the reeds.  Getting closer all the time and by now not worrying about me out of the car taking photos whilst Boeing 737's whistled over our head.  So enthralled by this that the Common Waxbills, a solo Whitethroat and numerous Reed Warblers took a distinct second place, but were noted for records sake. 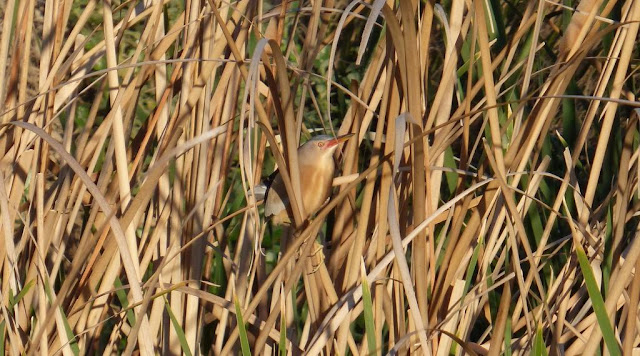 It's sightings like this that make you forget your recovering status from a serious bout of 'man flu' that has laid me low since Monday, all is forgiven - but now it's Barbara's turn!

Great report Derek and proves that it really is the early bird, with or without accompanying "man flu'", that sees the birds.

Posted by Bob Wright - The Axarquia Birder at 07:47