With the forecast promising strong winds over the next few days and just one before the end of the month and the possibility of yet more news following Derek's visit yesterday, I took myself off to Fuente de Piedra in search of a couple of new species for the year.  Lovely sunny weather and eventually n shirt-sleeve order before finally returning home and I had managed three new birds for the year, even if I dipped on the Ruff.  Mind you, whilst the Temminck's Stint posed well the same could not be said for the Lesser Flamingo which was very distant.  A case of scoping individual birds and thanks goodness, from this point of view, the numbers present seemed to be way below what they should be but the little chappy (or chappess?) was standing proud, well small actually, in all its pinkness and just waiting to be found and recorded.  The third new bird presented no problem at all as the growing number of Gull-billed Terns moved about with their usual chatter and then rested on the sand below the main mirador. 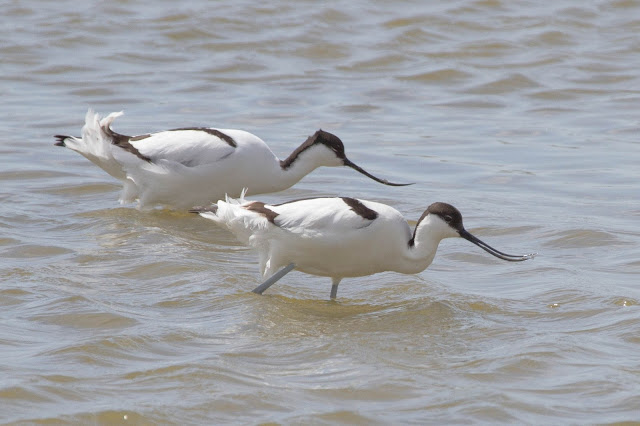 Driving up to the site I was amazed to see so much water on both the flooded field to the left and the scrape below the causeway and also towards the main water.  A Corn Bunting, the first of very many to be seen, posed in a tree as I approached as did  single Chiffchaff in the trees next to the flooded field.  The water itself held a good number of both Common Coot and Shoveler along with over thirty Black-winged Stilts.  A Common Sandpiper moved away as I stopped the car and on the far side a small number of Little Ringed Plovers and a couple of Kentish Plovers were exploring the water's edge.  Also on the water were a couple of pairs of Avocet along with two Redshank.  Above the water numerous Barn Swallows and House Martins along with a single Pallid Swift were engaged in the feeding frenzy and Black-headed Gulls could be seen making their way to and from the pantaneta.

Having had a quick scope from the road I than made my way across to the causeway to check out the new water and, as I approached, a lone Grey Heron flapped away to the north.  Other than a handful of Avocet and a couple of Black-winged Stilts the water seemed empty but closer inspection soon revealed the first Dunlin followed by a number of feeding (Iberian race) Yellow Wagtails.  Then a single Water Pipit, Snipe and Moorhen whilst from the far side I could see numerous Jackdaws making good use of the "nest tower."  Feeding on the ground were numerous Corn Buntings and House Sparrows.

Returning to the main mirador via the car park I could immediately see that whereas there appeared to be plenty of water the reality was that it was even more scarce than on my last visit.  Those Flamingos that had chosen to remain were now very distant and in small groups, hence the opportunity to use the scope to find the single Lesser Flamingo.  Nearer me, in addition top the resting Black-headed Gulls and Gull-billed Terns were over a score of Shelduck.  Just about possible to get a quick look at the very small number of Dunlin before they disappeared left.  Further out and away to the left were a number of resting Lesser Black-backed Gulls.

Making my way round to the main hide overlooking the pantaneta I watched a small charm of Goldfinch and then closer views from the hide of Avocet, Flamaningo and Black-winged Stilts along with Moorhens, Little Grebe and Mallards.  The Common Pochards all seemed to be resting on the bank at the far end.  Moving on to the small hide I was able to watch a pair of Red-crested Pochard.

The walk along the path below the mirador to the causeway gave me chance to get a closer look at the single Temminck's Stint and another Water Pipit.  Spotless Starlings were in the air along with a Collared Dove and a small flock of (small) waders accompanied by a sole Lapwing flew overhead. From the causeway itself I picked put just the one Wood Sandpiper.  A couple of Little Ringed Plovers were seen before I made my way back to the car to carry on round the water, passing a single Cattle Egret which had arrived at the flooded field, and check out the woods/fields at the far end using the track that led to Campillos.

Very little to be seen on the outward journey other than a resting Common Kestrel, a few Crested Larks plus a Buzzard on top of a ruin.  Reaching Campillos I made quick stop at Laguna Dulce to confirm no water and only House Sparrows in the picnic area and Corn Buntings in the trees in front along with a very distant Marsh Harrier at the back before returning to Fuente de Piedra by the main track at the back.  This route certainly proved more productive as I added Northern Wheatear, Hoopoe and Red-legged Partridge.  In addition there were small mixed flocks of Serin, Goldfinch and Linnet.

Eventually back at the water I took a further look at the scrape below the causeway and was rewarded with the sight of the Italian sub-species of Yellow Wagtail that had been seen yesterday.  In addition the Little Stints were back whilst the Redshank had moved across to the flooded field.  The end of a very pleasant day. 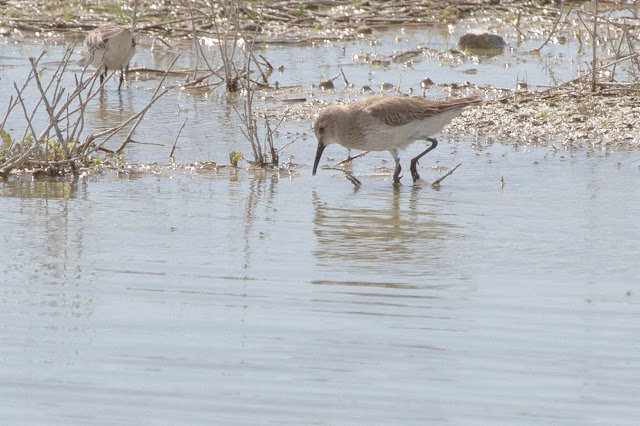 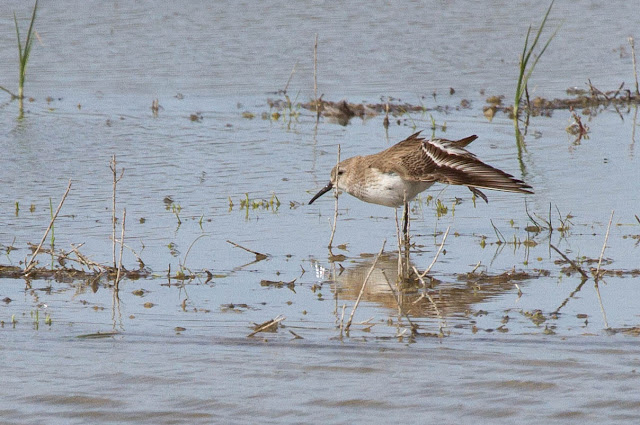 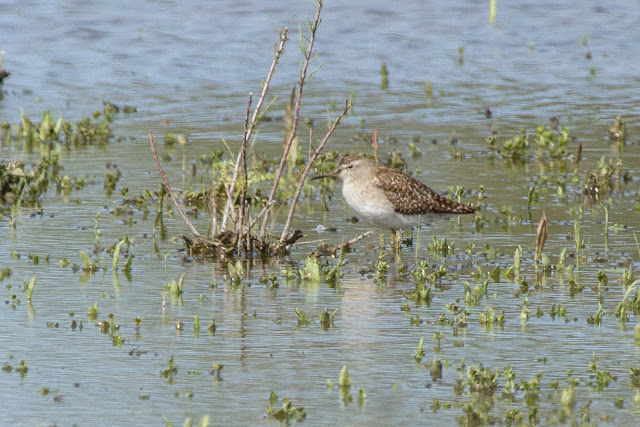 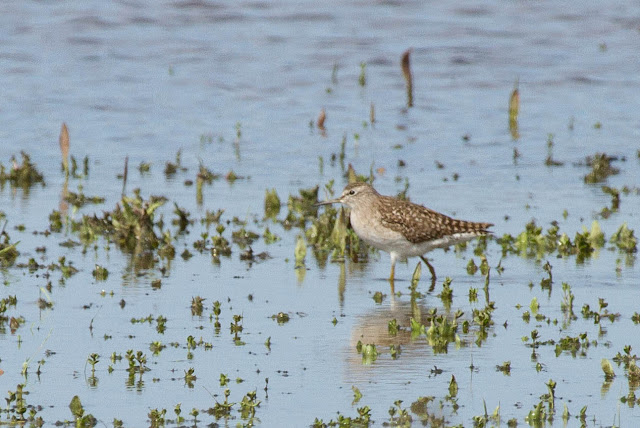 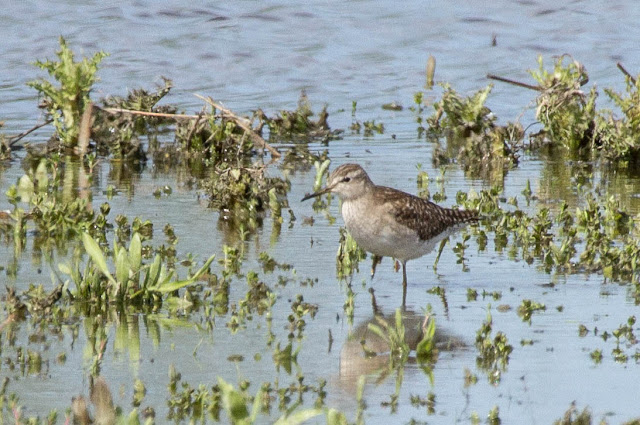 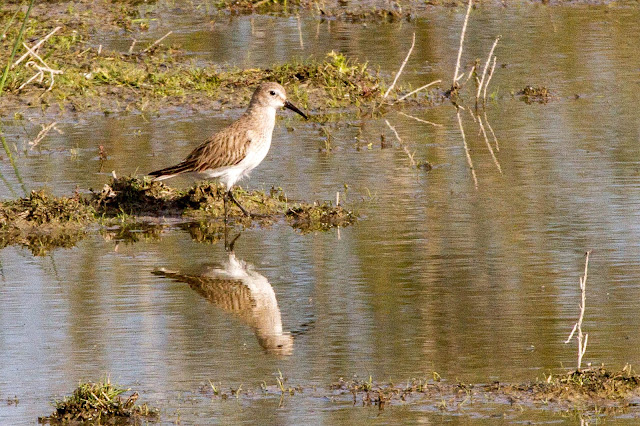 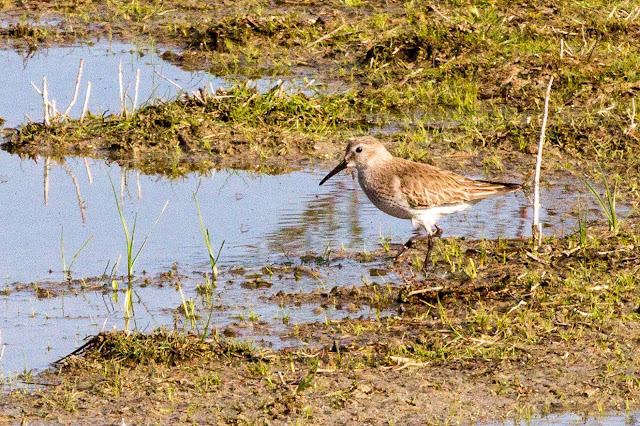 
Check out the accompanying website at http://www.birdingaxarquia.weebly.com for the latest sightings, photographs and additional information.
Posted by Bob Wright - The Axarquia Birder at 00:55