Just received the report form John of his and Jenny's third day in the Donana National Park and surrounding area.  This time they were off to the Odiel Marshes (Marismas del Odiel) and Jenny managed to capture some lovely shots of that delightful little exotic, the Common Waxbill.  I wonder here they will be on Thursday?

Another glorious day to start with but clouded over in the pm.

Odiel Marshes were our target for today but we stopped off at km13 to pick up the Common Waxbills.  Lots of Nightingales were singing as we parked up at the brick hide, a few Barn Swallows and House Martins were noted above as well as two Cattle Egrets and three Purple Herons.  The water level is quite high here today but we did see Mallard, Red-crested Pochard, Coots, Moorhen and two Purple Swamphen.  A Night Heron flew across the back of the lake and above it a Little Egret circled before coming to land over to the left of the lake, but out of sight.
A Reed Warbler flew into a small fir tree to our front, and then a Common Waxbill appeared in a bush directly to my front.  It spotted me so it flew onto a fence post, where I managed to get a couple of photos.  It then disappeared for a few minutes and came back with two other birds.  This occurred several times and gave us great views of this "foreign", but very pretty bird.

Then a Squacco Heron flew overhead not stopping her though and a Green Woodpecker was heard but not seen, but not in the case of the Cetti´s, Sardinian Warblers and the Zitting Cisticolas. 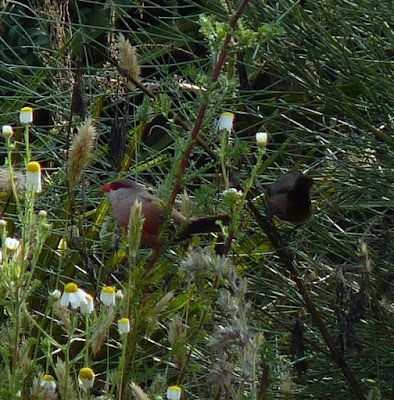 There was one small patch of mud to the very right hand side of the lake and we saw Ringed Plover and another Purple Heron here.  As we left this site for the Odiel Marshes themselves a few Azure-winged and a Common Magpie came out of the strawberry tunnels.
After parking at the Centre we scanned the estuary mud for waders whereupon we found Dunlin, Curlew Sandpipers, Grey Plovers, Whimbrel, Ringed and Little Ringed Plovers and two Turnstones flew upstream.
Over in the shrubs on the far side we spotted two Blue-headed Wagtails, and on the mud below a Little Egret landed, while above Barn and Red-rumped Swallows, House Martins and Common Swifts were feeding.  We had to keep out of the way of several coach loads of young children here today, so we headed for the small pier.  Here we found Common Sandpiper, Turnstones, more of the afore-mentioned plovers and three Kentish Plovers.  A juvenile Sandwich Tern was preening on a buoy and three Avocets flew past.  On one of the old wooden piles in the estuary a good number of House Sparrows had taken up residence.

We then moved on to the road to the lighthouse, having forgotten about the construction work and the amount and the speed of the lorries using the road.  Stopping along this road is now forbidden and we had quite a trek before we could get any good views of Little Terns that we could hear along the way.  Finally after parking we managed to get photos of Yellow-legged and Auduoin's Gulls, the hundred and ten (plus) Little Terns, Kentish Plovers and Whimbrels.  Just then my camera on/off switch broke. Oh Well, its all down too Jenny now.


We did find Spoonbills, more Grey Plovers, Sandwich Terns and a very splendid Black Tern.  Back to the hotel to pack for our leaving tomorrow.

Check out the accompanying website at http://www.birdingaxarquia.weebly.com for the latest sightings, photographs and additional information.
Posted by Bob Wright - The Axarquia Birder at 02:21