Just back from the ABS field meeting to the Sierra Loja and discovered why John and Jenny were not on their favoured home patch; they were off down in the Doñana National Park and a report of their activities on Day 1 had just arrived.  Let's hope John's cold does not curtail his birding activities.

Doñana National Park: Monday 25 April: Day 1 A chilly start but very warm (35C) later Traffic was quite heavy as we headed for Sevilla, but we did get views of Black Kites, Collared Doves, Spotless Starlings, House Sparrows, Cattle Egrets, Blackbirds and a few Barn Swallows.
Upon arrival we unloaded then headed for the SEO centre (forgot it was Monday, it´s closed), but we did see Spoonbills, Glossy Ibis, Mallard, Red and Black Kites, Greater Flamingos, while in the small bushes here we found Reed Warbler and Magpie, above us Common Swifts, Barn and Red-rumped Swallows and a few House Martins were also noted.


So now we turned our attention to the Dehesa de Abajo, where our first sighting was of Greater Flamingos, Common and Red-crested Pochards, Great Reed Warbler and Moorhen.  Looking up the left hand side of the lake we located a Purple Swamphen being severly chastised by a Black-headed Weaver, several times he actually hit the Swamphen before it flew off.  We noted three nests here although only one appeared occupied.  Several Common and Crested Coots about - the latter being all collared, one Night Heron and two Squacco Herons plus numerous Great Crested Grebes all "neck dancing" and several of its smaller cousins the Little Grebe.  A Cetti´s Warbler was seen in the reeds as was another Great Reed Warbler while above us lots of White Storks and Black Kites circled endlessly.  We then headed for the cafe (La Crux - on the roundabout), en route putting up a Purple Heron from a small pond plus Grey Heron and Little Egret. 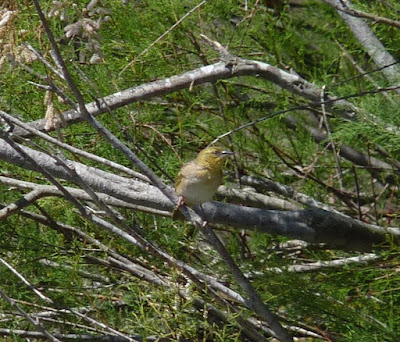 Heading back for the "Green Lane" we found Black Kites, Buzzard, three Whinchats and several Woodchat Shrikes.  In the bushes alongside the stream we saw Melodious Warblers, Nightingales, Sardinian and Cetti´s Warblers, more Grey Herons and Little Egrets.  As we passed one of the tracks leading to the Valverde Centre, a Booted Eagle flew over then a very pale Buzzard was noted on a fence post.


Two Roe Deer were seen as we passed through the bumpy road as well as good numbers of Bee-eaters, two Stonechats, a White Wagtail and more Woodchat Shrikes.


Now back to the hotel for a few well earned beers.


Lovely report and hope that your cold is soon gone so that you really enjoy your birding experience down south and west!


Check out the accompanying website at http://www.birdingaxarquia.weebly.com for the latest sightings, photographs and additional information.
Posted by Bob Wright - The Axarquia Birder at 02:50