With my son on an early morning flight back to the UK an ideal opportunity to take a look at what might be about down a the Guadalhorce in Malaga.  parked up and on sight before 9.30 and a couple of very pleasant hours or more before I was joined by a noisy, restless class of seven year olds; then another class followed by another class!  Fortunately, the classes caught me up as I was returning from the Sea Watch and they then took the beach so it was at the Laguna Grande that all hell was let loose.  Thank goodness I had arrived first and got at least fifteen minutes to assess the site before the climbing and pushing started.

Welcomed by a couple of Collared Doves the first birds seen moving along the track was a Sardinian Warbler and crossing the footbridge I had the usual Rock Doves whilst House Martins and Barn Swallows fed over the water below.  A pair of Moorhens paddled out from the far bank and then it was on the first hide overlooking the Laguna Casillas with a rather lovely Zitting Cisticola watching my approach.  Not a bust water today with just a pair of both Mallard and Little Grebes, double the number of White-headed Ducks and about up to eight Common Pochards.

Moving on to the Wader Hide I had my first sighting of the numerous Black-winged Stilts that were bossing anything and everything that cam within their range.  Indeed, the only other birds seen were a pair of Little Grebes, a couple of Coots, a male Gadwall and a pair of Ringed Plovers.  The occasional Goldfinch flew over and a Grey Heron came to rest in the far trees along with the odd Spotless Starling already in residence.

However, it was the old river, the Rio Viejo, that provided all the action and birds starting with finding the Greenshank that suddenly departed the previous water as I got up to move on.  In addition to the score or more Black-winged Stilts there was a pair of Avocet immediately below me and, as I looked more closely, I could see the small waders working the shore close to the corner and stretching back towards the sea. A couple of Redshank and a single Dunlin were followed by a handful of Curlew Sandpipers and many Kentih Plovers.  At the far end at least two dozen Little Egrets were resting together as a small flock and another three Grey Herons made their way to the old trees at the back.  A few gulls were present, mainly Yellow-legged with the occasional Lesser Black-backed Gull.  On the island towards the far end I watched a Redshank as a Shelduck paddled round and waited for the sleepy Oystercatcher to lift his head and be properly identified.

Moving on down to the Sea Watch I had a couple of Greenfinches followed by the first Serin of the morning but the sea was basically calm and empty with just a handful of Yellow-legged Gulls. Returning to the Ro Viejo I had a good sighting of a male Woodchat Shrike and on reaching the old river discovered that the Oystercatcher was still asleep but had been joined by a single Collared Patincole.  I also added Grey Plover, Sanderling and a couple of Crested Larks that were foraging on the shoreline.

A few Common Swifts flew overhead and Laguna Casillas produced a Common Sandpiper and a tree full of Bee-eaters before making my way round to the Laguna Escondida.  Again, relatively few birds on this water but the Gadwall had arrived to join a small number of White-headed Ducks and the odd Little Grebe, Moorhen and Coot.

before the arrival of the excited young children I had chance to take a good look at the Laguna Grande and noted the trio of sleeping Flamingos along with a good number of Grey Herons and three Cormorant.  Only the one Black-necked Grebe seen but plenty of Black-winged Stilts and, finally, a Little Ringed Plover in addition to another pair of Ringed Plovers.  Just as I saw the Spoonbill fly off towards the sea the gulls arrived.  A good-sized flock of Black-headed accompanied by a handful of Slender-billed Gulls.  On the far island in the top corner was a single male Red-crested Pochard and it was joined by a pair of Shelduck.  Nearer to me, a pair of Avocets were on the small island with what appeared to be an abandoned duck egg judging by its size. 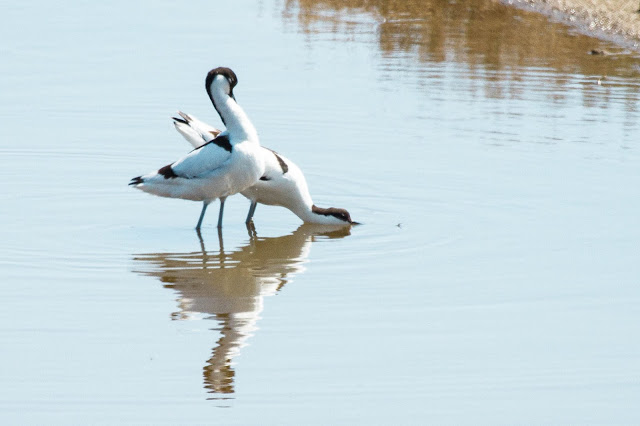 Time to make my way home and a pair of Red-rumped Swallows as I approached the footbridge. Just to make sure that I topped the fifty mark as I started for home I had House Sparrows, a handful of screaming Monk Parakeets, a single Blackbird and a quartet of Jackdaws for good measure.  And sill home before 2 o'clock!

Check out the accompanying website at http://www.birdingaxarquia.weebly.com for the latest sightings, photographs and additional information.
Posted by Bob Wright - The Axarquia Birder at 01:44