A week's birding leaves one week!

Just had a lovely report from Derek Etherton of a week's birding with Barbara and their house guest. Must have recorded well over an hundred species and what species they were too!  All this sought after birds so no sympathy that he now has a stinking cold but will it keep it at home?  I somehow doubt it.  Read on for Derek's illustrated report with all photograph taken himself.

A short account of 7 hard days of birding, not that the birding was hard but I developed a stinking cold [bought from the UK by guest].

We started on Tuesday morning with the intentions of driving the Campillos - Fuente de Piedra track and, in spite of the previous days rain, stuck to the plan.  The first part of this track was no problem but the latter part made me glad I had 4 wheel drive!  Having made a brief stop at Teba Rock to see Griffon Vulture, Chough and Alpine Swift amongst others, the first birds recorded off road were Little Owl, Hoopoe, Gold and Greenfinches.  The main purpose of taking this route was to show our visitor the displaying Montagu's Harriers and thankfully they did not disappoint, with two pairs conforming to wishes!  Yellow Wagtails, Lesser Kestrels, a Kentish Plover in the middle of a ploughed field and a few Gull-billed Terns hawked the fields.  Completely by surprise a couple of Little Bustards walked out in front of us.  The end part of the track was very sticky with sloppy mud and keeping the car straight was a bit of a challenge, but we did it.  Travelling the south side of the lake we clocked up the first of the days three Great Spotted Cuckoos amongst others.

Arriving at the visitors centre we met Peter Jones with 'customers' and as we chatted another Great Spotted Cuckoo perched up to be admired.  From the higher vantage point a solo White-winged Black Tern was spied with two Whiskered Terns and viewing well.  From the main hide Great. Flamingos, Mallard, Pochard, Avocet, Black-winged Stilt and many others were busy feeding. Another, or was it the same Great Spotted. Cuckoo posed in the bushes in front of the hide - thank you very much!

Back to the vantage point and very kindly the Lesser Flamingo was slightly apart from his big cousins and showing well, a 'lifer' for our visitor.  We ended the day on 75 species - shows how much is about at the moment.

Wednesday saw a planned visit to Guadalmar and the Guadalhorce.  This produced our first (3 actually) Purple Heron for the year.  Common Buzzard, Booted Eagle showed well and a single Oystercatcher was noted.  Four Whimbrel flew around, a single Spoonbill and Curlew Sandpipers were on the main lagoon.  After a quick tapa it was off to show off the nesting Bonelli's Eagles in the mountain behind our house.  The female is sitting on eggs at the moment but a 20 minute wait provided movement with a stretch and then a short flight.  A total of 60 for the day.

Thursday was a planned visit to Sierra Loja and a great and joyous occasion, the start of a new recording book!  Could we have something special to mark this occasion?  Maybe, but more about this a little later.  We started with Mistle Thrush, mixed finches, Azure-winged Magpies notable in the wooded area and, pleasingly, a couple of Red (or should I say Black?) Squirrels showed well.  Ascending the track we checked for the Eagle Owl; no luck there, but a little further on a Great Spotted Cuckoo showed briefly.  Plenty of red legged Partridge were about as were Woodchat Shrike.  A fine Iberian Grey Shrike took its usual pose on top of a bush.  A solitary Northern Wheatear and plenty of Black-eared variety were amongst the rocks joined by Thekla Larks.

The intention was to find an early Rock Thrush and after much searching with plenty of the Blue variety we eventually found a beautiful male sitting on the 'no hunting' sign near the top tarn. Continuing to search for more of this fabulous species we were checking the rock tops and found a Ring Ouzel.  Certainly unexpected at this time of the year and fortunately we could track its flight down to a lower tree.  On the return journey we were looking out for the bird, unusual to see them this time of the year and when we slowed for a view of a Woodchat Shrike the suspect bird flew across the track and into a bush.  Searching for it produced the days surprise and 'christening' for the new book, a Scop's Owl.  Wow what a bird, years of searching for one and we were sitting in a car 5 metres from it, unbelievable.  Its camouflage was so amazing that taking the bins down and trying then to locate it in the camera viewfinder proved a difficult job, but we managed it. 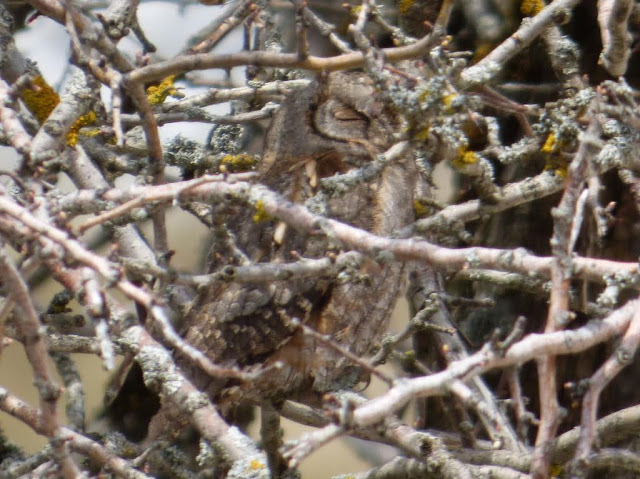 Before this super sighting we had had a male Montagu's Harrier pass low over us and super sightings of a Golden Eagle at the top.  48 for the day.

Friday was an early start to La Janda and Barbate to coincide with Saturday's ABS meeting.  La Janda produced amongst the highlights the first Squacco Heron of the year, Purple Heron, Purple Swamphens, Little Owl, Montagu's and Marsh Harriers and a flying display by a Spanish Imperial Eagle.

Saturday....was the ABS meet and a 'blog' of this is already on the ABS website.

Sunday saw us travel to Charca de Suarez, Motril.  Smashing reserve, perfect weather and produced the first Turtle Dove of the year for us.  Fabulous views of Water Rail, Reed, Subalpine and Sedge Warblers, Whitethroat and 4 Snipe.  Red-knobbed, or Crested if you like, Coot are a must for visitors, sadly our find was collared but showed well. Squacco and Purple Heron were roosting along with Night Heron and Cattle Egrets.  Common & Pallid Swifts wheeled around and Red-rumped, Barn Swallows and House Martins joined them.  Sadly we could not locate Red Avadavats but we did note a Quail calling in 'Turtle Dove Alley', however this could have been a caged bird in a nearby finca.  71 species for the day.

Monday....and my cold is stinking!  But I took our visitor out for early birding while Barbara wisely stayed in bed.  Zapata had its usual suspects of reed bed birds, a Purple Heron etc.  After breakfast it was off to Rio Grande which very disappointing with only Common and Green Sandpipers, Little Ringed Plovers, Kentish Plover and Greenshank of note.  Calling into another Bonelli's Eagle nest nearby caught both birds standing on the nest feeding one [or two?] of the fledglings.  After a little while the male [?] flew off for a couple of circuits around the rock face.  No count today as my man flu is really bad!

Wonderful times and wonderful sightings.  Certainly a few species during those past days that could well have been added to my on-going lit for the year.