A little nip in the air upon arrival to join the April meeting of the Andalucia Bird Society's field visit to the Sierra Loja and I began to think I had, perhaps, made the wrong choice in leg cover having turned up in shorts.  But not to worry, the sun was out, getting higher along with the temperature and, until we reached the top, very warm indeed. With over twenty members present, leader for the day Mick Richardson split the cars into two group wit me taking four of the cars off to the old quarry in search of the Eagle owl whilst he led the other cars nut with all of us coming together for lunch at the ponds above Charca de Negra.  Indeed, whilst at the quarry we were joined by another car as John and Pauline eventually discovered us!  By the time we had returned to the filling station on the motorway above Loja our little group had recorded almost 50 species.

Setting off for the old quarry we were able to record both Collared and Rock Doves along with Mistle Thrush, Blackbird and Spotless Starlings.  A Chaffinch rushed through the trees and a Raven rose from another and then, arriving at the quarry, most soon had views of a Dartford Warbler and the first of many Red-legged Partridges.  Many House Martins and Barn Swallows above with a few calling Choughs but no sign of the host at the Eagle Owl's nest.  However, on the cliff top we did count a handful of Ibex.  Looking back down the track we saw a rather lovely Woodchat Shrike.and a Red, or should I say, Black Squirrel ran up the tree in front.

Before leaving the area a walk into the quarry itself produced Black Redstart, Black Wheatear and Rock Bunting.  A Great Tit was seen and then the wonderful sight of a Goshawk working it way round the side of the mountain. 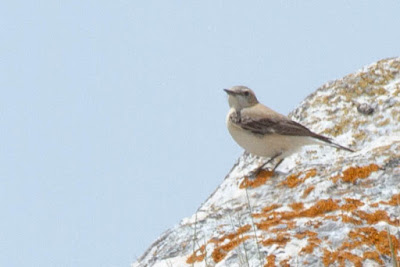 Working our way up the track we stopped to find the few Azure-winged Magpies in the area and were also rewarded with a close sighting of a Wren.  before long we were seeing many Jackdaws and Choughs along with regular sightings of Linnets and very many Stonechats.  The first of a few Blue Rock Thrushes was recorded and a Kestrel drifted away.  We even had a pair of Lesser Kestrels hawking above the water pool at the granite quarry.


Then the first of a number of Black-eared Wheatears and a couple of Hoopoes followed by a steady procession of Crested Lark sightings before we reached the pool above Charca de Suarez, seeing a (common) Magpie on the way, and joined the other half of the group for our picnic lunch.  Even here we had more Black-eared Wheatears along with both Linnets and Rock Sparrows.  In the far distance a lone Griffon Vulture was spotted and a small flock of Common Swifts passed overhead..

After lunch we drove on up and past the "fossil cave" and finally managed to achieve our target for the day when we found a pair of Rock Thrushes.  Great that every member of the group eventually had good sightings of these iconic summer visitors to the Sierra Loja.  No sooner had we seen our birds than an extra bonus on the other side of the track from the cliff face with both a resting Pied Flycatcher and a pair of Orphean Warblers in the upper branches of the same tree.  Leaving the top, not four but nearly forty Ibex feeding below. 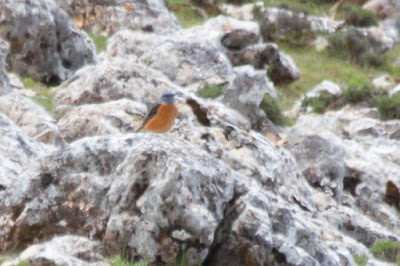 Time to start working our way back down the mountain with a final visit to the quarry lest the Eagle Owl was showing, it was not, but not before stopping to watch a passing Golden Eagle, then finding a female Spectacled Warbler moving around its traditional breeding site and yet a another Golden Eagle heading northwards.  However, the last new bird of the day was a single Black Kite with a well-worn tail seen over the quarry.  A wonderful day in great company and almost perfect weather. 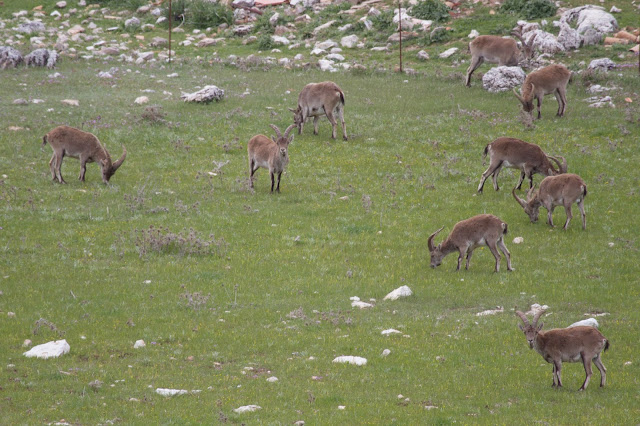 
Check out the accompanying website at http://www.birdingaxarquia.weebly.com for the latest sightings, photographs and additional information.
Posted by Bob Wright - The Axarquia Birder at 12:00