Sierra Loja with John and Jenny

Just received a report from John and Jenny Wainwright about their visit to the Sierra Loja yesterday. The good news for all those thinking of visiting next week is that the resident Eagle Owls are back on their traditional nest site.  Those who missed out last year may now get a second opportunity to see these magnificent birds, even if at a distance and with the need for optical aids.  That and the arrival of the Rock Thrushes certainly promises well.

A warm day but a chilly wind up top.

We started off at about 11am and headed for the tree line, missing out the hidden quarry until later on in the day.  At the cliff area we noted a pair of Blue Tits - nesting in a hole in the cliff face- bringing bugs into the nest.  Also about were Jackdaws, Great Tit, Spotless Starlings, Southern Grey Shrike and a Rock Bunting.

At the old quarry a pair of Griffon Vultures passed over, and in the shrubs here were saw Thekla Larks, Stonechats, a female Black Redstart, Woodchat Shrike and a Spectacled Warbler emerged from its last years nesting site. 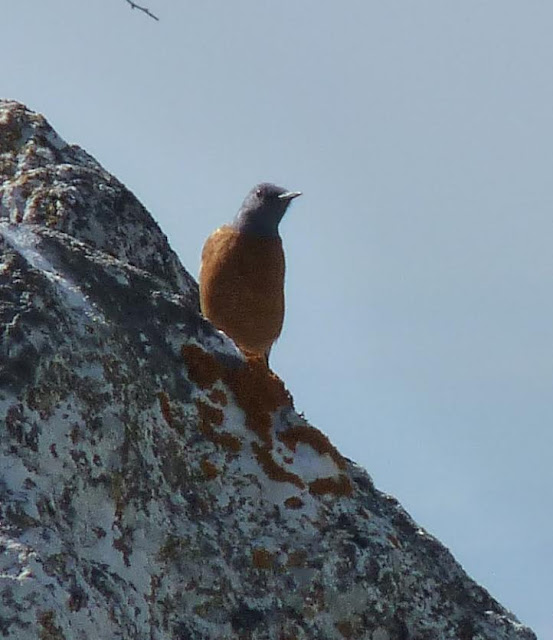 A few Black-eared Wheatears were logged en-route to the substation valley where we picked up a Little Owl, Rock Bunting and a Northern Wheatear.

Moving on up to the Charca ponds we could only locate Linnets, Stonechats, Barn Swallows and Common Swifts so we moved onto the fossil cave area, where we found a pair of Chough and a pair of Common Kestrels nesting and the latter being quite put out at the others close proximity.
Two Black Wheatears and a small group of Rock Sparrows were noted in the ruins below. Further down a Rock Thrush was displaying and he was seen to give a Thekla Lark a good chasing before going back to the task in hand.  A nice find was a patch of the Spanish Bluebell Scilla hispanica, which we have never seen here before.

On the return journey we stopped at the ponds for coffee and this time we spotted a Rock Thrush, Blue Rock Thrush both vying for the top of the rock, also two Black-eared Wheatears were seen along with a single Griffon Vulture and three Crag Martins.  In the valley just prior to the turbines we spotted eight Spanish Ibex bucks feeding.

As it was 19.30 we called in at the hidden quarry  - which was quite fortuitous - as the Eagle Owl was doing a spot of preening and good views were had.  Also about were Black Redstarts, Dartford Warbler, Serins, Goldfinches, Stonechats, Woodpigeons and another Blackbird.

Only two butterflies both Small Whites today but we did note lots of Yellow Ophrys Ophrys lutea and Mirror Orchid Ophrys speculum.

Another quite successful day to my reckoning.

Some fabulous sightings, John and can't wait to see what will be about next Wednesday week.  But will I have to wait until evening before the Eagle Owl puts in an appearance?


Check out the accompanying website at http://www.birdingaxarquia.weebly.com for the latest sightings, photographs and additional information.
Posted by Bob Wright - The Axarquia Birder at 07:16