First Nightingale and Wren of the Year

Had to go into Torre del Mar for a meeting so carried on down to the Rio Velez afterwards arriving just after 10.30 to be greeted by warm sunshine, clear blue skies and no wind.  Great!  Even the resident Rock Doves and Moorhens came out to welcome me back.  A very pleasant couple of hours followed including a trip upstream at the end and I finished up with 33 species including my first Nightingales and a Wren for 2016.

Moving slowly on down towards the hide there were many Blackbirds moving around and a Green Sandpiper took off in a hurry and headed downstream.  Arriving at the hide I found yet another couple of men harvesting the bamboo so began to think I would see nothing and certainly not helped when a trio of wild dogs wandered along near the river and then decided that this would be a great place to take a rest!  But all was snot lost as very soon I had a Woodchat Shrike posing nicely and ere long a few warblers began to put in an appearance.  With a Cetti's Warbler calling from the riverside a Reed Warbler arrived to feed quickly followed by a Whitethroat to my right and then I had a pair of Subalpine Warblers which seemed to have taken up territory in the meadow immediately in front of the hide.  All very exciting, especially when the dogs cleared off and the man got on with their work instead of prancing about. 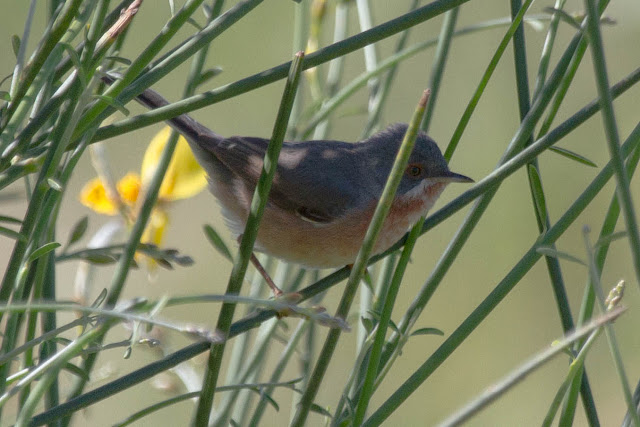 On the far bank I could make out a couple of Cattle Egrets and then a pair of Little Egrets moved downstream following the river.  The Green Sandpiper put in another appearance and first a pair of Goldfinches then a Serin came to call.  At least half a dozen Mallards about but mainly sen when they took to the air where they found feeding Barn Swallows and the occasional Common Swift. 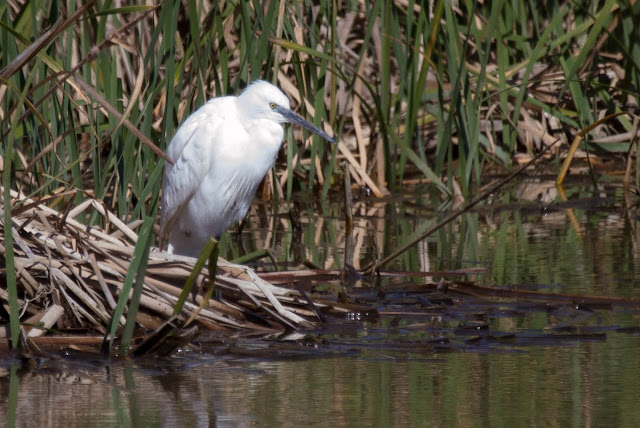 A walk to the beach found that the sea had risen very close to the land leaving little room to reach the lagoon.  Here I found a single Heron along with just one Black-headed Gull as a Coot meandered out of the reeds.  A single White Wagtail and a couple of Blue-headed Wagtails were foraging on the edges of the lagoon.

On the way back to the hide I was rather surprised to see a lone Sandwich Tern exploring the waters to the north of the lagoon but it refused to stay long enough to have its picture taken.

Walking back to the car I had Crested Larks feeding in the field to my right and having reached the stand of trees where I would expect to find Spotted Flycatchers when they arrive, I could hear then saw my first Nightingale of the year.  A Cetti's Warbler posed low in the tree and a handful of Serins did likewise a little higher and, noticing movement below, was in time to see a little "Jenny" Wren flit through the scrub.

Driving beyond the chimney factory and parking u I had a couple of Hoopoes followed by Greenfinches and more Blackbirds.  At this point, well behind schedule, the Monk Parakeet squadron flew over giving their usual raucous calls.  A very distant bird on top of a pylon was finally identified as a Little Owl.  My final birds of the morning were a couple of Red-rumped Swallows.


Check out the accompanying website at http://www.birdingaxarquia.weebly.com for the latest sightings, photographs and additional information.
Posted by Bob Wright - The Axarquia Birder at 10:39