It may have promised a wet and cloudy day here but in truth it was mainly sunny all morning followed by some occasional dark cloud and I think I may have counted a maximum of twenty rain spots.  Not so John and Jenny Wainwright.  They travelled over to Fuente de Piedra and got a dose of the real (promised) thing but, on the pother hand, certainly picked up some good birds as can be seen from John's report.


Fuente de Piedra 14 April A clear day, then rain , then turned quite warm, then more rain. As we had had some rain the other day we decided to pay a visit to the lagoon at Piedra, the forecast was clear. Still expecting the worst we arrived to see good amounts of water in the flood meadows and scrapes but still quite minimal in the lagoon itself.
As we entered the reserve two Black Terns were noted as well as several Whiskered and one Gull-billed Tern, also present here were Curlew, Wood and Common Sandpipers, Little Stints, tow Avocets, Coots, Moorhens, Black-winged Stilts, Black-headed Gulls and Jackdaws.  Parking upa Booted Eagle came over and hirundines were in good numbers namely Barn and Red-rumped Swallows, Common Swifts and House and Sand Martins.


As we walked along the stream towards the large scrape, a Reed Warbler put in a welcome appearance as did a Great Tit, Chiffchaff, Nightingale and Chaffinch and two Black Kite sailed over, Bee-eaters were heard but not seen.


On the large scrape fourteen Redshanks were noted as well as more Wood Sandpipers and Little Stints, a few Goldfinches about here and more Jackdaws.


It had been raining steadily now so we went directly to the hides, en route stopping to view the Little Owl that we had disturbed from the silver birches here, lots of Nightingales singing hereabouts, but only one seen. At the open hide we saw Red-crested and Common Pochard, Mallard, Little Grebe and Coots, then all the ducks on the bank suddenly dashed into the water as a loose dog went after one of their numbers (not successful, I may add). This brought about a fortunate moment as an adult and juvenile Night Heron appeared giving us good but brief views. A little while later a Great Reed Warbler burst into song from the large reed bed and a Great Tit sang from the tree lined banks. Several House and one Spanish Sparrow were logged here as well as two Gull-billed Terns and more Whiskered Terns, while a Wryneck started calling over by the sluice gates but neither Jenny or I could find it.


Moving along to the lagunetta hide we spotted lots of Greater Flamingos, while Shovelers, Red-crested and Common Pochard, Mallard were resting on the foreshore. A pair of White-headed Ducks and over a dozen Little Grebes with aforementioned ducks were in the water and on the islands, while Gull-billed Terns and Whiskered Terns flew endlessly across the lagunetta. Three Linnets, Cetti´s and Sardinian Warblers and more Nightingales were counted here.


Moving back towards the mirador we encountered Terry and Lyn (Axarquia members)and together we saw the Purple Heron  - that Jenny had spotted - emerge from the "open hide" area.  As we arrived back at the car park for some lunch a Wryneck called from the large oak tree but again we could not find it. After lunch we again looked over the boardwalk area finding the only Woodchat Shrike of the day, more Blue-headed Wagtails, Jackdaws and a Corn Bunting, and as we gained the road back to the car park two Greater Spotted Cuckoos took flight and another Booted Eagle was logged, along with two Marsh Harriers.

In addition to Black, Gull-billed and Whiskered we also had a good sighting of what could only be a winter-plumaged White-winged Black Tern. 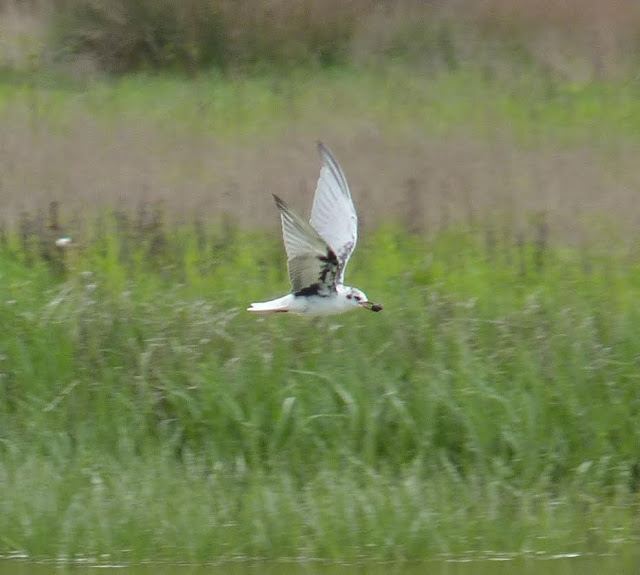 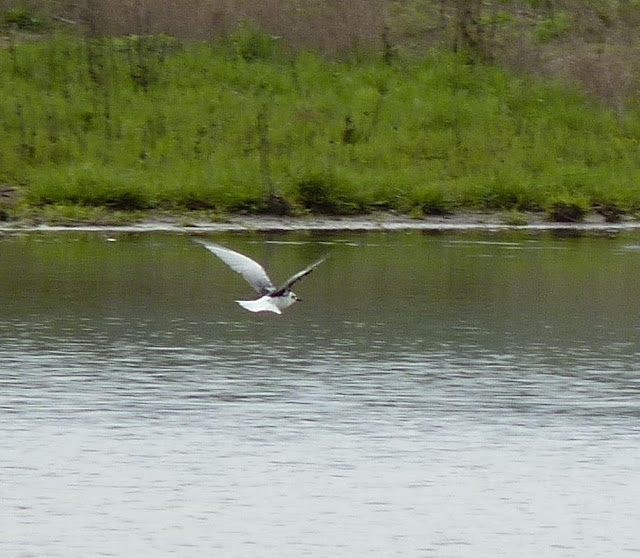 The sky was turning black again so we decided to cut our losses and go home, still a good days birding regardless.

Check out the accompanying website at http://www.birdingaxarquia.weebly.com for the latest sightings, photographs and additional information.
Posted by Bob Wright - The Axarquia Birder at 09:38