A chance to spend a couple of hours at the Rio Velez in Torre de Mar before joining friends at the weekly T-Dance in Trapiche and see how the winter maintenance creating a new lagoon in front of the hide has finished and noting the pair of Wood Pigeon as I approached from the west.  Most impressive and as yet not had a chance to develop a lot of growth at the edges good views of the banks and then many feeding waders.  Walking along the track to the hide I recorded House Sparrow and Serin in addition to the many singing Nightingales.  The narrow river held a few Little Ringed and Ringed Plovers plus a number of Redshank and Moorhen.  Initially, just the one pair of Mallard. Approaching the hide a Hoopoe away to my left and a handful of Spotless Starlings on the wires which were then joined by a small number of Monk Parakeets.

Once inside the hide wonderful views of the many waders, especially Redshanks and Common Sandpipers.  Working the edges I soon added a number of Dunlin and more Ringed Plovers whilst on the island ahead of me a couple of Black-winged Stilts.  At the far end a few Mallards and more Moorhen.

Perhaps the highlight was the single Whiskered Tern that spent the whole time flying up and down the water in front of me feeding on the insect life on the water itself.

More scanning of the edges then produced a lone Sanderling whilst above me many Barn Swallows and House Martins.  Taking special note as the hirundines flew around the area I also picked up a couple of Red-rumped Swallows and towards the sea a number of both Common and Pallid Swifts.

Time to walk on down to the beach so that I could look back up the main river channel and here more Mallards, single male Gadwall and more Moorhens plus a pair of Common Coot.  Immediately in front of me a couple of Little Ringed Plovers and a single Black-headed Gull.

Next a walk upstream on the far, western, side of the river which produced Reed Warblers and more Nightingales and Blackbirds. Arriving back at the car I also added a Collared Dove and, naturally, the resident Rock Doves. The last bird seen as I made my way under the old road bridge to check the growing fields upstream was a male Black Redstart.

Only birds added upstream were a Green Sandpiper and a most handsome Woodchat Shrike plus another Hoopoe and more Barn Swallows. 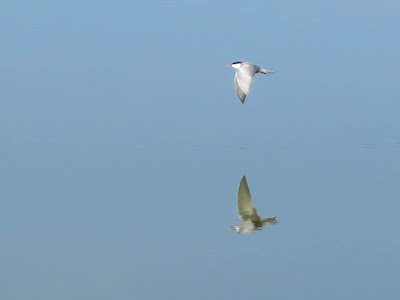 Check out the accompanying website at http://www.birdingaxarquia.weebly.com for the latest sightings, photographs and additional information
Posted by Bob Wright - The Axarquia Birder at 13:17