This week's visit by the Arboleas Birding Group saw the party at Cabo de Gata with a follow-on to the Rambler Morales where some good birds were recorded, including late Common Swifts.  Must have been great to see the Red Kite and Bluethroats and more regular sightings of Iberian Grey Shrike are always welcome.  I look forward to joining this little band of happy pilgrims when we visit El Fondo on Saturday morning.


Hoping for some migrants, Gilly and I headed to Cabo de Gata early in order to do the rear of the reserve before we met up with others from the group later.  As we passed the beach we saw Audouin's and Yellow-legged Gulls on the beach.  Once on the track we saw Stonechat and Chiffchaff flitting along the wire fencing.  Some Ringed Plovers were on the first salina.  A Marsh Harrier flew over.  We flushed a covey of 12 Red-legged Partridge as we came down from the ruined farm buildings.  Closer to the waters edge now we had good views of Sanderling, a young Dunlin and a Slender-billed Gull.

Gilly spotted a Iberian Grey Shrike.  Back in the water were Avocet, Greater Flamingo and Black-winged Stilt.  Further along we had Zitting Cisticola and Sardinian Warbler before everything took off in panic as a female Sparrowhawk flew by landing in a nearby bush.  In the next Salina there were at least 100+ Shoveler and some Black-necked Grebe, Mallard, Shelduck and a Redshank.  A Sand Martin flew by.  Gilly spotted some Greenshank and a Hoopoe whilst I found a first winter Bluethroat.  As we reached the end of the track 4 Stone Curlew took to the air and a Red-rumped Swallow was seen.  We'd seen 32 species as we met up with Barrie P, Beryl, Barrie A, Jan and John at the Pujaire cafe!

After a coffee we made our way to the first hide.  On the wader front we saw a small flock of Black-tailed Godwit, Redshank, a Ruff, a single Bar -tailed Godwit, Avocet, Greenshank, Dunlin, Ringed and Grey Plover and Eurasian Curlew.

Again everything took to the air apart from the Greater Flamingo as an Osprey flew over and attempted to catch a fish.  We then had a steady stream of raptors come over.  Firstly Booted Eagles, then Honey Buzzards, but the rarest for us was a Red Kite.

A female Marsh Harrier came over.  I spotted a Northern Wheatear on the power line.  Also seen were Iberian Shrike, Common Swift and a Whinchat.  Little Egret and Grey Heron were also added before we headed to the second hide.
Nothing to speak of out to sea.  On the walk to the hide some of the group spotted Stonechat, Greenfinch and a Pied Flycatcher in the shrubs.  Barrie P found some Spectacled Warblers with an Iberian Grey Shrike.  Barrie A spotted an obliging Bluethroat.  Gilly found a distant flying Raven. Barrie P added a juvenile Black-eared Wheatear whilst I found a juvenile Woodchat Shrike.  Gilly counted 427 Greater Flamingos

At the public hide John saw a Turnstone and Curlew Sandpiper.  We also had Greenshank, Black Necked Grebe and Avocets.

It was then lunchtime so we adjourned to our usual cafe next to the beach in Cabo village.  I somehow missed the 5 Whimbrel flying past!

We then convoyed towards the Rambla Morales.  A pair of Raven were seen perched on concrete posts.  At the pool things were quiet in comparison to the earlier birding.  We added Teal, Coot and White-headed Duck.  A small swirling flock of Sand Martin was near the beach.  Barrie P heard a Cetti's Warbler.  Gilly and I had the female Sparrowhawk as we made our way to the campsite.

A great days birding in good company.  Checking both lists, Gilly and my list from earlier and the group's list, I think we saw about 60 species.
Photos by Gilly and I.
Regards, Dave


Check out the accompanying website at http://www.birdingaxarquia.weebly.com for the latest sightings, photographs and additional information
Posted by Bob Wright - The Axarquia Birder at 09:19 No comments:

A dozen members of the Axarquia Bird Group at the Charca de Suarez this morning along with a few guests in very clear and warm weather.  As soon as I turned into "Turtle Dove Alley" at 8.50 with my brother-in-law Chris Sprinks we had a Sparrowhawk pass over and alongside the car before noting both Collared Doves and House Sparrows. A couple of Crested Larks on the road and then a small flock of Serin before our first female Red Avadavat.

Then it was round the corner to the Charca and straight to the Laguna de Taraje where we met up with Barrie and Jan Avis plus Lindsay Pheasant and Micky Smith.  What a forty-minute period this was to be.  Forget the single Mallard as we encountered a quartet of Purple Swamphen then the feeding Bluethroat.  As we  were watching the latter a Water Rail decided to cross right in front of the bird and continued to make sporadic appearances.  If this was not enough, a Little Crake ventured out of the reeds and was promptly seen on its way by a second Water Rail.  A Little Egret flew over and then the long-staying White Stork walked by at the back of the water. Moorhens began to appear and then a single Green Sandpiper came to visit.  Meanwhile, we had been joined by John and Jenny Wainwright along with John and Lyn Ross and friends.  This seemed to be an open invitation for hardly had we got the bird in our bins than we started to have an almost mass input pf both Red Avadavats and Common Wasbills.  Finally, both a Raven and a Cormorant flew over before a White Wagtail landed in front and we made our departure. 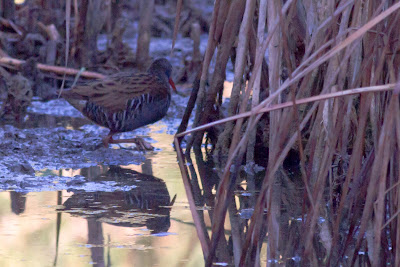 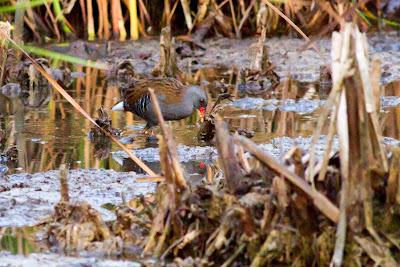 The new hide at the far end of this pool usually produces nothing but on this occasion we had many Moorhens along with a Green Sandpiper.  Micky was sure that he had seen a Jack Snipe skulking on the edge of the reds on the opposite and and then the appearance  of a small mystery wader which lead to many blurred photographs as we looked into the sun and all sorts of suggestions to identity before we, I think unanimously, settled on a juvenile Dunlin.  The first Barn Swallows were seen overhead as, after a very brief stop at the Laguna del Alamo Blanco, which only produced a few Mallard and Moorhen, we mad our way to the main hide.

Having seen our first European Tree Frogs Hyla arborea of the morning we soon settled into the hide overlooking the Laguna de las Aneas and the sun full in our faces.  Lots of Coots and Moorhens and another couple of Purple Swamhens.  Two Herons perched in a tree and a further individual on the far side of the water as the Barn Swallows overhead accompanied by the occasional Sand Martin.  Even a couple of Black-headed Gulls headed in for a rest.  Searching the ducks, in addition to the Mallards we found both Common Pochard and at least a quartet of Ferruginous Ducks.  On the island a quartet of resting Little Egrets along with a pair of juvenile Flamingos.  Not just Coots on the water but also a small number of Little Grebes and then the first Kingfisher flashed over.

Walking towards the Laguna del Trebol we picked up both Spotted and Pied Flycatcher and on the far side there were three Chameleon Chamaeleo chamaeleon resting quietly for all to see who knew where to look!  On the water itself a number of Red-knobbed Coot, mainly without collars, along with Common Coot and Moorhen.  Also on this part of the track we had a visit from a lone Hoopoe that seemed happy to escort us towards the Laguna del Lirio where nothing new was to be found.

So back to our starting point at the Laguna del Taraje for a final visit before departing home.  We were joined by John and Jenny plus Micky and Lindsay and had some more very close views of the Red Avadavats along with Bluethroat, Serin and Chiffchaff.  A Cetti's Warbler picked its way through the undergrowth but no further sightings of either the Little Crake or Water Rail.


Also seen by others, inlcuding John and Jenny, during the morning were Blackcap, Willow Warbler and Red-rumped Swallow. 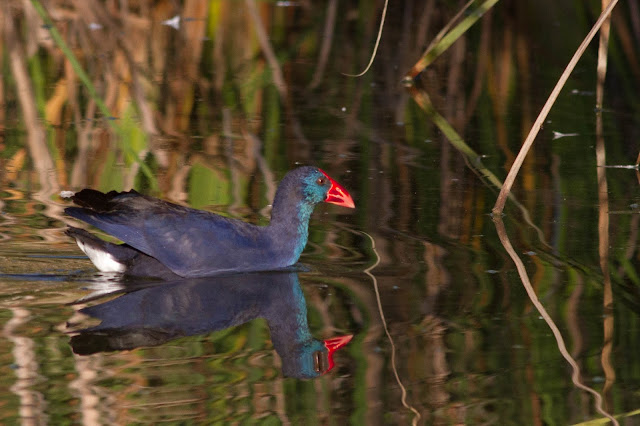 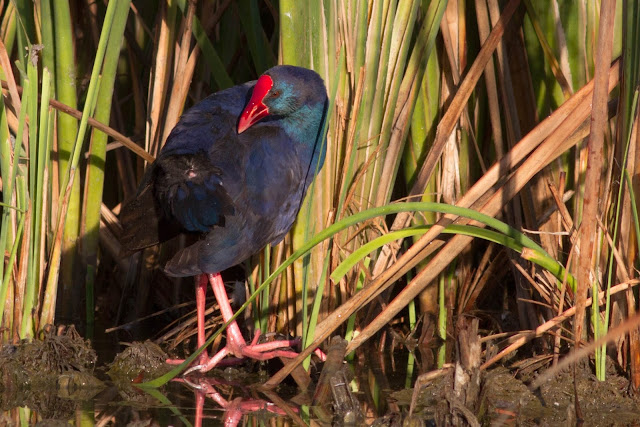 Check out the accompanying website at http://www.birdingaxarquia.weebly.com for the latest sightings, photographs and additional information
Posted by Bob Wright - The Axarquia Birder at 12:38 No comments: