Out of the apartment at 6.45 and ready to start my visit at the Guadalhorce, Malaga at 8.10 and a bright sunny morning, with clear blue skies and the promise of day getting warmer by the hour. Last day of the month and the expectation of some new birds for both month and year, and starting this early before the massed visitors associated with a bank holiday week-end arrive in droves.  Welcomed by both Collared Doves and Blackbird I was soon crossing over the footbridge into the reserve with House Martins all around me, mainly to access the small puddle on the bridge itself for much needed nest-building mud.

Cetti’s and Reed Warblers were calling as I made my way from the bridge and the resident Rock Doves to the Laguna Casillas where I found a quartet of male White-headed Ducks, Little Grebe, Coot and Moorhen.  A couple of drake Common Pochards put in an appearance and over the water the first of the morning’s Barn Swallows.  Greenfinch were calling behind me and then a Sardinian Warbler crossed the track as I moved on the Wader Hide.

Once settled in the hide I managed to undertake a count of the Black-winged Stilts and also note the resting Little Egret and a couple of Redshank.  A Yellow-legged Gull flew over the water and a pair of Serins in the trees behind me. A Kestrel was resting atop a nearby tower.

Much time was spent checking out the old river, Rio Viejo, with, despite the high water level and no exposed islands held a number of wader species.  Half a dozen Dunlin on the near water’s edge along with a single Curlew Sandpiper.  Plenty of Ringed Plovers and watching them scurrying back and forth led me to find the pair of sleeping Grey Plover. On the other hand, perhaps the best sighting was that of the single Bar-tailed Godwit in full summer plumage.  Out on the water itself more Black-winged Stilts and a pair of Shelduck before finding the Purple Heron.  This individual was joined by a second at the wider, northern end of the pool on my return walk from the Sea Watch – but nothing to see on the open water nor beaches.

A Crested Lark was on the meadow between the two canals along with a small flock of Monk Parakeets. A pair of Kentish Plover were on the ir breeding grounds on the opposite side of the track.  The return check of the Rio Viejo enabled to find fort a single then a pair of Marbled Duck on the far side.

Little to add at the Laguna Escidida other than another couple of White-headed Ducks so straight on to the main hide overlooking the Laguna Grande.  Here a glut of resting Sandwich Terns of which I counted 44 along with a few Black-headed Gulls and more Black-winged Stilts.  Lovely to see a mix of adult and last year’s juvenile Flamingos and then a lone Spoonbill dropped in for all of five minutes, so revealing the foraging Common Sandpiper.

Just after 11.30 and time to move on to my second main venue of the day, the Salinas at Fuente de Piedra but not before taking a slight detour along the upper Guadalhorce through to Zapata where I also added Common Swift, Little Ringed Plover and a singing Nightingale.

Given that I would be passing the confluence of the rivers Guadalhorce and Grande, I decided to make a quick visit along the main track next to the river. All looked very quiet at first with much water until spotting a pair of Little Egret and, almost immediately afterwards, a pair of Great White Egrets.  Continuing on as far as the ford and back I added Black-winged Stilt, Mallard and a couple of Little Ringed Plovers.  But a stop to check the brown-looking wader resting on the far side island revealed itself to be a Collared Pratincole which then joined another couple to work the waters in search of a meal or two.

Finally, reaching Campillos I stopped at the, also full, Laguna Dulce where I found very many Flamingo and Coot.  On the far side a small number of Red-crested Pochard and Gadwall plus the occasional Shoveler and Mallard. Little Ringed and Ringed Plovers along with a single Sanderling were working the edges to my right and over the water the occasional Gull-billed Tern and a number of Barn Swallows. A Hoopoe was calling from the far side and a Corn Bunting was in full voice atop a small tree to my left.

Finally on to Fuente de Piedra for my last hour passing Wood Pigeon, Corn Buntings, Serin and Crested Lark and the main action would appear to have been on the flooded entrance field to the left.  Raven on a pylon at the entrance and a Blackbird in the copse at the on the left and many Barn Swallows in the air around the water whilst on the flooded field were a number of both Flamingos and Avocets.

The constant movement of feeding Black and Whiskered terns over the water was a wonderful distraction from what else was visible including Shelduck, Redshank, a single Ruff, Black-winged Stilt and a Common Sandpiper. Even a couple of Turtle Doves to add to the collection of species at this entrance point. 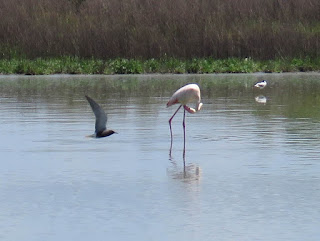 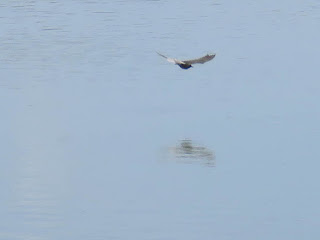 Moving round to the hide overlooking the Laguneta, I soon added more Shelduck and Avocets along with Red-crested and Common Pochard, Mallard, Shoveler and White-headed Duck.  Just the one Great Crested and another Little Grebe.  But then, on the far side, yet another couple of Marbled Duck.  A few Moorhen were present and as I made my way back to walk across the boardwalk Goldfinch, Great Tit and Jackdaw were observed.

On the main salina a large, distant raft of gulls but nearer a few Lesser Black-backed Gulls along with scores and scores of resting Gull-billed Terns.  Lots of calling Reed Warblers and taking the back track alongside the railway line I found not only many Spotless Starlings but a closer sighting of the nest-sitting White Stork on top of its tall chimney.  Crossing the level crossing the flash held more gulls and Gull-billed Terns but also a few Mediterranean Gulls.  Finally, in the village itself, my last species of the day was my first Red-rumped Swallow so giving a finally tally of 66 species. 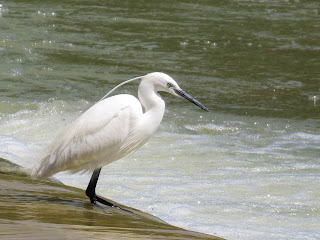 Check out the accompanying website at http://www.birdingaxarquia.weebly.com for the latest sightings, photographs and additional information
Posted by Bob Wright - The Axarquia Birder at 07:50