With the recent warm and sunny weather with us for at least one more day, I took a mid-morning walk down the last four kilometres of the Hamble river from Bursledon to its mouth at Warsash.  Mainly clear blue skies and warm sunshine as I encountered both Robin and Blue Tit at the start before noting the handful of Black-headed Gulls feeding on the shore as the tide approached its half-way mark.  A Carrion Crow was foraging to my right as I moved away downstream a few Herring and only the occasional Black-headed Gull. The occasional Oystercatcher present and no shortage of calling Robins, Blue and Great Tits.

Herring and Black-headed Gulls appeared in small numbers at regular intervals and before the boat yard a lone Canada Goose and total of five Mallards on the water close to shore. However, also present near the Canada Goose at the water's edge, a treat to see a visiting Whimbrel.  Wood Pigeons seen in the neighbouring trees along with calling Chiffchaffs.

A stop at the conservation to watch the activity on the now approaching water's edge gave me the chance to count the 51 feeding Black-tailed Godwits.  By the end of the walk the total had reached 64. A couple of resting Shelduck and a further three late n nearer to my destination.  On the path in front of a me a lone Pied wagtail and then a single Cormorant resting at the water's edge. 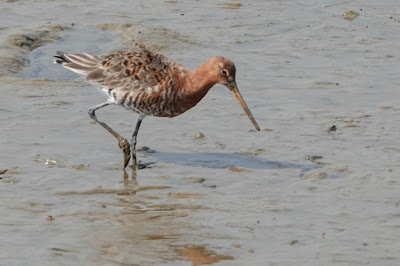 One thing seemed most apparent and that was the visible, by lack of presence, migration.  Not a single Brent Goose, Wigeon nor Teal let alone Redshank and Greenshank.  The winter visitors seemed to have returned to their breeding ground but at least I was able to welcome the newly-arrived Whimbrel. And as I reached the end of the riverside path a Magpie feeding in the neighbouring garden to take the morning's tally up to 17. 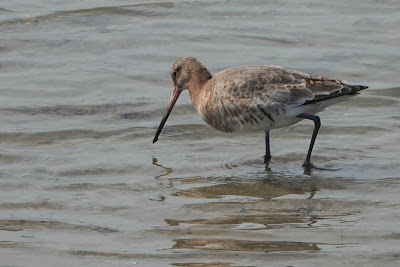 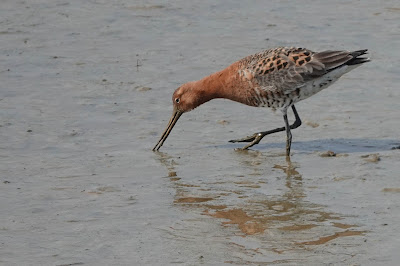 Check out the accompanying website at http://www.birdingaxarquia.weebly.com for the latest sightings, photographs and additional information
Posted by Bob Wright - The Axarquia Birder at 01:18