First day back in Spain and pulling up the blind the first thing I see is the returned House Martins working on their nests on the property opposite.  Jobs done I decide to take a wander down to the local picnic site at the Rio Guadalfeo in the hope that it will be deserted and no distractions. How wrong I was!  Collared Doves, Chaffinches and Blackbirds as I drive down the entry track to the parking area only to discover a 4x4 and large, yapping dog in and out of the water.  Fat chance of seeing anything here, I think to myself. However, a walk around the perimeter produces a pair of Great Tit and a few House Sparrows but as I make my way back to the car alongside the river I notice that the 4x4 is departing – but not the yappy dog.  Ah well, perhaps drive down the track and see if the Golden Orioles have returned  early.  Almost back at the car when I notice the dark “blob” at the river’s edge and then watch it dive fully under a couple of times.  Bins up and yes, as I suspect, the local Dipper is back on site.  Quietly creeping back to the car to retrieve the camera and hide behind the cover of trees but the bird has seen me and away to the opposite side near what has been the traditional, long serving nest site.  Despite all the interference over the past three years, could this mean that the nest site is still active?  On down the lane picking up Blackcap, Mallards and Cetti’s Warbler at the back of the water treatment site which also produced a Common Sandpiper, Coots and single, departing Cormorant.  Back home to rest in readiness for the evening visit to the Charca de Suarez.

Arriving at the vega behind the Charca de Suarez the drive along the Calle Patria immediately produced a Kestrel on the wires followed by Spotless Starlings and Blackbird.  A few Barn Swallows were feeding over the fields and then the first Common Swifts of the year. Looking at the field to my right I was immediately drawn to the thick bent object sticking up through the grasses.  Stopped and bins up to reveal, surprise of surprises, a Purple Heron which then took off and moved over towards the Charca reserve. Approaching the end of the lane to turn down the former “Turtle Dove Alley” I also found Collared Dove, House Sparrow and a Moorhen as a Yellow-legged Gull flew overhead.  Since my last visit the alley has been cleared but what a mess it is now.  Most of the rubbish seems to have been removed but that which could not has been simply pushed off the road to the sides.  In addition there must have been a serious fire and much damage, especially on the western side of the lane, and, of course, the fly-tipping seems to have resumed judging by the stack of discarded old tyres.

The Charca de Suarez reserve only open for ninety minutes during the breeding season I made my way straight to the Laguna del Teraje where, apart from the singing Reed Warblers, the only birds on show were the local Mallards. A couple of Great Tits, Cetti’s Warbler and Blackbird as I made my way to the hide overlooking the Laguna del Alamo Blanco.  What a treat!  Not so much the few Mallards but the Greenshank almost in front of the hide and just time to get a single photo before the bird was upset by more arriving Mallards and took off and out of sight to the back.

Not only the Sandpiper but also a departing Snipe.  Overhead more Barn Swallows and then the sight of a couple of Black-winged Stilts.  At this point a quartet of Glossy Ibis descended onto the pool.  A pair of Little Egrets were seen flying across the back of the reserve and I just happened to have my bins on the gap at the back of the water as a Water Rail wandered by but did not put in a further appearance; not surprising given the dense, tall grasses. 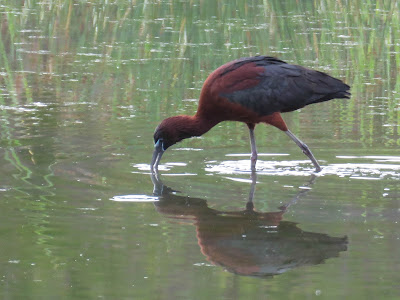 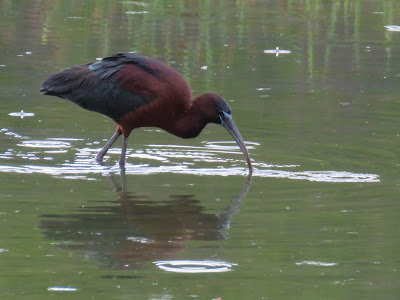 So on to the main hide overlooking the Laguna de las Aneas which held another selection of birds.  At east eight resting Cormorants but not a single gull.  Lots of Moorhen and a number of Common Coots plus mainly Mallards and a handful of Pochard.  Many calling Nightingales and at least a couple of Turtle Doves.  In addition to the many Barn Swallows a few House Martins were recorded and a couple of Purple Swamphens hidden at the water’s edge. At the very far end a Whiskered Tern was resting atop a pole but facing the wrong way from my perspective.

Making my way to the northern end of the Laguna del Trebol I passed a couple of Serin and, once on site, saw very many Red-knobbed Coots and more Moorhens.  Just the one Little Grebe before moving the hide at the southern end of the water.  From here a Purple Swamphen resting on top of the reeds and up above me the gathering Common Swifts as I finally left the site to return home. 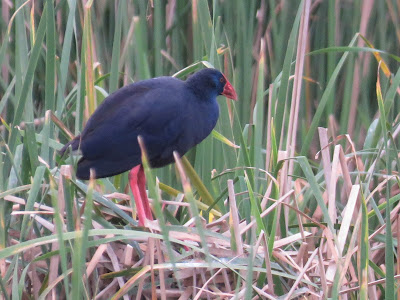 Check out the accompanying website at http://www.birdingaxarquia.weebly.com for the latest sightings, photographs and additional information
Posted by Bob Wright - The Axarquia Birder at 12:56