Beautiful birding day this morning with next to no wind, lovely sunshine in a mainly blue sky and, even if on the cold side, not too cold.  With that in mind I drive a mile or so to park at the top of Cowes Lane at the southern end of Warsash and then walked down Workman's Lane to the coast, almost at the confluence of Southampton Water and the Solent, before walking along the shore as far as The Scrape then back a little way to take the path back up to Cowes Lane. Almost 7 kms in about two and a half hours.  And what a magnificent morning it was.

No sooner had I left the car when I was being "blasted" by the singing Chiffchaffs and a couple of Blackbirds. Both Great and Blue Tits joined in the entertainment accompanied by a drumming Great Spotted Woodpecker which then flew over the road above me and, looking into the meadow on my right, a couple of Roe Deer.  Time to take a couple of photos before the deer moved further away and then I realised they had joined a further three individuals.

Meanwhile, both Carrion Crow and Wood Pigoen were to be seen and then a couple of Magpies. On the other side of the lane in the horse fields more Carrion Crows and Magpies along with Blackbirds and a Pied Wagtail.  The nearby bushes held both Robin and Dunnock and ere long I had found a trio of Wrens.  Continuing on down the track beyond the paved lane I had Greenfinches and Jackdaws plus some very voluble Song Thrushes. 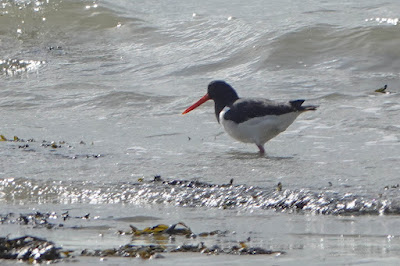 Finally, I reach the shore and just to my left on a small pond in the holiday resort a Moorhen and a pair of Gadwall.  The tide is working its way it and revealing some appetizing mud to the Oystercatchers, a single Redshank and a handful of Sanderling.  Only a few Black-headed Gulls at the moment but as I start to walk along the pat above the beach five Brent Geese fly on and more Black-headed Gulls are seen. To my right I stop to watch a Reed Bunting on the fence below and then spot my first new "tick" of the year as a singing Willow Warbler welcomes me to its territory.

The, approaching the Meandering Lake, I see my first of two Sandwich Terns fishing within ten metres of the shore. On the lake itself a single Little Egret along with a pair of Avocets, a couple of Shelduck and a quartet of Shoveler.  A closer look also notes both Mallard and two pairs of Teal. Next the narrow path next to the fence that leads towards The Scrape and here a couple of Shelduck resting on the grass between the flowering gorse bushes.  But then a Dartford Warbler puts in a most welcome appearance followed a small flock of Linnet.

Reaching The Scrape I see that the nesting Mute Swans are still present along with a pair of Shelduck, Coot and a lone Heron.  As I am about to start the return journey along the beach a single Great Black-backed Gull flies over towards Warsash and a Little Grebe appears in the centre of the water. At the same time away to my right a Cetti's Warbler is calling.

Almost back to the meandering lake and I stop to watch a second, closer, Dartford Warbler as I meet a couple of birders walking in the opposite direction.  At that point, a female Ring Ouzel landed to the right of a grassy patch in the middle of the gorse field and remained seconds before wandering out of sight. But not before being noted! With a very large smile on my face I reached the path leading away from the shore to the bottom of Cowes Lane.   Just before the end I stop to watch a dozen House Sparrows and a few Greenfinches in the tree in front of me and follow the male Blackcap that takes off to the next tree before pausing long enough for a photograph.

In the field to my left up to a dozen Starlings, a pair of Magpies and, at the very back, a foraging Fox. What a way to end the walk.

Posted by Bob Wright - The Axarquia Birder at 07:04