Two Titchfields for the Price of One!

Lovely sunny start to the day bit a very strong wind.  With Titchfield Haven Nature Reserve not opening until 9.30 I left in time to make a thirty minute stop at Titchfield Canal on my way, mainly to see if the Barn Owl was still at home. No sooner had I reached the path between meadow to the left and the field containing the old trees to my right that a couple of Jackdaw flew over and a Wren popped across the path in front of me.  A Great Spotted Woodpecker was drumming away in the trees to my left near the small car park and looking to my right there was our resident Barn Owl sitting at the entrance hole to the nest in an old, split tree.  Great.  having erected the scope to give some balance to the camera, looked round and the bird had disappeared. I suspect rather taking flight it had retreated to the depths of his nest, probably checking if the kettle was boiling so he could make a cup of tea before his daytime sleep!

Meanwhile, not only no shortage of Wood Pigeons but a small number of Stock Dove found in the same field along with the occasional Carrion Crow.  Looking at the floods at the bottom of the meadow, even with the sun straight into my eyes I could pick out a number of Black-tailed Godwit, plenty of Black-headed Gulls and a few Coot.  Moving further on to take a look at the second, larger, pool and also back at the first water now the sun was at an angle, I had a Jay rush past me through the nearby trees and then started to identify the many birds on and over the water.  In addition to the many Black-headed, I also found a few Lesser Black-backed and Herring Gulls.  A good number of both Mallard and Shoveler plus Teal, Gadwall and Shelduck.  More Coots, a handful of Lapwing but not a single Wigeon noted.  Then, skimming over the water, a feeding Barn Swallow.  The return walk to the car produced Magpie and Robins along with Greenfinch, Blue Tit and Blackbird.  And all the while the constant accompaniment of singing Chiffchaffs.

All done and off down the country lane to nearby Titchfield Haven.  Parking on the cliff top to scope out to sea in the choppy waters I did at lest produce a pair of Sandwich Terns flying south not too far off the shore. Black-headed Gulls on the shingle as the high tide had started to turn and Greenfinches calling in the bushes behind me.  Blackbird, Carrion Crow and Cormorant flew over as I made my way to the entrance and a visit to the Cottage Hide.  From said hide Coot, Gadwall and Shelduck were observed.  The nest boxes at the back of the Visitors Centre were home to both House Sparrows and Great Tits and, having purchased my day ticket, I made my way to the roadside viewpoint. many Mallards in the small harbour and at least two score Turnstones huddled together for shelter. A single Redshank at the far end and the viewpoint overlooking the mouth of the Meon produced more Black-headed Gulls, Cormorants and Coots but, as yet, no Common Tern.

Entering the gate to follow the track to the eastern hides my first stop was at the Meon Shore Hide (see photo at top) where I was almost overwhelmed by the hundreds of Black-headed Gulls.  On the other hand, I did also find a few Herring Gulls and on the back island not only a pair of Great Black-backed but also a pair of Mediterranean Gulls resting immediately in front of them.  Nearer to me, a pair of Avocet were busy feeding and really close a handful of Teal.

Away to the left rear a flock of about twenty Black-tailed Godwits huddled together and looking all set to depart in their new breeding plumage.  A little closer study also produced a number of Oystercatchers.

Nothing really to report from the West Hide so on to the Pumfrett Hide putting up a Heron from the entrance pond as I approached.  Better views of both the back of the South Scrape and and the North Scrape which produced, in addition to many seen from the Meon Shore Hide, a good number of Canada Geese and a few Lapwing.  Also noted a couple of Lesser Black-backed Gulls, a second pair of Avocet and the first sight of the quartering male Marsh Harrier.  I did visit the Spurgin Hide which was quiet with just the odd Coot, a number of Canada Geese and the pair of breeding Mute Swans. Also further views of both male and female Marsh Harrier.

Back to the exit with the accompaniment of the many calling Chiffchaffs and at least four Cetti's Warblers plus occasional Wood Pigeon to make a short stop at the Visitors Centre before setting out to visit the hides on the western side of the reserve. Lots more Chiffchaffs and singing Robins and Blue Tits until the loud song of the Song Thrush before turning left to visit the Suffern Hide.  From here I picked up  Little Grebe and closer views of the male Marsh Harrier. Also seen a hovering Kestrel above the reeds opposite the hide.

The Meadow Hide as might be expected produced very many Canada Geese and a few foraging Magpies.  However, it was, upon entering the hide, that I regretted not having camera to hand as a beautiful Jay posed on the fence post immediately in front of the hide.  More activity from the pair of Marsh Harriers and the chance to take flight shots, etc.   The walk on to the final hide (Knights Bank) simply gave closer views of the many Canada Geese, a couple of Magpies and a number of resting Herring and Black-headed Gulls.

Before returning to the car I made a final call at the Cottage Hide and was rewarded by the visit of Robin, Wren and Dunnock in close order.  A pair of House Sparrows arrived to make use of the feeders as did a couple of Wood Pigeon.

All quiet of on the water apart for one of the three nearby Mute Swans swimming in to view.  So back along the shore path noticing that the receding waters had brought in more Mallards to join the Turnstones and in front of the yacht club a large number of Herring Gulls feeding at the water's edge along with a single Sanderling.  A single Great Back-backed Gull was on the water a few metres further away and even a fly past of another Sandwich Tern to end the morning's birding. 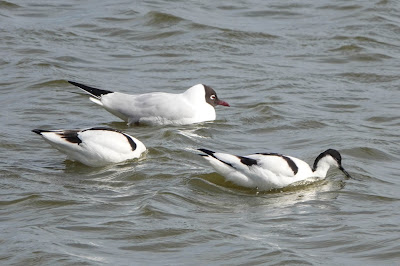 Check out the accompanying website at http://www.birdingaxarquia.weebly.com for the latest sightings, photographs and additional information
Posted by Bob Wright - The Axarquia Birder at 04:57