The wind from yesterday has gone; it's dry with a little cloud and the sun starting to peep through as I make an 8.30 start to walk along the Warsash village shore and on down past the spit onto Southampton Water, then continue past the "Scrape" to the "Meandering Pool" which lies beyond the beach within the Hook with Warsash Nature Reserve.  With family members coming mid-morning for the day best to get a move on and see what might be about.  Reaching the shore at very low tide all seemed to be quiet with just a single Black-headed Gull and a lone Curlew as I headed south towards the School of Navigation.  Then came the major problem.  Low tide resulting in very distant small waders, no scope and the low sun now shining straight into my eyes. However, I was able to pick out a few Herring and a few more Black-headed Gulls plus the occasional Carrion Crow.

Moving on towards the spit I added the overflying Wood Pigeons, a couple of Little Egret, a single Heron and a handful of Oystercatchers.  A Cormorant flew inland and a number of Redshank started to appear.  It was once at the spit and the nearer birds that I noted the relatively new arrivals of Wigeon plus a few Teal along with a number of Black-tailed Godwits.  More Black-headed and Herring Gulls were also resting on this sheltered water.

So on along Southampton Waer towards the crape with a score of Brent Geese heading up water and to my left a couple of Reed Buntings on the bushes. Once at the pool very many Black-tailed Godwits along with Teal, a few Wigeon and a single Little Grebe.  In addition, I found a quartet of Gadwall and a half-dozen Shoveler as well as a quartet of Little Egret and a second Heron for the morning.  Four Canada Geese were also resting on the water near the island.  Perhaps strange to find a lone Magpie on the small island and as I checked the water as a whole, a Kingfisher dashed down the stream below me, also revealing the perching Robin.

Walking the edge of the beach and then the path alongside the reserve I could but not notice the huge flocks of Greenfinch which totalled in excess of 150 individuals.  In addition, a Pied Wagtail and a quartet of Stonechat before the score of Starling took off from in front of me.  Overhead fifteen Jackdaw were heading out over the main water to who knows where, as more Brent Geese moved upstream. 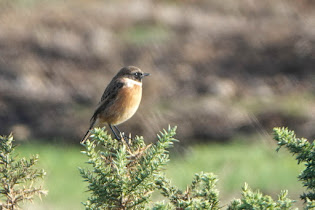 Nothing new to add at the Meandering Pool and as I started the homeward walk at least I now had the sun behind me. Many Meadow Pipits were noted along with a few Linnet and a small part y of foraging Long-tailed Tits.

Back at the Scrape I picked up a couple of Pintail at the very back of the water and as I watched a Wren make a hasty retreat from the bush in front of me the Cetti's Warbler started to let go with its loud song and even put in a brief appearance.  Finally, as I left the area not only more Greenfinch sightings but a charm of 40 Goldfinch plus a few Linnets. What also should be recorded is the sighting of at least seven Row Deer in the area and offering, usually, good photographic opportunities.

Then it was back to the spit where I came across a small flock of House Sparrows and once reaching the mud flats, with the tide now pushing the waders closer to me and the sun behind, I could pick out not only the many Oystercatchers and Curlews but the sores of Redshank. Now lots of Black-headed Gulls to be seen along with more Carrion Crows but also a dozen or so Turnstone and a few Dunlin and Ringed Plovers.  Just over a couple of hours and a total of 38 species.

I did think that was birding done for the day but, following lunch, we decided to take a very short walk up the Hamble River so that the three-year old great granddaughter could see the water and boats and were rewarded by a quartet of Little Egrets, Wigeon and Teal, a single Redshank and both Herring and Black-headed Gull.  However, the icing on the cake was the newly-arrive Rock Pipit that posed on the fence above one of the sluice gates, the first of the autumn.  Most enjoyable. 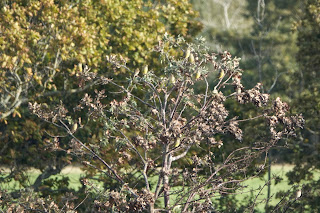 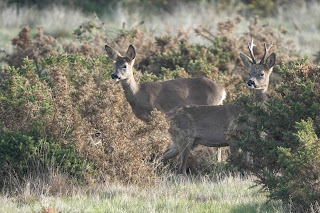 Posted by Bob Wright - The Axarquia Birder at 11:05