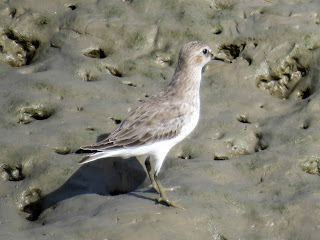 Back in Spain, even if only for about three days including one at sea.  Our cruise ship docked in Cadiz before 7 on Friday morning enabling me to find some birding – somewhere!  As it happened, I missed the last train so took a local bus about 10km to the neighbouring town of San Fernando where I was able to spend an hour or so wandering the sea marsh at low tide in glorious sunny weather, albeit most of the time straight into my eyes!  A most strange setup with track seeming to lead nowhere until you discovered the main path that led out towards the sea but, having crossed the main stream no way back unless you returned to the same small bridge.  Made for an interesting experience and just a shame so few birds to observe in the windy conditions which seemed to play havoc when trying to use the small camera.

Having passed a small flock of Flamingo, on arriving at the entrance point via a large sandy car parking area which produced no end of Rock Doves. Most surprising and rewarding to actually see a late Barn Swallow flying low ahead of me.  No sooner seen that a lone Little Egret passed overhead and a Green Sandpiper took its departure from somewhere below me.

Moving on a couple of Redshank and then the sudden flight in front of me over the exposed mud revealed a lone Curlew.  Working my way back from a very muddy path a Ringed Plover on the mud below me and then the sighting of a Grey Plover.

Meanwhile, after seeing first a Lesser Black-backed Gull I came across a few resting Yellow-legged Gulls accompanied by a handful of Cormorants on the bank of the main river.  Not only a change of gull but suddenly a few Black-headed Gulls to add to the variety of species seen on this short visit courtesy of the number 10 bus.

A Crested Lark took off from the path in front of me and then even more Stonechats rewarding me with their presence.  Finally, at the end of the walk, a single Common Sandpiper near the town on the still almost empty riverbed whilst a few Spotless Starlings were enjoying the experience from the nearby wires.

For the latest news follow the Axarquia Birds and Wildlife Facebook page for more photos and comments and the opportunity to share with the wider birding world.
Posted by Bob Wright - The Axarquia Birder at 08:32