Lovely start to the day so time for a late morning couple of hours at nearby Charca de Suarez in Motril where I met up with Steve and Elena Powell.  The usual specials, Red-knobbed Coot and Purple Swamphen, on show along with a Kingfisher that flashed across the back of the Laguna de las Aneas and a Bluethroat, first of the winter, foraging low on the reeds at the edge of the water of the Laguna del Alamo Blanco.

In addition to the Common Waxbills and Red Avadavats also seen at the latter, many more of the Waxbills, including some Black-rumped Waxbills, Serins and a Zitting Cisticola were also seen in "Turtle Dove Alley" at the back of the reserve.

Walking around the perimeter of the reserve we managed to discover both Pied and Spotted Flycatchers along with many Cetti's Warblers.

On the various waters very many Common Coots as and Moorhens along with a plentiful supply of Mallard, a few Shoveler and Gadwall and even a pair of Teal.  Maybe half a dozen Little Grebe plus a couple of Little Egret and a lone Heron whereas the far end of the main laguna held over a score of Black-headed Gulls along with two Cormorant.  Also seen was a passing Marsh Harrier. 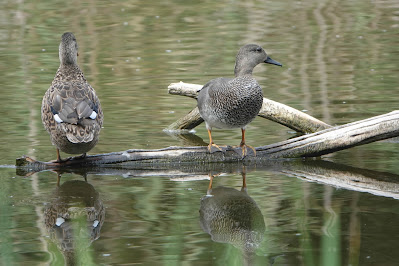 For the latest news follow the Axarquia Birds and Wildlife Facebook page for more photos and comments and the opportunity to share with the wider birding world.
Posted by Bob Wright - The Axarquia Birder at 05:00