Away from Alicante province just before 8 and on site at the freshwater lake in Roquetas de Mar by 10.45.  Calm, dry and sunny so ideal birding weather with next to no breeze.  The water itself was full of Common Coot and, close at hand a number of waterfowl including both Common and Red-crested Pochard, Shovler and a male White-headed Duck. Both Little and Black-necked Grebe were noted along with a few Flamingo and a good-sized flock of Black-headed Gulls.  Whilst watching I saw a late Whiskered Tern go cruising past and then found a second resting on the dead tree just offshore below me along with a couple of Moorhen.

As I moved on to visit the hidden small pool just inside the adjacent reserve I noted the resident House Sparrows feeding on crumbs left by the waste bin.  Once at the pond the local Mallards came looking for a feed along with the lone, long-staying Muscovy Duck. What a delight to suddenly see a Kingfisher dash across the water, my "bird of the day."  Moving on down along the now very dry salinas I stopped to check a small pool of water on my left and found a single Slender-billed Gull and a feeding Redshank.

A male Stonechat posed atop a low bush and a good number of Barn Swallows accompanied by a single Pallid Swift were feeding low above me as I drove on down to the first stretch of water.  Once parked I quickly noted the Turnstone on the rocks in front of me and many Flamingos at the far side plus a large raft of resting Black-headed Gulls away to my right.  Nearer at hand a small number of Lesser Black-backed Gulls.

Then it was on to the end of the track alongside the abandoned and ruined pumping station. Here the sight of very many Flamingos plus the above gulls but also including a few Yellow-legged and more Slender-billed Gulls.  On the rocky ledge just of shore a couple of foraging Glossy Ibis and in front a number of small waders including Dunlin, Sanderling, Ringed Plover, Redshank and a single Greenshank.  A couple of Black-winged Stilts put in a brief appearance whilst checking the distant stones where I found a couple of resting Cormorant.  A Little Egret walked along the ridge to me left and at the back of the water I watched a quartering Marsh Harrier move from east to west.

Time to start the return drive and move round to the opposite side of the salinas noting a couple of Crested Larks along the way.  Making a final stop at the freshwater pool I saw that a single Marbled Duck had turned up but no sooner arriving decided that its best place was hidden away under the branches of the little bare tree just offshore.  In addition, whilst checking the resting Whiskered Tern I discovered a handful of Glossy Ibis on the bank behind.

Arriving at the far beach I was surprised to see both my usual track and he main sandy car park for the beach were now both under water.  However, still able to walk the edge and climb over the dunes to check the inland pool where I found a couple of Flamingo and a pair of Black-winged Stilts but feeding alongside the latter a single Ruff.

A brief stop at the lane leading to the lighthouse to enable me to walk to the salinas proved somewhat wasted at first but, apart from many very distant Flamingos, I noted three Dunlin feeding immediately below me but, sadly, no other birds.  And as I was leaving the site, I also noted the feeding Willow Warbler in the tree immediately in front of me. 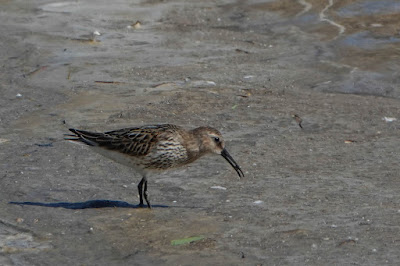 Back in the car for the relatively short drive across to that awful mess that surrounds the irrigation lake at Las Norias.  Having passed a number of Collared Doves and a Magpie as I approached, all very quiet with just a family of three Great Crested Grebes on the nearby end pool.  However, the waste ground at the end of the road before taking a left turn to access the causeway further down the water, proved no less than almost a score of feeding Iberian Yellow Wagtails.  Once at the causeway another eight Great Crested Grebes on the northern side but with major water works on the nearby southern side, just a single Little Grebe.  Finally, as I drove back to pick up the main road towards the motorway and home, a couple of Spotless Starlings crossed the road ahead of me.