Beautiful sunny morning with no wind and little cloud, albeit only 8C as I approached the roadside car park alongside Southampton Water near the mouth of the Meon at Titchfield Haven Nature Reserve.  Immediately obvious that there were birds on the lagoon on the opposite side of the road and with the tide on the way out I could also see a mass of white at the end of a stone spit off the beach. having already seen both Magpie and a pair of Moorhen as I drove alongside the reserve it was time to cheche beach first.

A Cormorant flew overhead and out to the main water as I checked the shingle spit to find a lone Heron and Oystercatcher along with a few Black-headed and a couple of Herring Gulls.  (Later in the visit as I was departing a large flock of the former had gathered to roost.)  Also present at the far end a score of resting Sanderling.  Looking the lagoon on the inland side of the road at the mouth of the Meon, a good number of both Shoveler and Gadwall with many more Cormorants and Black-headed Gulls.  A juvenile Mute Swan swam down river looking for its family and on the island a couple of Mallard plus a number of Lapwing and a handful of Coots. Behind the island a Little Grebe was diving.

Moving down to the viewing area for a better look at the island, I had a trio of Carrion Crows pass overhead and upstream a quartering Marsh Harrier.  Many more Lapwing and Wood Pigeons could now be seen, especially within the reserve itself.  And a little further ustream a group of four Pintail were feeding alongside the reeds.

As I moved to the Visitors Centre I stopped to admire the Robin singing away atop a bush on the opposite side of the road and noticed the resting Teal as I crossed the bridge and once stationed just inside the entry gate to the (closed) Visitor Centre I spent some time studying the large pine tree in front of me and the neighbouring vegetation.  Ere long a few House Sparrows and then the first of the Blue Tits followed by a Great Tit but, even better, a single Chiffchaff busy foraging amongst the pines.  On the ground I picked up the Wren and then moved round to the open little hide at the back to find more House Sparrows on the feeders and a Dunnock below.

Next, crossing the road, the gathering of about fifty Mallard plus the adult Mute Swans with their now well-grown and turning white cygnets before a little walk to just beyond the boat yard to check the far beach where I recorded the only Little Egret of the morning and nearer to me a small group of waders including Ringed Plover, Redshank and Turnstone. Having already counted to large flocks of Turnstone, these additional sightings took the morning's total to well over 70 individuals.

Time to make my way back and a short top at the viewing area coincided with me being able to see a Willow Warbler alight on the reed top and remain long enough for the conforming identification. And then, as I rounded the car to the back to pack away the scope, a Pied Wagtail walking the road behind giving me a total of 35 species - until I met the resident Jackdaws as I passed through Posbrook on the way home. 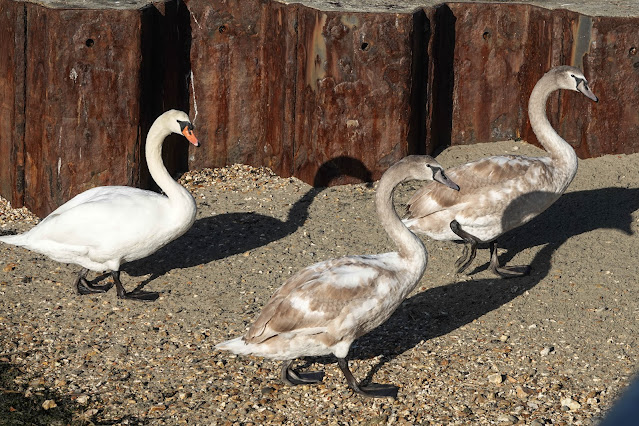 Me and my kids; how they've grown!

For the latest news follow the Axarquia Birds and Wildlife Facebook page for more photos and comments and the opportunity to share with the wider birding world.
Posted by Bob Wright - The Axarquia Birder at 07:01