It promised rain within the near future so decided I would drive up to the top of Workmans Lane in the Hook with Warsash Nature Reserve and walk down to the horse fields and see how the weather was developing once there.  Never mind rain, the sun came out, lessening cloud and no breeze, so after walking the bottom of the horse field and back continued on down to the shore, where the tide was now almost in, and then along the beach as far as Hook Scrape before returning to the beach exit and up Cowes Lane to the car.  A most enjoyable couple of hours covering almost 5 km.  And, maybe best of all, it was a morning for small birds rather than waders, etc.

No shortage of Robins as I set off down the lane with the occasional Carrion Crow in the fields on either side of the road.  A small gang of Rooks had gathered atop a dead tree to my left and once the first seen co sooner many more Magpies noted. Then, just approaching the entrance into the horses field, the first Blackbird of the morning.  From here to the far end of the bottom track and back a mass of small birds; mainly Linnet, Goldfinch and Dunnock to the bushy right-hand side and scores of Pied Wagtails and many Meadow Pipits on the field itself to me left.  A pair of Blue Tits put in appearance along with a couple of Robin.  In addition, the occasional Greenfinch and, by way of change, a lone Wren. Further back beyond the Pied Wagtails a good number of both Carrion Crows and Rooks along with a handful of both Magpies and Jackdaw plus a healthy supply of Common Starlings.

Once back out on the lane I continued to the bottom and then took the track down to the shore noting Wood Pigeon, House Sparrows, more Greenfinches and a couple of Stonechat on the way.  A single Moorhen on the pond immediately before the beach but very little on the water save a pair of Great Black-backed Gulls whilst the shore held a single Black-headed Gull and Redshank.  A Collared Dove was seen as I set off along the bank above the beach and ere long came across a feeding flock of 30 Turnstone.

So on to the Meandering Pool where I found 14 Teal and four Little Egrets along with a single Glossy Ibis and a pair of Mallard flew over the site.  Were the remaining three individuals that heave been present on site for over two months still feeding at relatively nearby Titchfield?

Leaving the two photographers to continue looking for the perfect shot of the Glossy Ibis, I carried on to the scrape.  Walking along the narrow path alongside the recently burnt area I could not help but notice the huge flock of Greenfinches, at least forty or more, and the accompanying Goldfinches and Linnets.  Still the occasional Meadow Pipit and at least half a dozen Stonechats but no Dartford Warblers on this occasion.  Yet more Magpies and Starlings.

Arriving at the scrape I was rewarded with the sight f over 70 sleeping Black-tailed Godwits and a further 50 resting Teal.  Three Little Egrets were noted along with a single Oystercatcher on the small island and off to the right a feeding Little Grebe.

Time to make my way back along the beach to the entrance to Cowes Lane and almost immediately a single Cormorant flying up water close to my shore.  But entering the narrow path once again in the hope of finding one of the local Dartford Warblers I came across one then a second Willow Warbler.  Lovely sight but rather than question my identification ere I had gone forty metres I found at least six more individuals.  Presumably these birds had been resting up during the recent rainfall and were now feeding up to continue on their migration south.  Many more sightings of the small birds already observed as I made my way back to the car plus, as an extra bonus, the sight of four Roe Deer resting in a field as I approached said Cowes Lane. 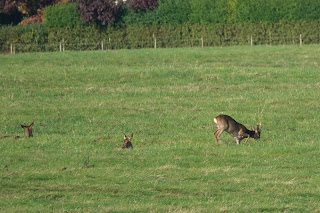 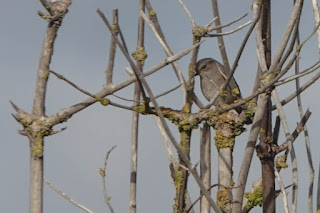 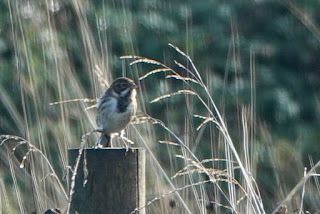 Posted by Bob Wright - The Axarquia Birder at 08:53