What a way to spend your final day in Spain before returning to the UK.  Not only a week-end with friends Barbara and Derek Etherton but an additional visit back to the Charca de Suarez reserve on the western outskirts of Motril - and rewarded with sightings of Wryneck, Kingfisher, Pied Flycatcher and Red Avadavat amongst the 44 species recorded.  Also accompanying us was Finnish birder, Esa Hamalainen staying with Derek and Barbara for a long weekend.

A great start to the visit as, apart from the immediate Collared Dove and Robin, we had a pair of very close Wrynecks busy trying to outcall each other and either a third or one of the above was then seen whilst we were at the penultimate hide. Entering the hide overlooking the Laguna del Taraje initially only Mallards to be seen but later we also noted a Grey Wagtail, Little Grebe, Common Coot and a Purple Swamphen. On entering the hid at the other end of the water we also recorded both Moorhen and a female Shoveler.

The newer Laguna del Alamo Blanco is still overcrowded with high reeds but a Heron posed on one of the perching poles and we then awaited the arrival of many smaller birds including Blackcap, and both Reed and Cetti's Warblers.  Walking on the main hide overlooking the Laguna de las Aneas we quickly added many Common Waxbill plus Willow Warbler and both Great and Blue Tits.  Next up Blackbirds, a female Pied Flycatcher, overflying Cattle Egret, Buzzard and a couple of Spotless Starlings.  Once inside the time and chance to study the water and surrounding vegetation, we quickly added both Common and Red-knobbed Coots along with Gadwall and many Mallard and Moorhen plus Little Grebe and a Glossy Ibis.

A couple of Cormorant and a dozen Black-headed plus two Mediterranean Gulls were resting towards the back and having found one Night Heron to the right we then added a further five resting on the poles beyond the island.  Five Herons and a quartet of Little Egret were followed by a single Muscovy Duck as a Kingfisher dashed back and forth across the water with a dozen or more Barn Swallows feeding above.

However, not so much the House Sparrows but the gorgeous Red Avadavat that came to feed immediately below the hide that came as a very special sighting. 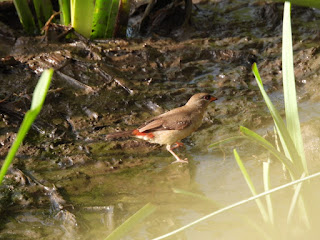 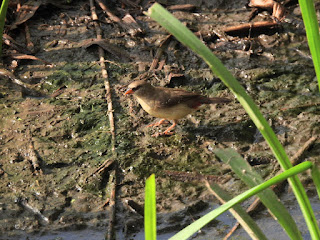 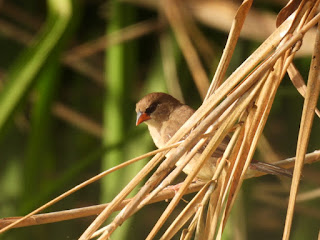 Moving on to the Laguna del Trebol we found more Red-knobbed Coots along with a lone Ferruginous Duck.  Also lovely to find three Chameleon Chamaeleo chamaeleon  in their favoured site.  Continuing on round to the far side Derek and Barbara encountered a couple of Greenfinch and then back to the Laguna del Taraje where the Grey Wagtail was still on show before ending at the large hide overlooking the Laguna del Alamo Blanco where we saw a handful of Stonechat along with a brief sighting of a quartering Marsh Harrier at the far back of the water.  Another Sardinian Warbler was seen and the last bird recorded was the "squealing" Water Rail.  After leaving the reserve we encountered a lone Kestrel as we stopped for tapas at the neighbouring bar.

Great birds, great company and a great send off.

Posted by Bob Wright - The Axarquia Birder at 11:52