With reports of a Marbled Duck seen on new Year's day, I was up and down to the local Rio Velez by 8.30 where I had a quiet but interesting couple of hours - and no Marble Teal, indeed no ducks other than five drake Mallards.  A clear sky with a very low sun but a stiff cold breeze to make sure that i did not remove my outer coat!

Welcomed by the first of over a dozen Blackbirds a couple of White Wagtails and a departing Cattle Egret (another 26 still tree roosting further downstream) I parked the car and took a gentle troll down towards the now vandalised hide.  A lone Ringed Plover on a pool in the river bed and then a Grey Heron flew over from the river to land in the neighbouring field to me left where it joined four other individuals and all five were still present when I returned.  In addition to the Cattle Egret roost mentioned above there were four Cormorants and a passing Collared Dove.  Cetti's Warblers were in full voice and the occasional House Sparrow put in an appearance.

Moving on down to the beach from the hide just a lone Spotless Starling then five foraging Moorhen on the grass this side of the reed-bed,  A Stonechat posed on a small twig as a couple of Black-headed Gulls flew overhead.  Out on the water itself there must have been well in excess of a couple of hundred Lesser black-backed Gulls and looking up the river a single, resting Heron and five Coots.  On the edges a couple of White Wagtails and a single Sanderling were feeding.


More calling Cetti's Warblers and a few House Sparrows as I made my way upstream on the western side and near the top was able to add Chiffchaff, Robin and another Great Tit.  Reaching the river bed a lovely Grey Wagtail before retracing my steps for the return journey.  Approaching the hide a lovely view of a most handsome male Penduline Tit with a pair of Hoopoe on the gate next to the pumping station.   Needless to say, the local Monk Parakeets put in an appearance.  Once back at the car chance to see another Ringed Plover and a hastily departing Snipe.


Under the road ridge, immediately finding another pair of Hoopoe, and further upstream through the growing fields where I found a score of Goldfinches and a handful of Serin. 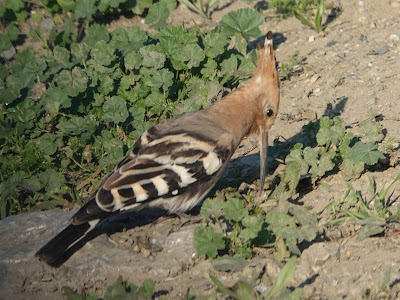 Many more House Sparrows and White Wagtails and then both a Blackcap and Black Redstart before the quartet of Crested Larks.


Once down in the riverbed, in the small puddles I found a trio of Ringed Plover, another Grey Wagtail and a distant pair of Meadow Pipits.  Then it was time to head back home but not before taking a steep track upwards to get closer to the flock of Spotless Starlings including a dozen or so Common Starlings.


Check out the accompanying website at http://www.birdingaxarquia.weebly.com for the latest sightings, photographs and additional information
Posted by Bob Wright - The Axarquia Birder at 07:04