The present forecast is all about percentage chance for rain and yesterday we hardly had more than a five-minute spit!  So, given that Jenny would be out most of tomorrow, I took myself off for two days birding in Almeria province.  Leaving home at 9.45 it was mostly cloudy with the Sun contemplating whether or not to puts its hat on and come out play as I made my eastwards through the Axarquia and then Granada province on the A7 Mediterranean motorway. Literally, as I entered Almeria province a few spots on the windscreen and arriving in Las Norias, home of the plastic re-cycling plant, loads of plastic greenhouses and generally filthy conditions with all the discarded rubbish, a light drizzle started.  However, it was less than fifteen minutes and by and large the day remained cloudy and dry if somewhat murky.  Indeed, as I arrived in Cabo de Gata at about 4pm the cloud was breaking exposing some blue sky and even a little watery sunshine.


Leaving the motorway I quickly recorded both Rock and Collared Doves on the wires along with a few Spotless Starlings and a small number of House Sparrows.  The small green patch on the left with the big puddle as you enter the village held its usual supply of Cattle Egrets, twelve on this occasion, along with a couple of Glossy Ibis. Taking the first crossing of the water I was greeted by scores of feeding Crag Martins, a number of Cormorants and little else.  I did record a Little Grebe, Heron and couple of Moorhens along with a few Black-headed Gulls before continuing on and through the plastic greenhouses to the meadow at the end of the road down from the plastic re-cycling facility.  A few White Wagtails on the way and when I arrived but my word what a difference.  This road has been widened, edges given support, re-surfaced and lined so, in theory, nowhere to stop and park up if more than a single car.  Even the usual parking spot near the bridge seems to have been halved.  On the water itself eight Red-crested Pochard, a few Mallard and a dozen Coot along with more Cormorants.  A second Heron was found in the dense reeds opposite.  At the factory end four Little Egret and a single Great Crested Grebe whilst on the opposite side of the road I was able to watch a feeding Purple Swamphen from the bridge. Not only a good number of feeding Crag Martins but also a single Barn Swallow,  Just as I was about to leave I found the single Great Crested Grebe and, of course, a good many Chiffchaff.


Off to Roquetas de Mar, and found a very cheap place to fill up with fuel near San Agustin, with the first stop at the lighthouse track where I noted many Flamingo, another Purple Swamphen and a few Yellow-legged Gulls plus a distant single Slender-billed Gull.  Approaching the site I passed a massive flock of about 300 Spotless Starling, more Collared Dove along with both White Wagtail and the first of many Stonechat sightings.  The pool at the back held a number of Shoveler, a quartet of Gadwall as well as Coots.


Working my way back to take a look at the “secret Pool” further on I found very little apart from the flooded track.  The return drive to the road produced Crested Lark, Kestrel and Serin. The preening Hoopoe was a welcome sighting.

And so to Roquetas itself, noting the large flock of over thirty Common Starlings, where the fresh water pool was full of Coot and mainly Black-headed Gulls but very few duck, just a handful of Mallard and a couple of Red-crested Pochard.  Nothing other than Mallards on the “feeding pond” and very little on the track down into the salinas.


Lots of Flamingos, Shoveler and Coot but eventually a pool that turned up both single Redshank and Greenshank and the next produced a half-dozen Black-winged Stilts.  Just before my turning point I found three Crested Larks and on the water side a whole raft of Lesser Black-backed Gulls but closer inspection with the scope also found the four Audouin’s Gulls.

Working my way back to the road I recorded a Great White Egret and then stopped to check out the strange “lumps” to my right to discover about thirty resting Golden Plover.  The final species was a pair of Blackbirds as I entered the town itself. 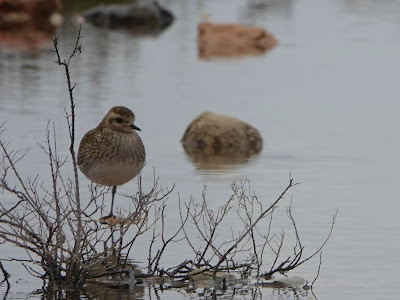 A different route to Cabo de Gata on this occasion as I took the road from Retemar straight down to the front and then worked my way along the beach track before joining the country road to my destination.  Hardly onto the track when I found ten Sanderling feeding on a small pool on the sea side of the track which was quickly followed by both Greenfinch and more Stonechats.  Lots of Greenfinches in this area plus more Chiffchaff and a single Dartford Warbler followed by a male Sardinian Warbler as I made my way back to the main road along with a pair of Magpie.


Entering Cabo de Gata I stopped at the first hide on the bend and noted more Flamingos along with Stonechat and a second Iberian Grey Shrike just in front of the hide. Also present one Greenshank and a couple of Slender-billed Gulls. A single Black Redstart and more Greenfinches as I made my way down to the Public Hide from where I noted, to my right, the raft of Lesser Black-backed Gulls which included a quartet of Sandwich Terns, many more Flamingos and a dozen Shelduck.  To the left, in addition to the gulls and another Great White Egret, I found the score or more of Spoonbills resting with the Cormorants.

The very wet and puddled track away from the hide running parallel to the road produced yet more Greenfinches along with Crested Larks and a small number of Meadow Pipits along with at least one Tree Pipit.  A very quick trip up to the lighthouse and back before checking in at the hostal also found more Crested Larks and House Sparrows along with a couple of Black Wheatear.

Check out the accompanying website at http://www.birdingaxarquia.weebly.com for the latest sightings, photographs and additional information
Posted by Bob Wright - The Axarquia Birder at 23:04