Arriving just after 9am  at the mouth of the Guadalhorce in Malaga for the monthly meeting of the Axarquia Bird Group the weather was bright and sunny with clear blue skies, yet a very cold chill in the air and definitely well worth putting on the thick jumper.  By midday the temperature was up in 15 - 17C range and I was trying to keep cool!  Arriving early with visiting Dutch birder, Lisette we went straight to the mouth of the river where we found a very calm sea and no birds.  Lots of House Sparrows and a few Serins in the surrounding vegetation on the banks and even a couple of Sandwich Terns put in an appearance as we were about to depart.  A Cormorant flue up river and, in addition to the Spotless Starlings on the roofs of the apartments, Lisette heard a Greenfinch as we were getting into the car.

Arriving at our meeting point on the track leading up to the river opposite the football ground, visiting Swedish birder, Goran Storensten, who was to accompany us to the first hide, was already on site and shorty joined by Jerry and Barabra Laycock from Fuengirola and Marcus and Liz Roots from Competa.  With many Monk Parakeets atop the fence on the other side of the road and a visiting Blackbird we set of towards the footbridge recording both Cetti's Warbler and Robin.  A Lesser Black-backed Gull flew overhead and from the footbridge we picked up both a couple of Rock Doves under the motorway bridge and also saw a couple of Collared Doves.


So onto the Laguna Casillas where there was a small party of Shoveler along with about ten Pochard.  Just the single Moorhen and Little Grebe and a few more Coot. No Booted Eagle resting on the old tree to our right on this occasion but right on cue an individual flew over and lost itself from view in the vegetation at the back.


On the Wader Hide where we found eight Black-winged Stilts and a couple of Moorhen at the back of the water.  Also to the back right no less that six Little Grebe and then a Common Sandpiper dropped in.  Meanwhile, further searching found a second Booted Eagle resting in a dead tree at the back whilst behind us we had the constant accompaniment of a calling Red-legged Partridge.  Marcus found a distant Hoopoe and there was also a number of Chiffchaff to be seen.


Moving on towards the sea watch we stopped to check-out the Rio Viejo (Old Rover) where we found more Black-winged Stilts, a couple of Ringed Plover and at east ten Sanderling.  A single Redshank and a couple of Greenshank plus a small party of Dunlin improved the wader total and then the first of a few Black Redstarts on either side of the track.  Scoping the back of the rough ground to our left we found a trio of Crested Larks and a couple of Meadow Pipits.  A Blackcap put in a very brief appearance and a (true) pair of Sardinian Warblers dashed across the track.  Similarly, there was no shortage of Stonechat sightings.  Nothing to see from the Sea Watch and so we made our way back picking up another couple of Kestrels and a trio of Linnets that alighted on the side of the track for a few seconds.  At about this point, with the weather getting decidedly warmer, the Crag Martins started to appear and their number actually included a single Barn Swallow.


Approaching the Laguna Escondida we were in time to see the departing Cattle Egret and then found a good assortment of birds on the water including Coot and Moorhen plus a couple of Little and two Black-necked Grebes, plus ducks including eight Pochard, a pair of Mallard, half-dozen Shoveler and (now) two male White-headed Ducks.  Both Chiffchaff and White Wagtails were busy feeding in front of us and to our left my first Zitting Cisticola of the morning. 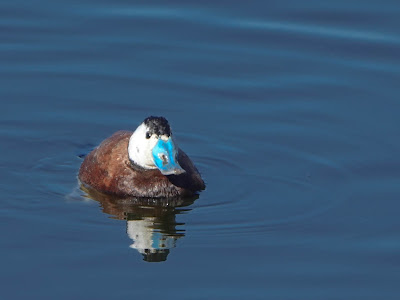 All now in a happy frame of mind as we made our way to our final stop at the main hide overlooking the Laguna Grande.  After being welcomed by a passing Booted Eagle we could not but notice at least thirty Cormorants and a good half-doze Heron.  To the back of the water, in addition to a number of Shoveler there was a small group of Seven Black-necked Grebes and a few Moorhen and Coot were also notes.  A number of Collared Doves and Spotted Starlings in the trees to our left and in front the remaining three of the five juvenile Flamingos, two resting with the above Cormorants.


Immediately in front of us on the scrape, in addition to the few Black-winged Stilts we had a Common Sandpiper and another Greenshank.  A Redshank worked its way along the edges as did a couple of Ringed Plovers and a quartet of Sanderling.  Cetti's Warblers were calling and then Marcus found the resting Marsh Harrier in a tree at the back of the laguna.


I noticed the small "lump" behind a high branch on a nearby dead tree and on closer inspection with the scope discovered a Peregrine Falcon enjoying its midday meal as it heatedly plucked away at a large bird, presumably one of the local Collared Doves. 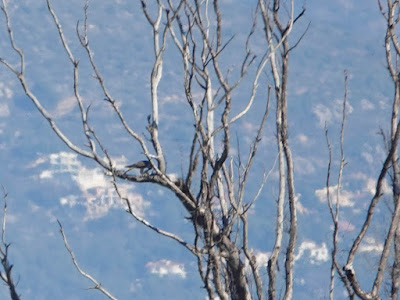 And to round off a perfect morning just as we were leaving Lisette was pleased to be shown the Osprey that chose that moment to do an over-pass.  In addition, our hearing specialist, Lisette also heard Short-toed Treecreeper and Dunnock during the morning.  Great birds, great company and great weather.

When all the schoolkids arrive the Flamingo will leave! 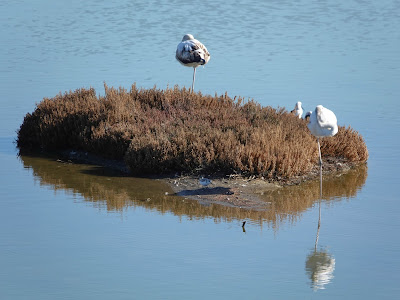 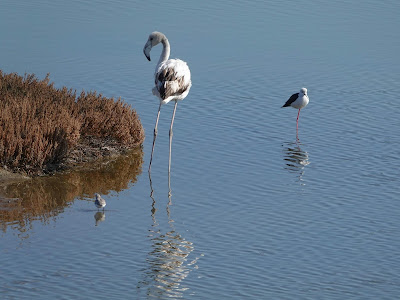 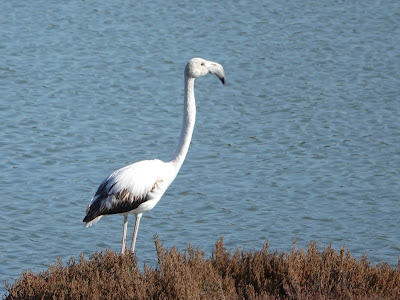 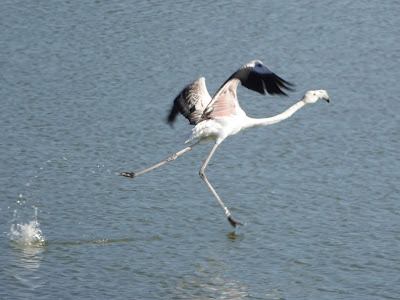 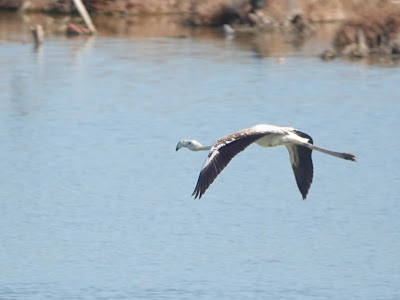 Check out the accompanying website at http://www.birdingaxarquia.weebly.com for the latest sightings, photographs and additional information
Posted by Bob Wright - The Axarquia Birder at 09:47