Arriving at Laguna Dulce about 9.15 this morning it was calm but cloudy and dull with a hint of rain in the air.  Intermittent short drizzles followed soon after and by late-morning it was more of a continuous light rain.  Rubbish weather for photographs as will be seen below with many taken from within the car as record shots.

Approaching the laguna I had a Buzzard on top of pole and then five Crane in a field to the left and close to the road and lots of birds to be seen on the water with a roosting gull flock made up of Black-headed and Lesser Black-backed Gulls totalling well in excess of 500.  Similarly, still over an hundred White-headed Ducks to be seen and almost as many Shovelers.  Mallards were well represented and probably a score of Red-crested Pochard.  Nearer to the hide a handful of Gadwall.  Also present many Little and a few Black-necked Grebes.  A number of White wagtails were foraging the shore to my left, but no Jack Snipe on this visit, and to my right a sudden movement caught my eye and I was in time to see a couple of Song Thrush.  Both Collared Doves and Chaffinches in the trees near the lay-by and even a couple of Snipe were hiding in the road-side verge and took off to the laguna as soon as the car approached.  Also on the water  a very large flock of Coot at the back and maybe as many as thirty Flamingo away to the far right. A quartering Marsh Harrier over the back of the water resulted in the expected rush to take to the air.


Leaving the hide to drive round to the back of the laguna before the rains arrived I found another Buzzard resting on the wooden shed on the right just before the Ronda turn.  Entering the track to the fields I was welcomed by over a score of House Sparrows and in the very first field on my left nine feeding Golden Plover.  What a shame it was so dull that the photographs could not do justice to this lovely wader. 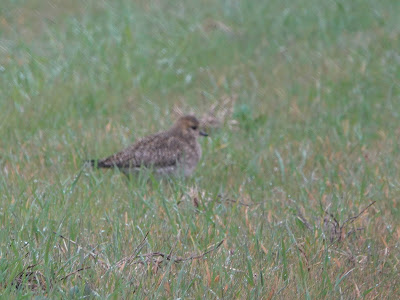 Continuing on I cam across a very flighty flock of over an hundred Calandra Lark followed by Stonechat, Crested Lark and Meadow Pipit.  I took the chance to follow the track to its end, well almost, and as on the last visit that dip with its water and mid filled base was too much to contemplate without at least a four-wheel drive vehicle.  Just a hundred metres away I could see the road to Fuente and the big farm, with a good number of Rock Doves and Spotted Starlings laughing their heads off as I turned and retraced my drive!  The return drive produced Goldfinch and Linnet and a quick call back to the lay-by then produced both Blackbird and a Hoopoe.

Making my round to the car park at Fuente de Piedra in a clockwise direction I had a very large flock of Feral Pigeons at the large farm and a similar number of Spotless Starlings resting on the wires leading into the olive grove.  This was quickly followed by another Buzzard atop a pylon and then a couple of Wood Pigeons.  Approaching the Visitors Centre the area on the left was dry but a single Lapwing at the back.  With a light drizzle falling and very limited time before moving off to the Camping Bar for the annual meeting of the Andalucia Bird Society in forty-five minutes, it was straight round the back to the laguneta.  The main salina, now basically dry with a damp gleam, held hundreds of distant resting gulls and to the left maybe up to 400 Flamingo.


Once at the laguneta a dozen or more Flamingos accompanied by a good variety of duck including many Shoveler, Mallard, Common Pochard, a couple of White-headed Duck and a similar number of Teal. A quartet of Little Grebe and many Moorhen and Coot were also recorded.  Most of the gulls were resident Black-headed but there were also a few Lesser Black-backed Gulls.  Away from the water in the surrounding vegetation I found a number of Chiffchaff, Spanish and House Sparrows, Blackcap, Blackbird, Great Tit and a few Greenfinch.  I also added Jackdaws which, on this occasion, seemed to have preferred the town itself rather than the reserve.


Following the ABS meeting I made a fleeting return visit to the Visitors Centre but was unable to locate the Redwing seen earlier in the day so back to Laguna Dulce for a final visit before heading off home via Ardales and Malaga.  The country road away from Fuente produced a small number of Serin and Goldfinches, another couple of Kestrel and then a single Red-legged partridge standing in the road and waiting to be ht by a passing car!  On arrival at Laguna Dulce I was able to add a single Bluethroat and the scores of Crag Martins that had turned up to feed now that the temperature had risen and the weather much improved.


A short stop at the Penarrubia duly produced a couple of Griffon Vulture using the thermals to drift along the cliff face and then on towards Malaga where I decided to stop a the Rio Grande just in case
there were any wintering Siskin.  My drive downstream alongside the small private airstrip produced White Wagtails and Chaffinch and then, at the confluence of the Rio Grande and Guadalorce, a preening Common Sandpiper.  Driving back and then upstream before crossing the river and stopping at the small bridge produced a quintet of Black-winged Stilt and a few mallards along with a lone Little Egret.  Whilst at the bridge I watched a couple of Cormorants and then a Great White Egret took off from below me and settle further down stream.  By the time I returned to Mezquitilla I had recorded well over 50 species for the day which was most pleasing especially giving the dullness, cloud and wet weather.

Check out the accompanying website at http://www.birdingaxarquia.weebly.com for the latest sightings, photographs and additional information
Posted by Bob Wright - The Axarquia Birder at 03:12