A most enjoyable day's birding in the Osuna area which eventually produced all my target birds.  Leavng home before 7 to meet up with friends at the venta at the exit to junction80 on the A92 at Osuna it was clear, sunny and bloomin' cold.  It might have been 10C when I left the coast but rising to the top of the hill out of Malaga the temperature had dropped to -2C and settled for the morning between 4 and 8 before rising to 12 after lunch.  Approaching the meeting point I had already seen a couple of Buzzards and House Sparrow and White Wagtail were foraging in the car park area.

Eventually, along with thirteen special friends in a total of five cars we set off along the back lane and made straight to the viaduct over the abandoned high speed rail track-bed.   On the way we recorded Spotless Starling, Corn Bunting and more White Wagtails before the numerous number of Stonechats.  Also seen was a large flock of Red-legged Partridge and a number of Buzzards.  We even had the sighting of a departing Northern Wheatear showing its conspicuous white rump.  Even closer, a rather lovely Iberian Grey Shrike.  As we approached the viaduct very many small mixed flock of House and Spanish Sparrows along with more and more sightings of Ravens.

Surprised to actually see some water below the viaduct albeit mainly narrow streams and the occasional wet patch we soon found dozens of Rock Doves (Feral Pigeons) on the viaduct itself and a large flock of Lapwing below.  Having found the first of a couple of Green Sandpipers we were then show about eight Snipe immediately below and Derek was first to find the flock of about 50 Golden Plover and a handful of Ringed Plovers at the back of the wet area.  However, apart from the isolated individuals there were over sixty White Storks feeding alongside the horses to our distant left.


Not really any warmer as we made our way back to one of the high over-bridges passing a close Iberian Grey Shrike on the way to take the farming road out into the steppes in search of the local Great Bustards.  Derek in the lead stopped to say that he could see a few distant Great Bustards and by the time we had all disembarked and concentrated we finally added our small groups together and reached an estimated flock size of about 55.  Great.  Then a small raptor on a rock that moved to a low bush at the side of the track.  At the same time a Kestrel took up station on a nearby rock but I think most of us were right in calculating that the original small raptor was indeed a Merlin.  Whilst in the area we recorded Linnet, Crested Lark, Red Kite and Calandra Lark and as we continued to study the big birds a small number of Lesser black-backed Gulls flew over.


Steve then took our car along a narrow, deep-rutted track to try and get a closer view of the Great Bustards as they had moved away right to land in front of a distant white building.  Whilst watching the feeding flock, we were amazed to see a another large flock fly in from the left and pass immediately overhead the feeding group.  Counting the split as 25 and 35 it would appear that we had about 120 Great Bustards in sight at the same time.  It appeared that a handful were actually feeding very close to a nearby farm building so we took a circuitous route to the area but, alas, the group were just as far away and now with the sun in our faces.

We , therefore, drove back to the main road and carried on the next turn which took us over the third high bridge towards La Lantejuela.  Stopping on the bridge we had a flock of 16 Stone Curlews fly immediately in front of the car and then a quintet of larger birds.  A pair of Ravens and both a Buzzard and Marsh Harrier also moved away to our right whereas a close Buzzard headed off left in front of Steve.


Our next call was a visit to the old ruined farm at the end of a long track where the Rollers and Lesser Kestrel breed.  These had not yet arrived from their winter quarters and all we added were Chiffchaffs and more Crested Larks.  But we did stop to watch a few Linnets and Serin and Steve spotted the single Brambling which came to rest in the top of a nearby olive tree.  Whilst the rest of the group remained with the Great Bustards to take more photographs and also found a good-sized mixed finch flock including a number of very flighty Bramblings,we headed off to nearby La Lantejuela for a comfort break and warning coffee passing a large group of Spotless Starlings on the way which also included a good number of Common Starlings along with more Calandra Larks before joining the main road to the village.


Suitably refreshed,our next stop was at he small reserve on the outskirts of the village based on the local grey-water treatment plant.  As usual the site was closed but the warden was exiting with a small group of Maltese birders and let us join them a the hide overlooking the main pool.  Lots of birds to be see,  Apart from the seventy plus Flamingo we had a variety of duck species including Mallard, Shoveler, Pochard, many White-headed Duck and a pair of Ferruginous Duck.  Both Little and Black-necked Grebes clearly on show and a number of Coot.

There were smaller birds to be seen around the edges including many Chiffchaff and House Sparrows but we also saw House Sparrows and on the left bank a feeding Spotted Flycatcher, another early sighting following last week's bird a the Charca de Suarez, Motril.  Steve and Elena were first to find the Black-winged Stilt on the far side and a walk along the road to check-out the bushes produced a male Sardinian Warbler.

All joined together for a final drink on the outskirts of the village before making our respective journeys home and for we three the straight seven kilometre road back to Osuna produced no less than seven Buzzards on the pylons along with a suddenly arriving Black-winged Kite.  Just when we thought we had recorded the last species of the day we happened to check out the resting bird on the next length of wire and discovered a Wood Pigeon rather than another Collared Dove, so giving a final tally of 51 species for the day. 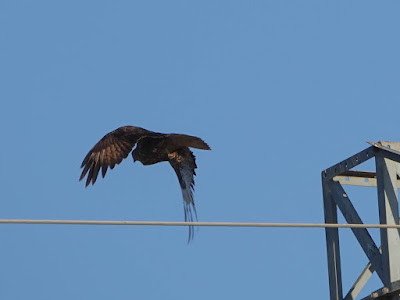