A wonderful three hours at the Charca de Suarez, Motril this morning with visiting birding friend Hans Borjesson from Sweden, on his last day before flying back to Sweden in the morning.  A great start when we picked up scores of Common Waxbill at the far end of "Turtle Dove Alley" before driving round the corner to the Charca entrance where we were met by both Black Redstart and White Wagtail.  By the time we left we had recorded 44 species and then added two more as we worked our way back down Turtle Dove Alley and on towards the old N340.

A good start a the Laguna del Taraje where we found many Mallards along with a pair of Shoveler, a couple of Little Grebes and at least four Red-knobbed Coots plus a few Moorhens.  To our left both Blackcap and Robin and then calling Cetti's Warblers, Chiffchaff and Great Tit.  Above us many of the Crag Martins that we were to encounter during our visit.


A Teal was recorded from the hide at the far end along with more Chiffchaffs and then on to the Laguna del Alamo Blanco.  What a surprise!


Lots of water but no birds.  However, ever patient, I eventually found a Snipe on the far side at the edge of the reeds, Hans heard a Water Rail and then the bird put in a very brief appearance at the very back before both Sardinian Warbler and House Sparrow made brief appearances.  Both Serin and Kestrel were found concealed in a tree at the back and a distant Grey Heron was seen afar.


Waking to the main hide overlooking the Laguna de las Anas in now bright sunshine we added Wren, Reed Bunting, Goldfinch and a Chaffinch.  Once inside we quickly became aware of the good number of both Common and Red-knobbed Coots along with a plentiful supply of both Mallard and Shoveler.  Towards the back we added both Gadwall and Pochard and, of course, plenty of Moorhens and a few Moorhens to be seen.  On the island in front of us a single Grey Heron and a couple of Yellow-legged Gulls plus a number of Cormorant and around us a few White wagtails, a Stonechat, plentiful supply of Chifchaff and a few Little Grebe.  At the very back of the water we also found our first, two, Purple Swamphens of the morning.  Above the water, yet more feeding Crag Martins.


Our next stop was at the northern hide overlooking the Laguna del Trebol where, again, many Red-knobbed Coots and Mallards plus additional Common Coots and Mallards and another couple of Purple Swamphens.  However, we immediately became aware of the many very close Chiffchaffs feeding on the dry, decaying recovered weed to the right of the hide.  Before long, as hoped, these charming little birds were joined by both a Grey Wagtail and a Bluethroat and giving excellent views.


So on round the track to the southern hide where we also came across a second Reed Bunting of the morning and the first Black-headed Gulls.  However, the high point was probably the five Mediterranean Chameleon Chamaeleo chamaeleon that we were shown on both sides of the entrance track including one very young specimen barely five centimetres long and still jet black.  Evidently, we were informed, these animals tend to be black until they have soaked up sufficient sunshine and warmth to take on the ability to change colour to suit their respective backgrounds. 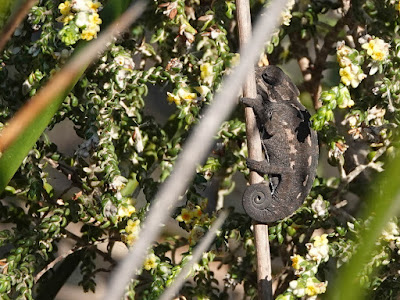 With time running out we entered the final hide on our clockwise circular tour overlooking the Laguna del Lirio.  Shoveler, Red-knobbed Coot and Moorhen along with more Chiffchaffs when Hans found the trio of Ferruginous Ducks.  If that was not exciting enough he was then first to spot the stranger in our midst.  A very, very early Spotted Flycatcher showing well as it carried out its hunting role in typical fashion.


So time to return home and as we drove back down Turtle Dove Alley we stopped as we found a small number of Common Waxbills and then a Marsh Harrier.  A Kestrel was resting on the wire at the top end of the road and at the far end we also added Spotless Starling before our final sighting, a pair of Cattle Egrets flying away to our right.  All in all, a very enjoyable morning in good birding weather and the excellent company of Hans.


* Digiscoped; use of phone camera with telescope


Check out the accompanying website at http://www.birdingaxarquia.weebly.com for the latest sightings, photographs and additional information
Posted by Bob Wright - The Axarquia Birder at 12:48