As hinted at last week, Dave and his Arboleas Birding Group are back out with a vengeance and seem to have had a fabulous day at Cabo de Gata.  What a great way to start the new year with over 50 species recorded.

For our first official trip of the new decade I decided we'd go to Cabo de Gata and the Rambla Morales.  I picked up " grumpy" (her word) Carolyn (she's not an early morning person!) from the Overa hotel and then Iain from Los Gallardos.  As I drove down south the clear skies began to cloud over, but it later became blue and sunny.  We'd listed Collared Dove, White Wagtail and Blackbird by the time we arrived (early) at the cafe at Pujaire.  We were on our second coffee when the others began to arrive.  In no particular order:- John, Les, Alan, Trevor, Val, Mike, Diane, Richard, Alec and Peter.  Les and co had seen Hoopoe and an Iberian Grey Shrike.

We made our way to the first hide.  Apart from the usual Greater Flamingos there didn't appear to be much there, but a scan produced a Little Egret, spotted by Carolyn.  A Greenfinch and Kestrel had been seen by Les.  Some Mallard flew from behind us.  On the shallow pond on the opposite side of the road,I saw a number of Chiffchaff.  A Lesser Black-backed Gull flew south.  Carolyn was first to spot an approaching female Marsh Harrier.  She also found a Green Sandpiper.  Alan found two distant Grey Plover.  A Bluethroat perched briefly on the stone wall before dropping down with another out of sight.  A small number of Crag Martins flew passed.  Richard was quick to spot the fast Snipe.

Les and I simultaneously spotted a distant bird of prey.  We concluded it was a Common Buzzard.  Alan found two Black-winged Stilt and a Redshank in a shallow dyke to our left with a Stonechat on a fence.  John wandered down the road a bit and reported a Black Redstart.  Alan observed a line of Shelduck and three flying Eurasian Curlew over the savanna.  A noisy Sardinian Warbler was eventually seen.  An Iberian Grey Shrike was on the power line.
We convoyed round to the second hide.  There was nowt out to sea.  As we approached the hide two flights of Stone Curlew flew right to left.  There must have been at least 35 birds in total.  There, Spoonbill could be seen far to our right on their usual causeway.  A Bluethroat gave us short views whilst a pair of Stonechat showed well.  We also had Slender-billed, Black-headed, Lesser Black-back and Yellow-legged Gulls, but in small numbers.  When we got back to the cars, Carolyn spotted some Gannet out to sea.

I lead the group to the public hide.  Here I spotted a small raft of Shoveler duck.  "Eyes of a hawk" Richard found a very distant Black-necked and a Great Crested Grebe.  I realised that John, Alan and Les were AWOL.  En route we'd checked the past location of the Dotterel without a result.  When the fugitives arrived, they said they'd found 8 Dotterel on the opposite side of the road.  Les had wandered down to the shore line and had seen Sandwich Tern, Sanderling and Turnstone.  John also had an Audouin's Gull.  We exited via the church track.  A Meadow Pipit, a Thekla Lark and a Dartford Warbler was seen. As we passed through the village, us out in front found two Trumpeter Finches perched on a chain link fence. 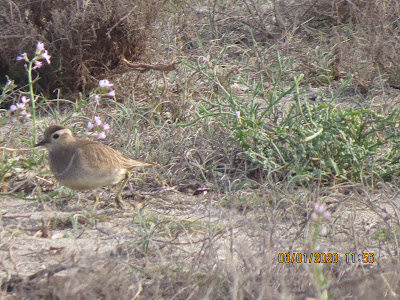 We headed for the lighthouse but didn't see anything new.  As we were travelling back over the pass, both Carolyn and I spotted a large raptor just popping over the high ridge never to be seen again!  We didn't see the Dotterel again, but Alan and co did find some Trumpeter Finch on the way back.
Using the beachside track we made our way towards the Rambla Morales, seeing Meadow Pipit, Black Redstart and Stonechat on the way.  John also had Skylark.  At the lake we only found some Moorhen, a couple of Coot and a solitary Purple Swamphen.  Alec found a Little Ringed Plover and Alan's Robin concluding the day's list.

We ended up with 53 species.  A good day's birding in good company.  Mike and co left early as he wasn't feeling well.  Hope you're feeling better, Mike.  Best wishes also to Kevin, who sustained a knee injury a few days ago.

Check out the accompanying website at http://www.birdingaxarquia.weebly.com for the latest sightings, photographs and additional information
Posted by Bob Wright - The Axarquia Birder at 11:33