I was obviously not the only one out birding today as an sooner had I start this report than I received the latest update from my friend Dave Ellott-Binns outlining his latest adventure with the Arboleas Bird Group.

The cat's away (live-in caring) so the mouse went out to play early this morning!  I left Arboleas at 6.30am and headed down to the Rio Andarax estuary, just east of Almeria.  I got there at around 7.50am, just after sunrise and parked up.  I did not have to wait long before I spotted a shrike a top a service building some 100 metres away.  I drove to within 20 metres to confirm it was the Steppe Grey Shrike. It showed well and was very vocal.  Having got some reasonably good photos I headed back towards Cabo de Gata. 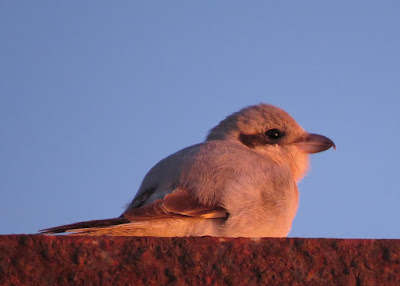 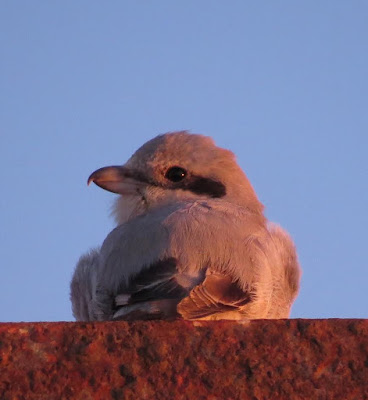 I was having a revitalizing coffee in the Pujaire cafe when Trevor & Ann arrived, followed by Alan and Les.  After they had had their coffees we made our way to the first hide.  The water level was still high.  A pair of Mallard was on the pool on the opposite side of the road.  In the main expanse of water there was the usual large numbers of Greater Flamingo.  Other species were present but not in large numbers.  I found a Redshank which was accompanied by a Spotted Redshank.  Les found some Dunlin.  There were Avocet, 19 Black Tailed Godwits and a small number of Slender Billed Gulls.  I spotted a Grey Heron on a far pool behind us.  Two Little Egret were also there.  Alan saw a flying Eurasian Curlew which landed in the water to our right.

We then made our way to the second hide, me seeing a female Black Redstart on the way and Alan and Les seeing a Stonechat. The wind was coming from the east and was quite strong. Far out to sea a fishing vessel was surrounded by unidentified gulls, but we did ID some roving Gannets.The hide was full of school children on an outing so we carried on to the public hide.

From the hide I logged Sanderling and Black Headed Gull. Les & Alan added Shelduck and Black Winged Stilt on the right hand salina.  The rocky causeway was occupied by Lesser Black Backed Gulls. Alan pointed out the 23 Spoonbill sheltering on the causeway in the left hand salina which I'd somehow missed from the hide!  As we walked by towards the vehicles, I spotted an Audouin's Gull flying over. Due to the wind the smaller birds were keeping a low profile, but we had a short flurry of action as a Dartford and Sardinian Warbler plus a Chiffchaff all showed themselves in the same large shrub.  A couple of Greenfinch flew over.  As we left I saw a Kestrel.

Returning to the now vacant second hide, I spotted a Great White Egret.  We searched for any Stone Curlew sunbathing on the savannah.  Alan and I both found one at the same time.  A flock of small birds was seen by Les.  They landed out of view but luckily a few showed themselves to be Linnet.
We then drove to Cabo village to do a sea-watch whist having refreshments.  There was no wind on that side of the cafe. A  sub adult Gannet flew passed.  The first and only Sandwich Tern was fishing close to shore.  Alan then managed to find a Razorbill.

Trevor &and Ann then headed to Almeria for some retail therapy whilst Les, Alan and I drove along the beach-side track to Rambla Morales.  The good news was that the breach in the sand bar had re-sealed itself , so there was water in the pool. The bad news there were virtually no birds!  We struggled to find the three Moorhen.  As we were leaving three Lesser Black Backs flew in.
All in all it was a good days birding in good company.  40 species.  Could have done without the wind though!  No chance of any photography at Cabo de Gata or Morales.
Regards, Dave

Check out the accompanying website at http://www.birdingaxarquia.weebly.com for the latest sightings, photographs and additional information.
Posted by Bob Wright - The Axarquia Birder at 12:28