Finally time to complete the trip reports for last week-end's visit to Extremadura.  Having spent a most enjoyable evening at the Hotel Rural Hojaranzos in Tejeda de Tietar I said good-bye to friends and headed off to the Monfargue National Park entering, for the first time, from the east so that I could ext and start my return journey to Mezquitilla by joining the motorway at Trujillo.  With the hotel right on the border of the park, I soon picked up Spotless Starling and an early rising Red Kite before entering the narrow road down to the river Tietar and its well-known cliff face on the opposite bank where I hoped to see some magnificent birds.  Continuing along the lane I soon added both Collared Dove and Wood Pigeon quickly followed by Stonechat and Corn Bunting.  A White Stork drifted over the adjacent dehesa and a Great Tit popped off the fence before rounding the last bend to meet up with the river.

Managing to find just enough space to get the car off the road in front on an already parked car, I was in time to see a Great White Egret slowly flying up stream.  Then round the bend immediately in front of me, I cam across a birder sat on a low camping stool with hos telescope facing the cliff on the opposite bank.  Enquiring about any possible sightings of the local eagle owl i was told that he was watching the nest of a Spanish Imperial Eagle and in addition to its mate he had been listening to a third individual calling from behind.  I very quickly discovered that we actually new each other and Robert was another ABS member who just happened to be here on a birding holiday from Germany; small world.

Having been shown the eagle's nest i son had my scope set up and was able to get a good view of the female's head.  The female was then joined by the male Spanish Imperial Eagle who, after a few circuits, settle on its favourite, nearby perch and  ten minutes later was joined by the female.  Copulation took place and eventually the female returned to the nest and the male set of on another short circuit of its nearby territory before re-settling in the tree.  Marvellous views. 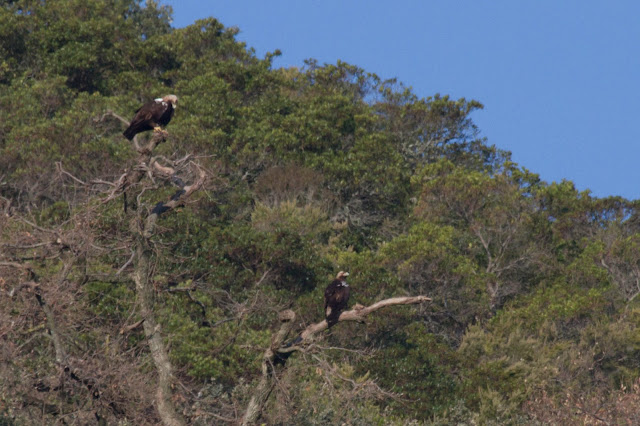 Behind me a noisy Jay was foraging in the small trees whilst back on the cliff a mixture of resting and early morning flights by the resident Griffon Vultures.  Crag Martins patrolled the cliff face and I made my way along to the next view pint where I was able to park the car and, as an additional bonus, had the pleasure of watching my first Black Stork of the year in the air above me.

Climbing up the first hill to the mirador overlook the bend in the river I had a Heron on the far bank and both Black and Griffon Vultures in the air above me. 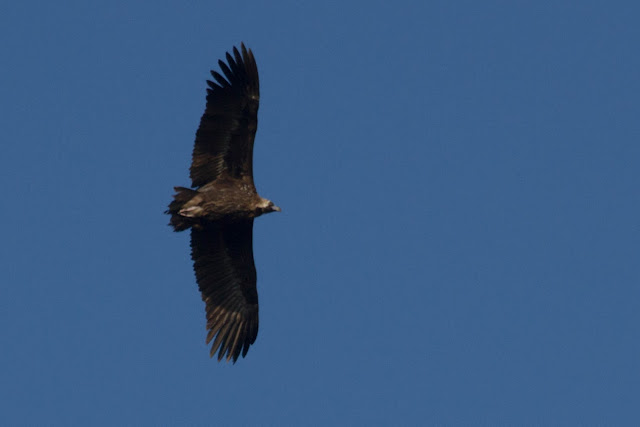 From here I drove on to the dam where I found scores of House Martins and a number of Azure-winged Magpies in the trees below the picnic area.  No house Martins  or anything else as I crossed the long bridge other than some resident Rock Doves.  But parked on the far side I did find a number of Chaffinches, Blackbird and Robin with, finally, a handful of feeding Long-tailed Tits.

Approaching the mirador at El Salto del Gitano opposite the Pena Falcon I had a single Rock Bunting in a tree and then the first sight of the numerous Griffon Vultures and feeding Crag Martins.  Most of the former were still resting and it appeared to me that there were far fewer than on previous visits.  Below me a male Blue Rock Thrush came to rest on top of a large boulder.

As I made my way to Trujillo and the motorway I also picked up Magpie and then White Wagtail, Crested Lark, Mallard and Kestrel at the Almonte river crossing.  But there was still time when I reached Castuera to take a diversion up and over the steppe covered yesterday morning and eventually exit at Cabeza de Buey.  This journey along some different, and smaller, tracks produced Hoopoe, Magpie, Meadow Pipit and Iberian Grey Shrikes, not to mention the occasional Marsh Harrier and a flight of a dozen Black-bellied Sandgrouse.  Naturally, there were both Golden Plover and Lapwing to be seen.  However, nearing the end I had a flock in excess of fifty Choughs feeding on the land to my right.


It was now full speed ahead for Cordoba and the motorway to Malaga and home.  But, again, time for a short detour south of Cordoba to visit, after seeing my first Buzzard back in Andalucia, the largest of the Cordoba lakes, Laguna de Zonars, just south of Aguilar.  However, on arrival the entrance track through the olive grove was definitely fit for only 4 x 4s so I had to park above the lake and use my scope.  Not a lot about but I did manage both Common and Red-crested Pochard along with Mallard, Great Crested Grebe, Coot and Barn Swallows over the water.  I thought that that was it for the day as evening drew nearer but then, to my great surprise and pleasure, a single Black Kite, again my first of the year) crossed the road above me to the front.  What a way to end my tour with almost 100 species recorded and including 16 new species for the year.


Check out the accompanying website at http://www.birdingaxarquia.weebly.com for the latest sightings, photographs and additional information.
Posted by Bob Wright - The Axarquia Birder at 02:40