Two nights in Fuengirola with jenny to enjoy a sea-front hotel and some evening dancing but what better way to spend an hour or so checking the local light-house (faro) in search of that elusive, single Purple Sandpiper that has decided that this small stretch of rocky coastline is its favoured winter holiday destination.

So it was that on Friday afternoon, having spent the morning with our dance group then visited the first of two shops that we wanted to access we duly arrived at the parking space below the light-house so that we could walk the path to the open sea watch hide.  White Wagtails to greet us and already recorded both Collared Doves and Blackbirds we had our first view of a nearby Black-headed Gulls.  Just before reaching the hide movement below us on the beach drew our attention to the first Turnstone of the day and the, feeding alongside, both Ringed and Kentish Plovers.  A single Little Egret flew in to feed whilst, out a sea, good numbers pf both Yellow-legged and Lesser Black-backed Gulls. 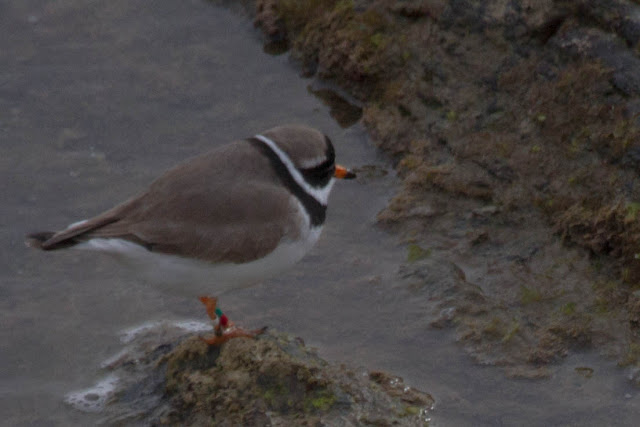 On to the hide only to discover that a couple of anglers were fishing at the best site for seeing the Purple Sandpiper but more Turnstones and a half-score of Sanderling.  A Cormorant was sunning itself on an exposed rock.  Nothing for it but to make our way back to the car noticing more Sanderling and Turnstones in small numbers. Then, almost back to the end of a path, a single bird posed on the top of a large rock with a Turnstone doing its usual wandering, pecking walk.  It remained long enough to get the scope on it and confirm that I had found our missing Purple Sandpiper before both birds took off westwards. However, not fifty metres further on a lone Whimbrel was happily feeding so more photographic opportunities.

Returning to our hotel overlooking the beach we now had scores of resting gulls, mainly Lesser Black-backed and Yellow-legged but also a small number of Black-headed Gulls.  Meanwhile, all around us, scores of feeding Crag Martins picking insects from the air as they manoeuvred around the steep faces of the neighbouring hotels but not a single House Martin - yet.

Not happy with the very brief and difficult view of the Purple sandpiper we decided it would be worth taking a second look as we returned to Calahonda the next morning to re-visit the shop that was closed yesterday.  Almost dressed and a phone call from my friend Derek Etherton to inform me that he and others were at the faro beach and actually looking at the Purple Sandpiper.  Within twenty minutes we were also on site where we met Derek's happy band of pilgrims including wife, Barbara, Jerry and Barabara Laycock along with Ricky and Sonya Owen, the latter couple having driven up earlier in the morning from La Linea.

Naturally, on meeting our friends we were informed that the bird had flown off westwards so we walked along a couple of hundred metres to the next rocky outcrop where we caught up with the Purple Sandpiper.  It took some time to get decent views as the bird seemed to prefer to feed in the gulley's rather than be exposed but, on the other hand, good views of both Turnstone and Sanderling.  Far more Cormorants this morning, both in flight and resting.  On the beach we were entertained by a couple of Audouin's Gulls that resented their territory being occupied by these small waders, especially when a Turnstone walked off with a good-sized crab on its beak.  Must have been worthwhile as these shore-feeding birds were joined by a handful of Rock Doves - or Feral Pigeons if you prefer.  Leaving our friends we also added White Wagtail, Serin, Blackbird and Collared Dove.

Shopping completed and back to the hotel so that I could use the scope to check out the gulls resting on both beach and sea.  Mainly Yellow-legged and Lesser Black-backed but also a good number of Black-headed and a single Mediterranean Gull on the beach.  Five gull species in less than an hour. Further out at sea I was in time to see an adult Gannet successfully dive into the water in search of an early dinner.

Check out the accompanying website at http://www.birdingaxarquia.weebly.com for the latest sightings, photographs and additional information.
Posted by Bob Wright - The Axarquia Birder at 06:33