A very cloudy start down on the coast and even some fine drizzle as I neared the clouds driving up the mountain motorway from Malaga but once on the plain and approaching Antequera I could see the blue breaks in the sky.  By the time I reached Cordoba it was a lovely, warm sunny day with clear blue skies.  What an easy journey, even the single carriageway towards Badajoz to the north of Cordoba.  Concentrating on the driving but still time to see Azure-winged Magpie and Cattle Egret along with Spotless Starling, a resting Buzzard and a pair of Ravens flying slowly away to my left. The final bird before leaving Andalucia and entering the region of Extremedura was a single Lapwing.

Following a stop for a quick clara con lemon (lemon shandy) I was was rather surprised to see it came accompanied by a tapa of seven, yes 7, small sausages.  And then the bill; exactly one Euro! Onwards and upwards and no sooner had I turned right for the country road up to the Embalse Zujar and I had a trio of Cranes in the field to my right and looking left saw another trio at close quarters. No point stopping I thought, I'm bound to see scores, if not hundreds, as I travel along this road.  Yes, you guessed right, not another crane before I reached my hotel in Obando and checked in.  In the same early area of this road I also added Crested Lark and Goldfinch and a little further along the road cam across an old bare tree housing eight White Stork nests complete with occupants.

Somehow the instructions were incorrect so I did not find the intended track to the right which would have taken me deep into the steppe and the chance of both bustards and both sandgrouse.  I did, however, come across a large pond adjacent to the road which held a single Heron, two pairs of Teal, a pair of Mallard and a handful of Black-headed Gulls.  Checking the neighbouring fences also produced a few House Sparrows and a Corn Bunting along with White Wagtail and, best of all, a couple of Lesser Short-toed Larks.  Continuing on I added Stonechat and more Corn Buntings with a large flock of Jackdaw beneath a bridge over a steep valley and crossing the dam of the Zujar reservoir added both Collared and Rock Dove with a preening Cormorant on the rocky river outlet below.  Finally, a handful of Serins were feeding in the trees next to my parked car. 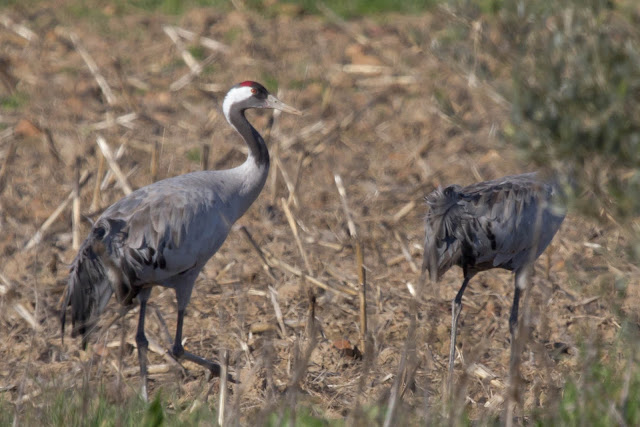 Having checked in at the hotel and taken the necessaries to my room I then set off to explore the neighbouring village of Obunda and soon found the deserted rice fields on the other side.  There followed an hour or so of me driving up and down the tracks between the fields accompanied by thousands of sparrows in many separate flocks.  Whilst, initially, the birds were House Sparrows before long I was also encountering large flocks of Spanish Sparrows and further in to the area even cam across large flocks of Tree Sparrow.  But the main attraction were the Cranes, there were scores of them. 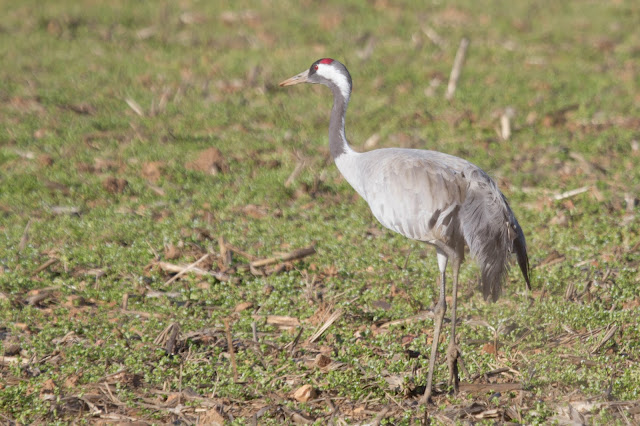 As I drove the tracks I cam across a trio of Hoopoe, then more and more again, a total of ten.  But off to my right I could see a well-flooded rice field (most of the fields seemed to have been totally abandoned after harvest unlike the rice fields in both the Donana and La Janda) housing a flock of birds.  Scope out and it revealed 90 Black-tailed Godwits along with three Green Sandpiper and in excess of an hundred Lapwing spread over the surrounding ploughed fields.  Then, to the left, a single Golden Plover.  A short drive further on and a new track leading towards the birds gave an opportunity of a closer look and it turned out to be four Golden Plover along with a Little Stint.  In a bare tree behind the group sat a lone Buzzard taking its rest.


Continuing with my exploration of the rice fields produced more sparrows of all three species previously seen along with Lapwings and Cranes in small family groups.  Then, back on a country lane, a turn to the right which seemed to hold more Cranes finally produced the "mother lode" for the area where there must have been well in excess of 500.  A nearby wet area also held a pair of Little Egrets.

Time to make my way back to the hotel I had a whole raft of Cattle Egrets satin a line and then the first of two Iberian Grey Shrikes was noted followed by a Kestrel and, finally, a Raven flying away from me.  Quite a welcome and now for the big day on Saturday when, hopefully, I will see some sandgrouse and bustards.

Check out the accompanying website at http://www.birdingaxarquia.weebly.com for the latest sightings, photographs and additional information.
Posted by Bob Wright - The Axarquia Birder at 10:28