With 20 fellow members of the Andalucia Bird Society, led by local guide and ABS member, William Haworth accompanied by his assistant Neil Renwick, we spent a most enjoyable days birding in glorious weather on the eastern border of Badajoz province in Extremadura in search of some of the most iconic species of the area's steppe and rice field habitat.  And what a start to the day it was.  Nevermind the calling Collared Doves, gathered in the car park of the Hotel Don Juan we looked over the fence and adjoining road and there in the stubble field was a small group of Stone Curlew; a most auspicious start to the day and promise of great sightings to come.  Indeed, between the group we managed to record just on 80 species during the day.

Our first part of the morning included driving around some local paddy fields before moving onto the rolling downs that help make up the steppe territory before finally taking in some of the reservoirs around Zorito to the north of us.  Certainly no shortage of both Lapwing and Cranes early on and once into the harvested rice fields we quickly added Corn Bunting, Stonechat, Blackbird, Azure-winged Magpie and Chiffchaff.  However, as with yesterday, it was the sheer number of sparrows that took your breath away.  having got accustomed to the flocks, and they to us, it soon became apparent that there were both House and Spanish Sparrow along with a smattering of Tree Sparrows.  Then a group of small "sparrows" followed up from the ditch and we realised that we were looking at, perhaps, a flock of some fifty or more Common Waxbill.  Not content with this sighting, having moved on less then fifty metres we had a cloud of Waxbill leave the next bush and they must have totalled nearer 200 individuals.  Before re-joining the road we had also added Crested Lark, Buzzard, Red Kite and Hoopoe.  By the time our next stop had been completed we had also seen Jackdaw, Iberian Grey Shrike, many Marsh Harriers, Raven and Barn Swallows.

But before reaching our first reservoir we managed two separate sightings of a handful of Great Bustards.  The second group of four were a little further away from the road up against a distant fence but, at least, it did mean that every member of the group had recorded the species.

So on o the first of the reservoirs where we found a very large flock of Shoveler and about a dozen Pintail.  Also present were Great Crested and Black-necked grebes, Mallard, Coot and Cormorants.  Driving down tot a smaller reservoir we stopped to admire a single Squacco Heron and a nearby pair of Great White Egrets.  The pool itself had much of the same along with more Barn Swallows, Little Egrets and a handful of Spoonbill.  Closer inspection also produced Gadwall, Teal and Heron and on a small island a pair of Egyptian Geese.  Nearer to hand we also found Magpie and Sardinian Warbler.  At this point a pair of Black Vultures (also known as Monk Vultures) drifted over.

Moving further around the larger reservoir we came across a number of Wigeon and a very faithful Kingfisher that remained with us for the whole of our lunch break.  More Marsh Harriers and a distant,unidentified eagle over the far hill with a number of Griffon Vultures.  A Sky Lark was singing overhead and and on our return drive we also picked up a Thekla Lark.  Whilst we were busy watching this individual, the members in the following car were looking up and following the Short-toed Eagle!


Working our way back towards Obando along a country road over the steep territory we added Crag Martin and Linnet along with the first of a few Lesser Kestrel.  Not so much the Wood Pigeons but the flocks of Calandra Larks caught our attention followed by the lovely sight of a quartering male Hen Harrier.  Then it was a limited number of Golden Plover and the first Red-legged Partridge of the week-end and a number of Meadow Pipits.

Finally we arrive at the large hides at the Moheda Alta Visitor Centre overlooking the rice fields where the thousands of wintering Cranes had been coming in to roost for the night.  On the way to the hide we stopped to admire a solitary Great White Egret in the now fading light.  Unfortunately, just as Cranes had arrived very early this winter so, it would appear, the return migration was also starting early so we saw only hundreds rather than thousands but, nevertheless, a wonderful sight.  But not just Cranes as we had regular feeding visits from both House and Spanish Sparrows along with both Waxbill and Red Avadavat.  Both Robin and Bluethroat put in an appearance as did a number of Zitting Cisticola.  Our final birds of the day, excluding the quartering Marsh Harriers and a female of that species feeding on a Crane corpse, were Chaffinch and Green Sandpiper and, perhaps best of all, the sight of a Dunnock by a couple of members.

All in all a fabulous day's birding in glorious weather and superb company with many thanks to William Haworth for planning and leading the group. 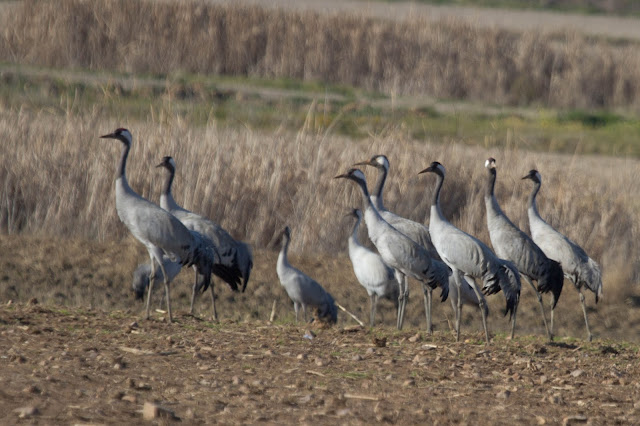 Check out the accompanying website at http://www.birdingaxarquia.weebly.com for the latest sightings, photographs and additional information.
Posted by Bob Wright - The Axarquia Birder at 03:16