Another clear and sunny day but at least the cool breeze made the temperature more bearable.  Off early for the beautiful drive through the forest to the Dehesa de Abjoa site for the SEO Bird Fair and arriving by 8.40 I was able to spend twenty minutes checking out the lake from the nearby road.  So, as well as recording the new Bee-eater colony being built at the side of the road where a recent widening programme had been completed and then, presumably abandoned through lack of money, also picking up numerous early morning Blackbirds, I soon also had the White Stork population in full vie along with scores of Black Kites.  Indeed, at the far end of the water there were a dozen simply resting on the adjoining field.  Both Reed and Great Reed Warblers were busy singing their little hearts out as I took a first look at the water itself.

With the water a little on the rough side many of the birds were taking shelter in the various reed beds but there were still plenty of Coots and Mallards to be seen along with a few Common Pochard.  I found many of the Red-crested Pochards further out with the Flamingo population and, of course, there was a plentiful supply of Great Crested Grebes.  The odd Moorhen ventured forth and even a Little Grebe was seen.  Just the one Grey Heron and then a single Night Heron flew in from behind me near the dam.  In the outlet stream below I eventually found a Melodious Warbler and then the biggest surprise of all as a flock of about twenty-five Pintail Grouse suddenly appeared overhead and rapidly disappeared from sight as they crossed the dam and swung round towards the back of the water.  The birder in me found me watching the spectacle rather than thinking of photographs; I must re-think this automatic response!

A short time was spent at the Bird Fair with lots of Jackdaws, Spotless Starlings and House Sparrows, not to mention the nesting White Storks, about and then I returned to the lake and joined up with John and Jenny Wainwright for a very enjoyable three hours or more in their pleasant and friendly company taking both cars into the main Donana National Park for the anti-clockwise drive down to the Juan Valverde Centre.  But not before another look at the eastern end of the lake where much of the same was seen but also a good number of Purple Swamphen, Little Egret and good numbers of feeding Barn Swallows and Common Swifts above the water.

No sooner had we left the main road than we stopped to admire a male Whinchat on the fence and soon we were making regular checks on the neighbouring fields.  Plenty of Common Swifts passing through and feeding Barn Swallows but ere long we had some of our targeted birds with a very small party of Black-bellied Sandgourse that seemed to be put up by a passing female Montagu's Harrier, which at least made a change from the numerous Black Kites that we had been seeing since first arrival in the area.  At the same time it also disturbed a few of the Collared Pratincoles that had been previously unseen.  This same area had also produces Crested Lark and the first Common Kestrel of the day and then I had my first Northern Wheatear  quickly followed a couple of Spanish Sparrows.

Moving on, not soon after turning on to the long track down to Valverde a pair of Red-rumped swallows and then the first Corn Bunting.  Suddenly the latter was joined by both a Woodchat Shrike (this was to become the dominant recorded bird during the remainder of the day) and a  Blue-headed Wagtail (Iberiae Yellow Wagtail).  A Common Magpie suddenly disappeared into a bush alongside the narrow canal followed by a Calandra Lark on the opposite side of the track and then we arrived at the double bridges where the track zig-zagged over the canals to take a right turn.  What a site this was to be.  This was the bridge that had produced a pair of Marbled Duck for Jenny and John yesterday and they very much wanted a better view.  But where were the ducks? 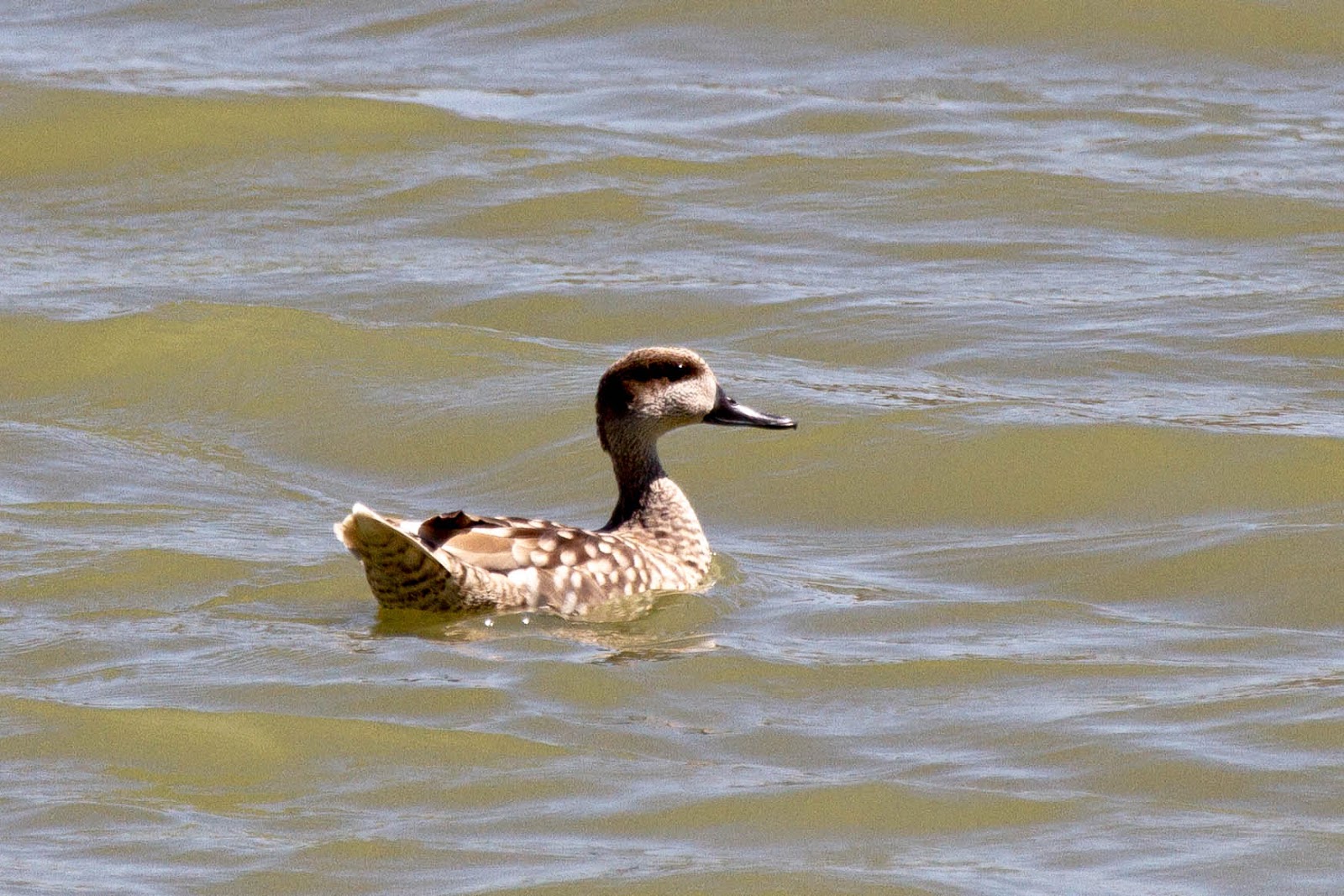 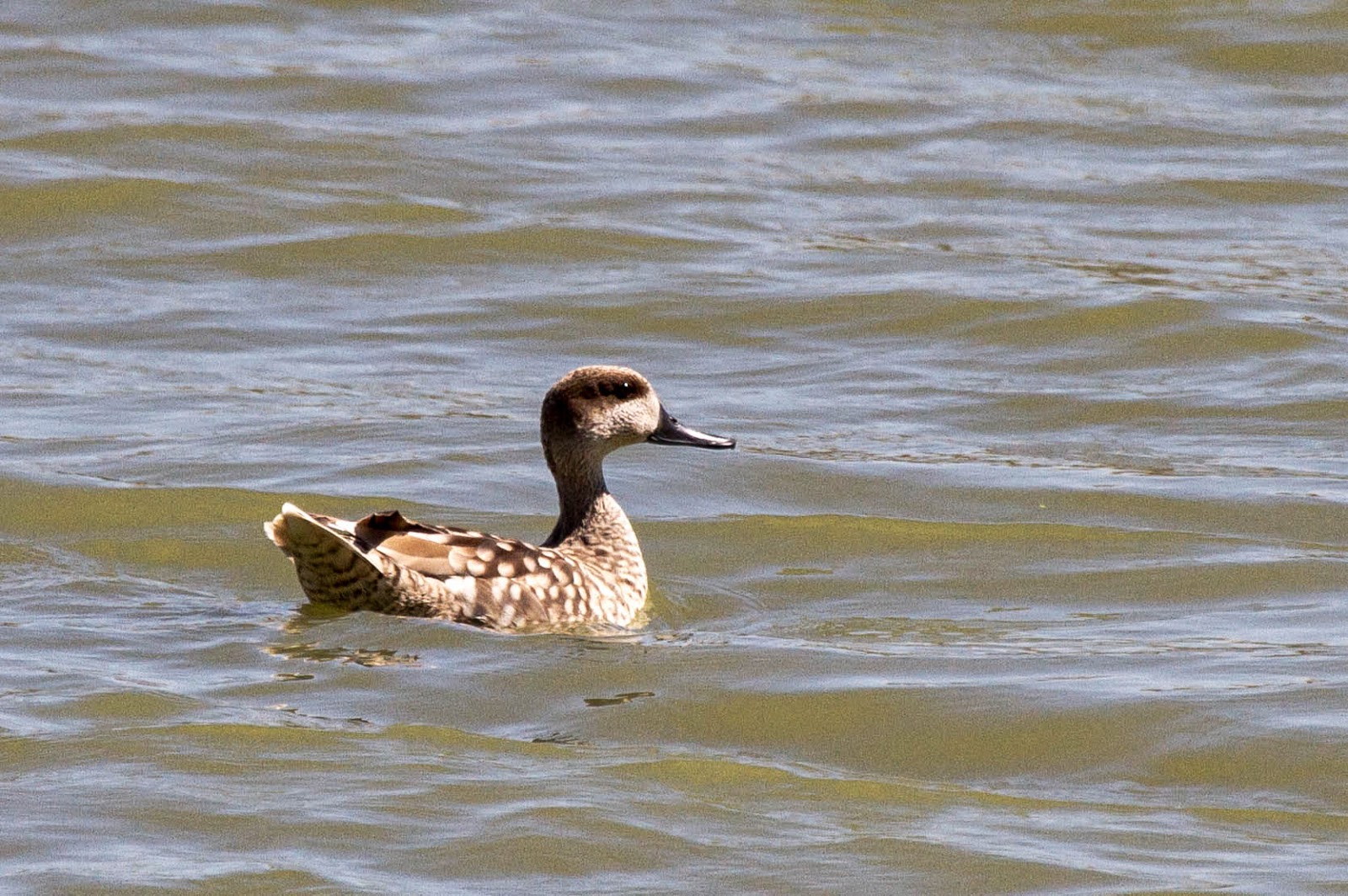 Then I found the resting, partly hidden, under the nearest bush overhanging the entrance to the smaller canal immediately opposite us from the first bridge.  But would they venture forth out into the open?  Patience whilst we watched the feeding Barn Swallows and a gorgeous male Marsh Harrier that rose from a neighbouring ditch was finally rewarded when one, then both, Marbled Ducks paddled out into the main water so giving splendid views.  And as an added bonus a Zitting Cisticola chose to perch on the opposite bridge railing to watch the proceedings.

Leaving John and Jenny I continued on towards the Centre as I wanted to eventually take in both "Coridor Verdes" before returning to my hotel.  The side ponds produced early Glossy Ibis with the main flock near the breeding area adjacent to the Visitors Centre along with a single Purple Heron.  Then most of the score or more of Lesser Kestrels were recorded at the small ruin and then a stop to check out what I thought might be the first Spoonbill of the day as I reached the main lake.  No, not a Spoonbill but a Great White Egret.  The Spoonbills themselves were seen from the other end of the lake when I reached the end of the track and turned right to the small bridge.  Also over the water a quintet of Whiskered Terns made a quick pass and I also noted a few Yellow-legged Gulls.  Continuing on for a short drive to the stables i found a feeding group of Griffon Vultures in the sky accompanied by a single Booted Eagle.  Returning, passing more Spoonbills and Little Egrets I arrived at the Visitors Centre for refreshments and look at the heronry; mainly Cattle Egrets but also a good number of Glosy Ibis and at least two pairs of Night Herons.  And this was where I also met up again with John and Jenny before departing up the return journey, continuing in an anti-clockwise direction.


Other then the first thirty minutes I would have been much better off if I had stayed with John and jenny and got that closer view of the Great White Egret and also picked up the Common Nightjar (see John's report).  As it was, very little to be on the return journey and the first "Green Corridor" was an absolute waste of space and time.  The single car-wide track was very rough and had, judging by the centre growth not be used for six months or more.  Eventually, after about a kilometre I gave up, did a multi-point turn on the track and made my way westwards toward the "Green Corridor" suggested by John and Jenny.  However, I did come across a Stock Dove sat on the track who simply refused to move.  Obviously, this is a bird who does not expect visitors, mechanised or on legs, and only moved as he was bout to join his ancestors.

Back to the first thirty minutes.  It seemed that the right-hand side fence held every possible visiting/arriving passerine.  Numerous Woodchat Shrikes, Crested Larks and Corn Buntings but the speciality was the number of Whinchats also on the fence.  Then, out of the blue, a beautiful male Common Redstart quickly followed by a male Pied Flycatcher.  Add on a Spotted Flycatcher and loads of Blue-headed Wagtails and you very much appreciate the joys of this thirty minute period.  Not a single Kestrel was seen on this, usually very productive, track, just a couple of Goldfinches, Cetti's Warbler and a single Squacco Heron among the Little Egrets half-way down the final straight stretch if track.

The final visit along the second "Green Corridor" was very quiet with just the occasional Woodchat Shrike.  Then, less than two hundred metres from the end on the return leg, a "bump" on top of an electricity pylon produced that magnificent raptor, the Osprey.  Beautiful.  Then it was merely a question of making my way back to Aznalcazar, picking up a Kingfisher on the small river and, finally, a lovely Red Kite as I drove through the wooded country lane after Deheasa de Abajo.  Finally, over 60 species recorded.


Check out the accompanying website at http://www.birdingaxarquia.weebly.com for the latest sightings, photographs and additional information.
Posted by Bob Wright - The Axarquia Birder at 00:47