Donana Day 3 with the Wainwrights

I fell asleep when I got back having first downloaded the photos ready to tidy-up and place on the blogs covering the past four days.  Must have been out for a couple of hours so immediately down to get a slight supper and then John's report had arrived re his and Jenny's day in the Donana.  Looks like his report first then make a start on mine.

Thankful for the breeze otherwise it would have been very hot.  We set off for the Laguna de Abajo to meet up with Bob Wright and on the way we saw Collared Doves, Woodpigeons, Spotless Starlings, Raven, Black Kite, White Storks, Blackbirds, Woodchat Shrikes and our first Stonechat of the trip. Also close to the access tracks leading to the Valverde Centre we saw two Pintail Sandgrouse flying and in the fields to our left more then thirty Black Kites lifted off as we approached, as well as a good number of White Storks, then a male Montagu´s flew past with several Bee-eaters diving at it.

Onto the Laguna de Abajo, where the Black kites were sat in the fields by the sluice gates, also in the area we found Red-crested and Common Pochard, Great Crested, Little and a single Black-necked Grebe.  Five Purple Swamphens were creating havoc on the banks and in the reed beds and the Common Coots and Moorhens were giving them a wide berth.  A few Mallard, Little Egrets, White Storks and three Great Reed Warblers were also present.

Bob turned up and we headed for the Valverde Centre to locate the Marbled Ducks, just after we joined the access track we stopped to check for the Collared Pratincoles, we found these attacking a ring-tail Montagu´s Harrier and then a flock of some fifteen Pintailed Sandgrouse were disturbed by the same bird.  Bob found a Northern Wheatear here and several Spanish Sparrows were noted also. Grey Herons, Zitting Cisticolas, Cattle Egrets,  a Greenshank, several female Whinchats, Crested Larks, Woodchat Shrikes, Corn Buntings, and  I believe Bob picked up a Yellow Wagtail (iberiae) and Red-rumped Swallows, which we missed - at the time  - but picked up later on.

At the "bridge" we got our target bird the pair of Marbled Ducks, also here we saw Great Reed Warblers, Barn Swallows, Mallard and just after we parted company, a single Sand Martin flew past and up the channel.


In and around the wet areas on the right of the track approaching the centre, we found Purple Heron, Glossy Ibis, Spoonbill, two male Whinchats, a couple of Griffon Vultures and lots of Yellow Wagtails (iberiae).


While we were having coffee in the centre, we saw Night Herons, Squacco, Glossy Ibis, Purple Swamphens,Purple and Grey Herons and Gadwall; here we met up with Bob again.

After saying our farewells again, we headed for the dead-end track that leads down to the Park boundary.  As we pulled up just prior to the bridge, for a bite to eat, we spotted another pair of Squacco Herons.  Off again, we parked on the bridge and there was the Great White Egret feeding alongside a Little Egret, they spotted us and flew a little to the rear of us, so as I backed the car up, Jenny says stop look on the metal railing and perched there was a Common Nightjar.  It stayed for a few photos and then flew off into the trees still giving us views through the branches.  As we recrossed the bridge the Great White Egret had returned and photos were taken. 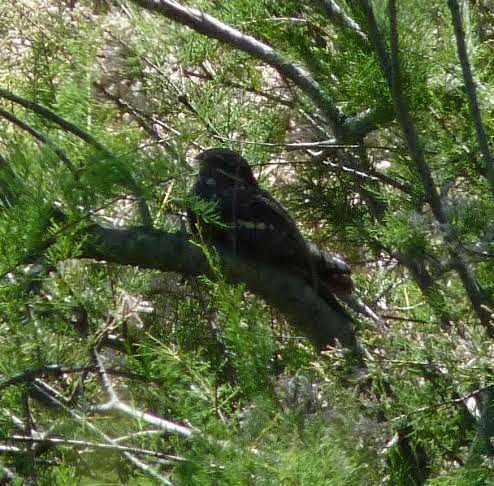 Then retracing our steps past the wet areas to the "Marbled Duck" bridge we saw Northern and Black-eared Wheatears, more Whinchats, a Spectacled Warbler, a small flock of Linnets and two Calandra Larks.


We took the cross country track to the Lesser Kestrel site, where we found seven of them.  Lots more Purple Herons, Glossy Ibis, Little Egrets and Grey Herons were seen down in the direction of the Night Herony where we counted nearly forty birds.  Also about in the area we saw Nightingales, Ravens, Black-winged Stilts, House Sparrows, Common and Azure-winged Magpies with Melodious, Sardinian and Cetti´s Warblers and a Chiffchaff.

Another great day and a few more birds on the trip tick list.

What a great day!  I know because I shared some of the hours but, obviously missed out on the later birds.

Posted by Bob Wright - The Axarquia Birder at 13:52