Twelve of us met at the service station on the motorway above Loja for this month's meeting of the Axarquia Bird Group to  the drive up the mountain track to seek out our three targeted birds on the Sierra Loja.  And we were to be most successful.  It was good to welcome new members Howard and Angelina Heerens from Almarche, Arthur Pither, along with Pat Shaw from Nerja, Gerry Collins and Diana Porter from Salobrena, Pat and Eric Lyon from Sayalongs, Jim Moore and Brian Greene from Triana and myself from Lake Vinuela.

Lots of House Martins around the service station and as soon as we had started we had the odd Collared Dove and more Rock Doves approaching the lower quarry which has now been converted into a picnic area.  This first stop produced a pair of Ravens overhead plus more House Martins and Barn Swallows along with the first Rock Bunting.  No shortage of both Goldfinches and House Sparrows.  Moving up through the trees towards the main quarry we had a number of Red-legged Partridge sightings (indeed, they continued to appear from bottom to top of the mountain) along with Azure-winged Magpies, Blue Rock Thrushes, Mistle Thrush and Coal Tit.  Needless to say, very many Chaffinches were both heard and seen.

Stopping at the main quarry we had a whole range of sightings but not the numerous Choughs that had been seen on previous occasions, these were to come as we moved up the track.  We soon had a couple of male Blue Rock Thrushes and Crag Martins were sweeping across the rock face where we even discovered an occupied nest high up on the wall under a slender overhang.  Next up a Black Wheatear and then a female Black Redstart feeding a single recently-fledged chick.  The male was seen later on so maybe the chicks had dispersed but, certainly, the female's efforts were concentrated on the single youngster. 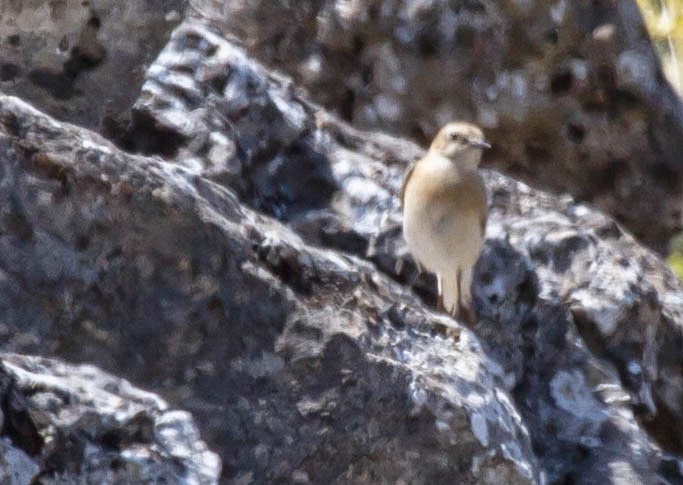 Whilst another Rock Bunting and the first Rock Sparrows of the day were also recorded, the main joy was the discovery of our first "target bird" as it suddenly appeared across the face of nearby crag and took up station in a little shade above its nest.  Not the clearest of vies of this distant Eagle Owl but everyone present managed to get a good view through one of the two scopes that had been focused on the nest.

Then it was off up the mountain track again passing both Crested and Thekla Larks, the latter after passing beyond the tree-line.  A couple of Hoopoes put in an appearance and then the cries of the the Choughs alerted us top their presence and, a little later on, we even had the resident Jackdaws for company.

Very close to the marble quarry we all had a reasonably close view of a Southern Grey Shrike and then the rocky area near the electricity sub-station produced the resident Little Owl but, unfortunately, not all the group managed to get a sighting. 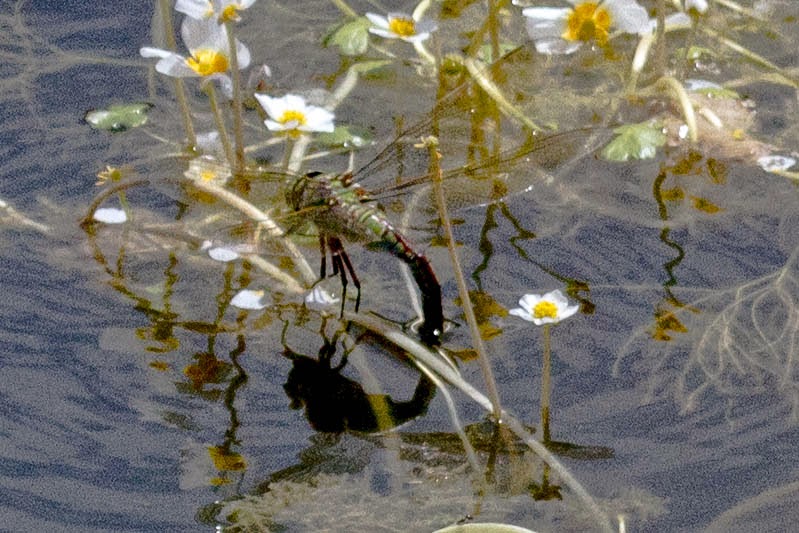 Both Linnets and Stonechats were seen as we headed up for our picnic lunch at the Charo del Negro whilst we also saw many Black-eared Wheatears, mainly males but also the occasional female.  Eric managed to find a female Subalpine Warbler and our arrival at the pond was welcomed by a pair of Greenfinches.  Lots of Linnets and Goldfinches, along with Rock Sparrows, were making use of the water for both drinking and bathing and even another Blue Rock Thrush could not distract us from finding our second target bird of the day, the Rock Thrush.  Not only a male but also a female was seen flying above the cliff face carrying food so, presumably, chicks in the nest already.

Whilst at the Charco del negro we had numerous Common Swifts, and even both House Martins and Barn Swallows, overhead but, possibly, the better sightings were those of a Griffon Vulture and a Common Kestrel.

The short drive round the back of the peak produced very little extra other than many more Red-legged Partridges, Spotless Starlings, Rock Sparrows and our only Corn Bunting of the day.  Black-eared Wheatears continued to show well and finally, just before setting out on the start of the return journey down the mountain, we had a second Rock Thrush.

The downward journey continued to provide Black-eared Wheatears but, at last, we did manage to find a Northern Wheatear.  Stopping at the breeding site of the well-known Spectacled Warbler, a little concentrated listened identified the bird's song and there, for all to see, was the bird itself.  So, finally, all three targeted birds recorded by all present. 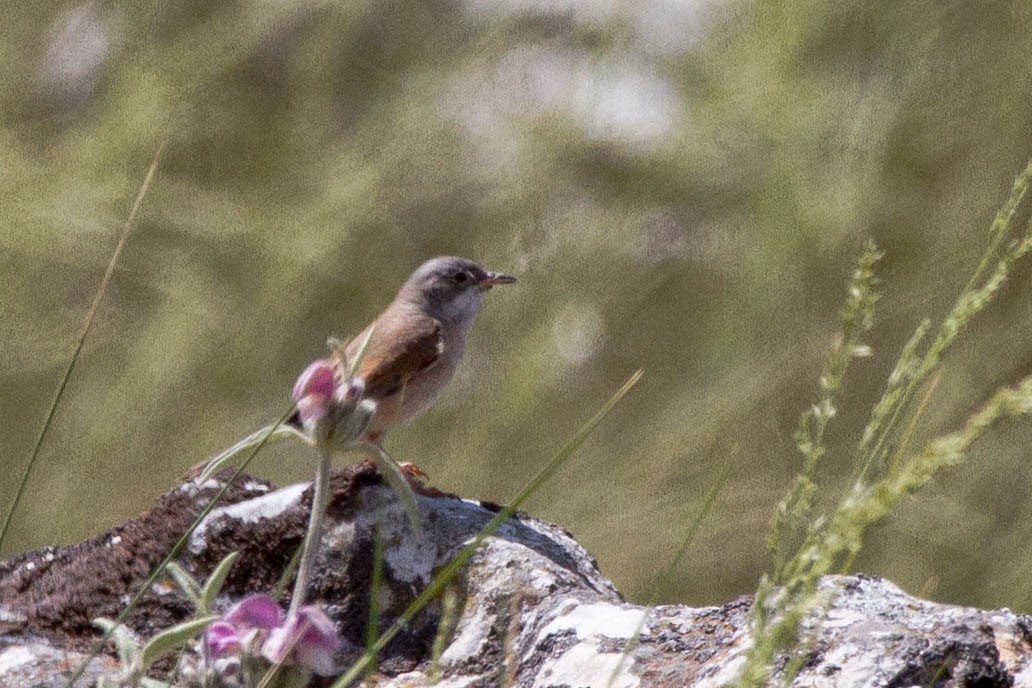 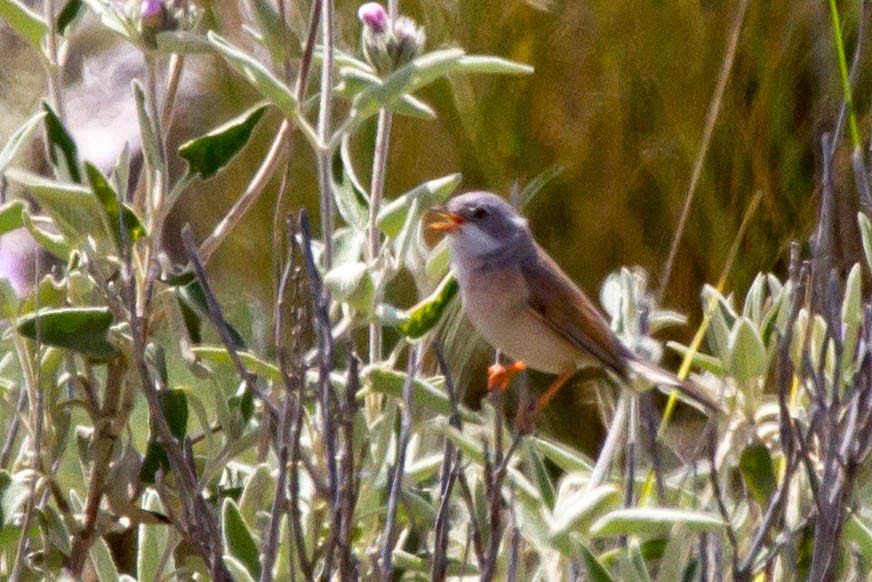 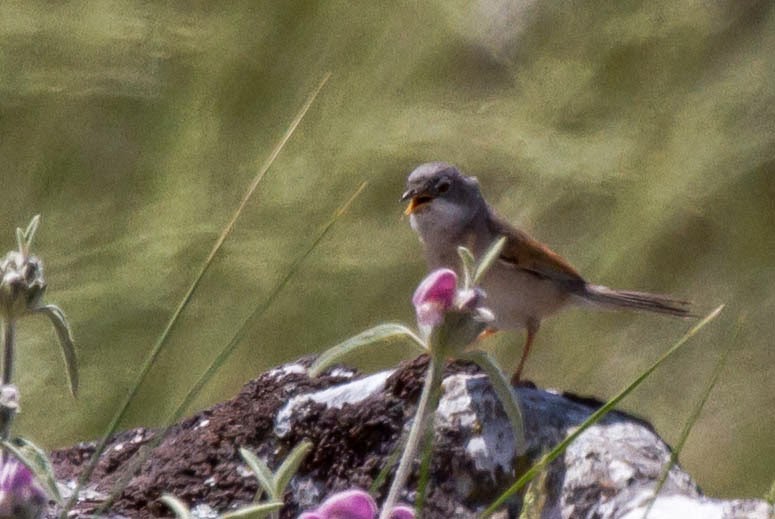 The final stop was a return to the top quarry to take another look at the Eagle Owl now that the cliff was no longer in shadow.  But no bird at home upon arrival.  Not to worry, the male duly returned to give us yet another special treat but, alas, the youngsters were not to be seen.  meanwhile, a short walk back along the track to find the Sardinian Warbler that flew in front of the car led to pat finding a rather lovely Melodious Warbler in a tree not far above the track and whilst stopping to admire the bird, a male Dartford Warbler decided that the observers were too close, looked out form the top of his gorse bush and decided to move across the track.

Time then to make our various ways back home with over 40 species recorded but for our two cars, eight members, a short stop just after leaving Loja provided a splendid opportunity to watch two pairs of Montagu's Harriers quartering a large corn field.  The raptors seemed to be doing very well and finding plenty of food  judging by that carried in their talons and we even had the privilege of watching an aerial food exchange between one of the pairs.  Magnificent!


Check out the accompanying website at http://www.birdingaxarquia.weebly.com for the latest sightings, photographs and additional information.
Posted by Bob Wright - The Axarquia Birder at 09:29