Friday 2 May
Up early and off to the Odiel Marshes about forty miles away, arriving at the Visitors Centre by 9am.  Again, with clear skies and the sun already blazing down it looks like another very hot day.  (Indeed it was bit there was certainly more scattered cloud developing during the late afternoon.)  Too keen by half as high tide was only three hours previously and still very little mud exposed to attract the waders.  Not withstanding, the water immediately opposite the entrance to the former cafe was full of small waders; mainly Dunlin but also significant numbers of Curlew Sandpipers along with a good number of Ringed Plovers.  To the rear, a number of Flamingos were already feeding whilst the Yellow-legged Gulls seemed more concerned with resting.

The small pool held very few birds, mainly Common Coots and Mallards but then I did pick up a couple of pairs of Gadwall and a Red-crested Pochard appeared out of the reeds.  A number of Moorhen foraged away whilst, overhead, there was a constant stream of Common Swifts and Barn Swallows with the very occasional House Martin.  To add to the excitement a pair of Shelduck flew a circle above me before disappearing from whence they had come.  At this point also Magpie, Little Egret and Black-winged Stilt were also recorded.

A 400m walk down to the public hide produced scores of Dunlin and Ringed Plovers, especially once I was safely ensconced inside the hide.  First one then a second Grey Plover appeared on the scene and not too far away the first of a couple of Whimbrels seen during the morning.  Before heading off south down the spit, a Night Heron dashed form its hiding place behind the Visitors Centre and the first Blackbird was recorded as it walked across the road on the nearby bridge.  As I left the bridge area I regularly stopped to check out the small waders in the lagoons on the right and noted a large number of Redshank plus a very small number of Kentish Plovers.

Passing the first set of woods on the right after crossing the high bridge, I had a single Wood Pigeon and then the first of the breeding White Storks.  A magnificent male Marsh Harrier crossed in front of me.  The laguna at the end of the inlet was rapidly emptying but, in addition to more of the same waders, I was also able to find the first of many Spoonbills to be seen along with a couple of Curlew and at least a quartet of Bar-tailed Godwits.   A Grey Heron stood guard at he side of the water and then a steady number of Turnstones were recorded as I moved on down the spit.  At the same tome a single Sandwich Tern made a pass over the still watered inlet before disappearing over towards the Odiel. 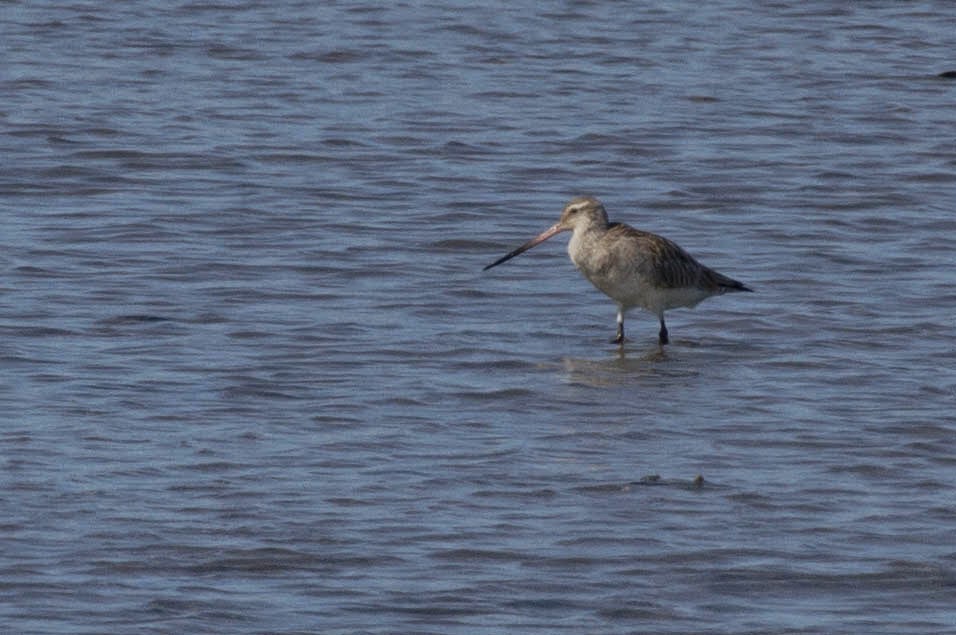 Then it was far down towards the lighthouse passing the numerous anglers and others making their way to one of the beaches for the day (it turned out to be yet another public holiday today!).   Nothing to see until suddenly I was confronted by a Northern Wheatear which appeared out of the huge defence stones.  Within minutes, stopping to check out a large sandy scrape, I suddenly had the most handsome Black-eared Wheatear on the rocks below me.  What were these birds doing here, had they just made landfall?

The journey back up the spit eventually turned up good numbers of Sanderling on the Odiel side along with a good number of Grey Plovers and a quintet of Little Terns.  Crested Lark was seen on the road and, of course, there were a few Lesser Black-backed Gulls. 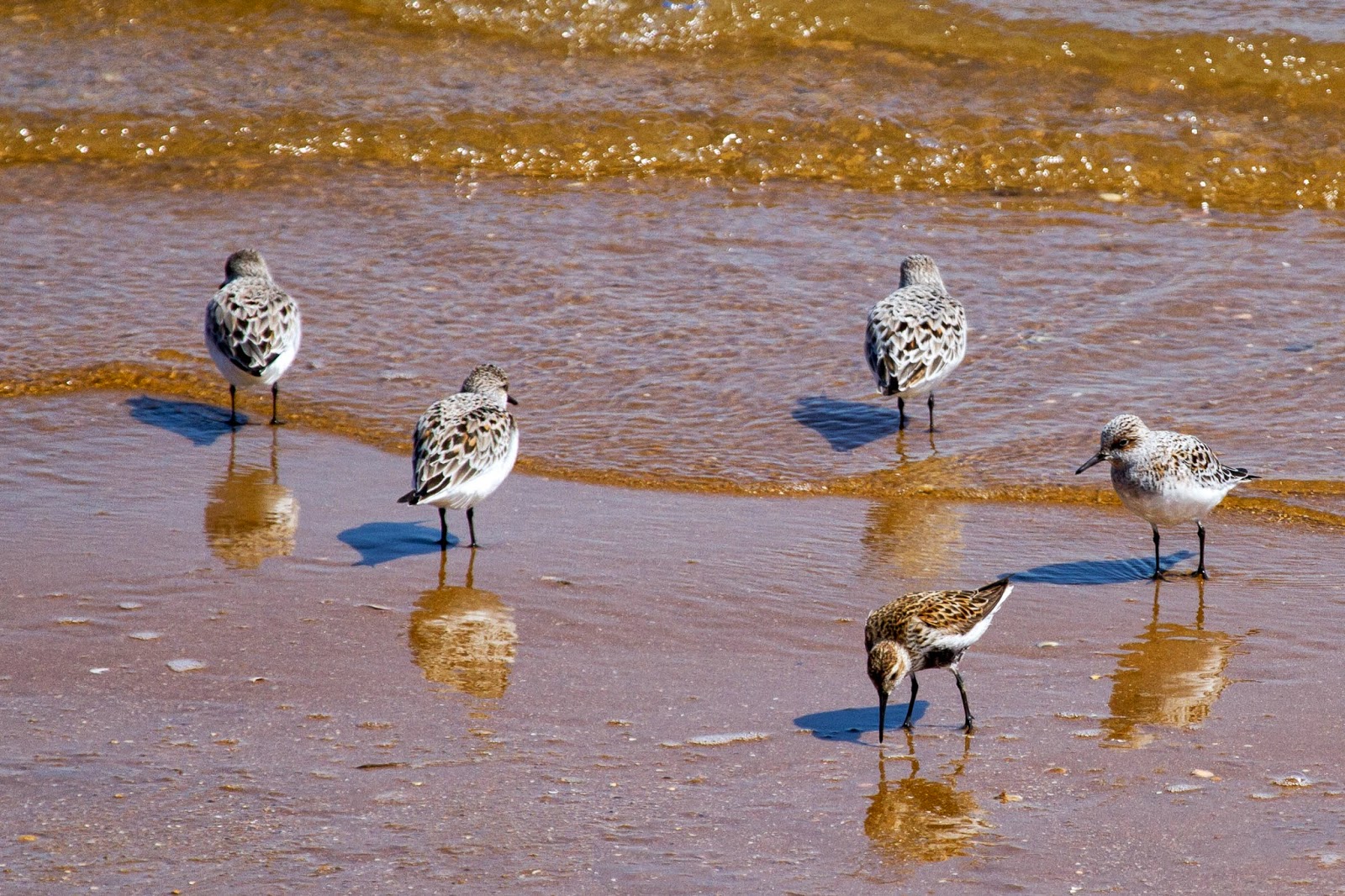 The next stop was at the old brick hide overlooking the Laguna de la Mujer, on the eastern outskirts of Huelva on the Matalascanas road.  A good stop this as it produced my fist Pied Flycatcher of the year, a lovely male, plus numerous Azure-winged Magpies.  There were a couple of Cattle Egrets on the entrance road and then both Purple heron and Purple Swamphen on the water's edge.  Overhead, the Barn Swallows were joined by a handful or more Whiskered Terns.  The far side of the water contained a single Great Crested Grebe, its partner no doubt busy preparing the nest.

Leaving Matalascanas for El Rocio, having recorded a Buzzard on the last part of the journey, I stopped first at a very dry El Accebuche centre which produced my first Spotted Flycatcher of the year.  Also seen was a Hoopoe and a small flock of Bee-eaters.  in addition to the Azure-winged Magpies, House Sparrows and Spotless Starlings, I did manage to see a Little Grebe, pair of Red-rumped Swallows, Serins and a single Woodchat Shrike.

The La Roscina centre was the opposite with abundant supplies of water.  Greeted by Chaffinches I also had a air of Great Tits and near the full lake at the arroyo a number of Spoonbills and Glossy Ibis along with a Red-crested Pochard, more Purple Swamphens, another Purple Heron and a second, nearer, Squacco Heron.  Overhead the resident White Storks seemed to be permanently in the air and then a pair of Black Kites grace me with their presence.  Also seen were both Reed Warbler and Nightingale on the walk around the woods near the old palace, which was also housing a huge colony of House Martin nests on its front.

I had intended to drive straight back to the hotel but being so near decided to pay a short visit to the SEO centre at El Rocio in the hope that the local Imperial Eagle might be in the sky; it was not.  However, I did meet up with John and Jenny Wainwright so that we could compare notes on our day's activities and not only picked up the distant small flock of Greylag Geese but manged to add a Pintail to both our lists; a first of the day and present Donana visit for both of us.  For me, a day's total of 68 species.  Then it was back to the hotel to recover and prepare for the next day.

Check out the accompanying website at http://www.birdingaxarquia.weebly.com for the latest sightings, photographs and additional information.
Posted by Bob Wright - The Axarquia Birder at 14:29