Whilst I was wandering around the Guadalhorthe, John and Jenny Wainwright were visiting my neck of the woods and calling in at both the Rio Velez and the neighbouring harbour at Caleta de Velez to see the, now, long-staying Franjklin's Gull.  As will be seen from John's report the bird is still present so, no doubt, many other local birders will be dropping in to see this American drop-in.


A very warm and pleasant day.

Our journey via Alhama del Granada gave us Jackdaws,Collared Doves, Spotless Starlings, Barn and Red-rumped Swallows, House Martins, Calandra and Crested Larks and a Common Kestrel, while the other side of the town gave us Buzzard, Azure-winged Magpies, Jays, a Woodchat Shrike, Wood Pigeon and a Great Tit.
On our arrival at Rio Velez we were welcomed by a Cetti´s Warbler, also here we saw Rock Doves, Blackbird, and a drake Mallard.  A couple of Moorhens were noted but most little birds were absent, probably due to the number of people walking through the reed beds, although we did get a fleeting view of a Great Reed Warbler, singing from the top of the reeds.
The hide area was desolate bar a few Serins and looking back up the estuary we found Little Egrets, Cormorant, Moorhens, Black-winged Stilts, Blue-headed Wagtails, Robin and House Sparrows.  Only one gull on the water and that was a Black-headed Gull which looked as if its wing was damaged, there were several shearwaters out further but too far to ID.  As we walked back to the car three male Blackcaps and two Goldfinches were noted.

So onto the Caleta de Velez.  We turned off at the big Aldi down to the beach, then turned left and parked in the free (yes free) car park.  Walking across the road and there was a large flock of gulls which included - the now well photographed - Franklin´s Gull, a single Sandwich Tern, Mediterranean, Black-headed, Yellow-legged and two Lesser Black-backed Gulls, Little Egrets and a single Sanderling. 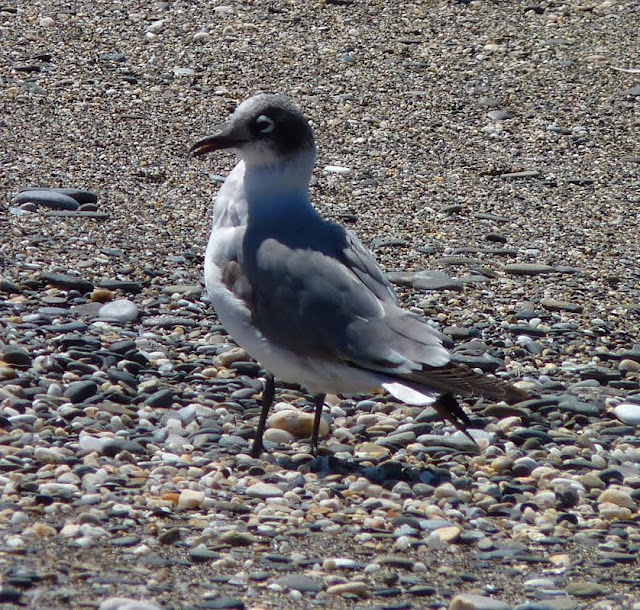 From here we drove up and across the Tejeda range, our first stop being the main mirador and picnic area. Here the first bird seen and heard was the ubiquitous Nuthatch, followed by some good views of Crested Tits.  Also about were Chaffinches, a Great Spotted Woodpecker, Short-toed Treecreeper, Robins, Rock Buntings, Great Tits, a few Serins and a dark-phased Red Squirrel.

Making our way over to the Pilas del Algaidas road we ventured back down to the old railway track and tunnel.  Lots of Chough and Crag Martins across the cliff face were noted, while in and around the base of the cliffs we spotted Wren, Black Wheatears (which were in a battle with two Blue Rock Thrushes).  In addition we saw Black Redstarts as well as Blackbird, House Martin and one Sand Martin and a Sardinian Warbler.
On return to Salar, we logged more Barn Swallows, a Common Kestrel, Magpies, Mistle Thrushes, Calandra Larks and Corn Buntings.

Posted by Bob Wright - The Axarquia Birder at 03:29