"The Birds of the Axarquia" published by CEDER

I have just finished reading a copy of the this new  publication (March 2015) by CEDER ( Centre for Rural Development of the Axarquia) entitled "The Birds of the Axarquia."  I started my reading full of hope and excitement but within minutes was feeling more and more disappointed.  As a result I have undertaken a proper review of the booklet and it appears below.  My understanding is that this book is freely available and for free at local town halls in the Axarquia but, as mentioned on the Facebook site, I suspect you may well have to ask for a copy rather than find it freely displayed. 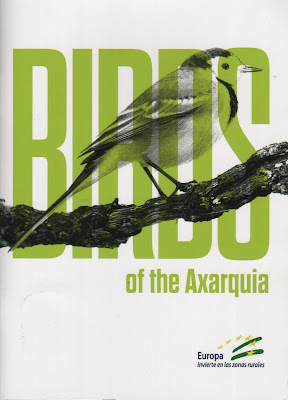 What, on the face of it, seems a rather lovely and encouraging idea to introduce the thousand of British and English-speaking residents in the area to the birds that live and can be found in the Axarquia.  Obviously written by a native birding enthusiast with support and encouragement by many, judging by the credits and acknowledgements that appear at the rear, the booklet sets out the background to the area with the main text covering six distinct habits that may be found in the Axarquia; urban, river, mountain, coastal, forest and agricultural areas.  The booklet ends with a two-page Appendix illustrating the area and topography, names of the body parts of an individual bird but, sadly, the author has either forgotten or been unable to translate the latter from its original Spanish into English.  The booklet is not a bird guide offering suggestions of where to specifically visit to observe birds nor covers all the birds of the area; such a task would be impossible without producing a more substantial edition.  Rather, it is an introduction, an overview, of what might be possible in birding terms in the Axarquia.

I can only assume that this particular booklet is a translation from an original in the Spanish language because the above is the end of all the good news.  This particular booklet fails in every aspect and can only be described as a hindrance rather than a help to any British reader wanting to find out more about our local birds.  There are four specific areas that need to be addressed should, hopefully, the promoters produce a second or replacement edition:

In conclusion, this is a missed opportunity to introduce our Axarquia English-speaking community to its local birds, both resident and migrants.  So much good might have been achieved by taking just that little extra bit of care and attention.  There are many British birders living in the area and all the factual errors referred to above could have been corrected within thirty minutes.  Similarly, a quick read through of the proof by a native English-speaking reader would have amended just about all the basic translation imperfections.  Why o why did not somebody realise this before going to print?  A lot of resources, not to mention actual funding judging by the credits on the reverse cover, have been expended to produce what can only be described as a “pretty booklet” rather than a useful introduction to the birds of the Axarquia.  Indeed, British birders of even average experience will be pulling their hair out in frustration at these most basic glaring errors.

Birds of the Axarquia
This guide aims to serve as an introduction to ornithology for people who want to feel sensations observing these species and who had not previously contemplated entering the amazing world of birds.
As new fans, it has been structured according to different habitats in which you can find birds, and also has tried to show clearly and simply, all those many significant aspects that identify each of the birds that regard this habitat as a place of refuge.

Unfortunately, the substance does not live up to the reality through want of foresight and attention to detail to correct the written errors described above.  Disappointing, perhaps, sums up my overall impression.

Posted by Bob Wright - The Axarquia Birder at 04:09