Just had a report from friends Derek and Barbara Etherton about their marvellous day's birding along with Micky Smith and Luis Alberto Rodriguez; joined later at Fuente by Frank Hair.  By anyone's standards, 80 species in a day is very good going and this number also included a very rare sighting of a Lesser Flamingo at Fiente de Piedra (will they have a successful breeding season this year?) and at least six raptor species not to mention a Temminck's Stint along with three sub-species of the Yellow Wagtail.  What next you might ask.  Read Derek's report and judge for yourself.


Monday morning we met up with Luis Alberto & Mick Smith for a days birding around Fuente.  The plan was to call into El Cruze at Ardales for breakfast, but would you believe it it was closed.  So we continued on our way noting the temperature drop from a healthy 12C at 0800hrs in AdlT to a chilly 3C in Campillos. Breakfasted and on our way by 0930hrs we took the lower back track across the fields and olive groves for our target birds, Montague Harriers.  Barely onto the mud track we found our first raptor of the day, a Buzzard and scanning around the ploughed fields we soon found Crested Lark, Spotless Starling, Meadow Pipit, Red-legged Partridge, Rock and Collared Doves.  We had gone but a kilometre when the first Montague's was seen low above the field to our left.  Driving to the edge we were fortunate enough to observe 2 pairs of birds in their display/courting mode.  This went on for several minutes until one pair landed on the ground and the other pair disappearing into the distance.  Buoyed by this early find we quickly became aware of many Calandra Lark, Yellow Wagtails [more about these later], Northern Wheatear, Linnet and Short-toed Lark in the fields whilst above them the first of the seasons [for us] of Gull-billed Terns flew and called.  Zitting Cisticolas vied for attention and Jackdaws were on the ruined buildings which also attracted Barn Swallows.  The lazy wing beats of a passing Marsh Harrier contrasted with the more elegant Montague's.

Time was passing quickly and having said to Frank Hair we would be at the visitor centre around 1130hrs we decided to press on knowing we would return on the higher track to find any missing birds.  Plenty of Woodchat Shrikes were on bushes as we drove in to Fuente on the recently graded back track.  Plenty of Shovellers, Mallards, Pochard, Coot and Black-headed Gulls were to the left and these were joined by Redshank, Common Sandpiper, a solo Snipe, a couple of Little Stint and a Ruff.  Knowing that Frankie was waiting for us we hurried along to meet him at the visitor centre and after the necessary we started to walk around the top part.  In the scrub trees we soon found Chiffchaff, Whitethroat and more Linnets whilst in the near distance by the wooden bridge more waders were noted.  Scoping these we soon found Water Pipit, Kentish and Little Ringed Plover, Avocet, Green Sandpiper and, of course, Moorhens.  Several Lesser Kestrel hawked for insects and a Common Kestrel hovered toward the rail station.

Walking on to the viewpoint with the large tree we could see many Greater Flamingo and eventually found a solo Lesser Flamingo hiding amongst them.  A dozen Shelduck were feeding and close to them some smaller waders were busy.  Now if I had been by myself I would never have been able to I.D the Temminck's Stint that was amongst the Little Stints and Dunlin, however, LA and Frankie soon pointed out the subtle difference.  I was so pleased they were there.

Round to the hides and no sooner settled than loud kids with doting grandparents/mummies & daddies disturbed the peace, do they have no idea or am I just a grumpy old man?   Answers please to.........Anyway we managed to add a few more species including Red Crested Pochard, Gadwall, Purple Swamphen, Mediterranean Gull, Sardinian Warbler, Robin and Red-rumped Swallow.  We enjoyed the couple of Mongoose (Mongeese or Mongaggle [Google collective noun]) that Mick found, seemingly sunbathing with very watchful rabbits taking note! 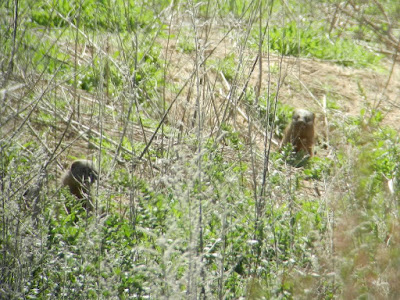 Back to the viewpoint for refreshments and to our delight joining the Chiffchaffs in the big tree was a super Subalpine Warbler.  Love these little birds and this year there seems so many about, no complaints on that score.

Walking the bottom path we paid attention to the Yellow Wagtails [mentioned earlier] and noticed that in close proximity were flavissima [Britain], iberiae [Spain] and cinereocapilla [Italy].  Lovely to see all these little differences and I.D. them correctly.  Incidently, a remaining White Wagtail came to join them. Approaching the bridge more waders had appeared and our solitary Wood Sandpiper was now joined by four more.  The Ruff had moved over as had the Avocets and of course Black-winged Stilts were their usual loud self.  A couple of Grey Plover were further away and more and more Yellow Wagtails joined in the feeding group.

Whilst at the far end of the bridge we could hear a Little Owl call with another answering it, and it seemed to be coming from the car park area.  A quick scan showed nothing but a little later upon returning to the car Barbara scanned the big Holm Oak and found one tucked away deep in the branches but keeping a beady eye on all that past by.

I've missed off a couple of birds in correct order so I'll add Raven, Booted Eagles, Stonechat, Chaffinch and Serin and tell you that we clocked up an amazing 80 species during the time spent here.

A lovely day, smashing company, thank you all.

Great report of a wonderful day and I am sure that many of us would very much have liked to have been with you for the day.

Check out the accompanying website at http://www.birdingaxarquia.weebly.com for the latest sightings, photographs and additional information.
Posted by Bob Wright - The Axarquia Birder at 07:25