Tenerife Summary and the "Spanish Specials"

Now back from our week on the Canarian island of Tenerife with Barbara and Derek Etherton and, it would appear, the weather was, perhaps, better back here in Malaga province!  Certainly, if is quantity you seek in your birding then Tenerife is not the place to be.  Five consecutive days of birding covering just about all the "hot spots" of the island finally produced a grand total of 45 species with the highest single day recording being 27.  On the other hand, it did give us the opportunity to search for and locate some of the island's endemic and rarer species, species that are not on the usual bird list in mainland Spain.  I have ignored the number of Muscovy Ducks that seem to have been seen, including at our apartment complex. and also  the handful of Whistling Ducks that we could only presumed were captive ducks and kept on the local golf course to give a little colour.  Maybe the course par is a little on the low side and this was the only chance of the participants to see a birdie!  The most common bird was the Collared Dove but also very many sightings of Blackbird and Common Kestrel.


During our week we found two "mystery birds"; one seemed very familiar and the other completely unknown.  No sooner had I mentioned the first in a blog than answers started to arrive.  Derek and I were right, we had seen this bird before but in its more natural area so this probably explains why we thought "Tufted Duck" knowing that something was very wrong.  Once the name "Ring-necked Duck" had been mentioned many happy respective memories came flooding back.  Having mentioned a "Back Magpie" seen on the local golf course in a blog and contacted local birder Beneharo Rodriguez, I got replies from two sources to tell me about the Long-tailed Glossy Starling that has been regularly seen for, at least, the past eight years.

We were fortunate enough, lucky with a few sightings, to eventually find 12 special birds and even managed to get a shot of most.

We were hoping to find the Blue-winged Teal on the ponds at Tejina that had been reported as having arrived from America.  Instead we found two males and a female Ring-necked Duck on the far side as the light was rapidly disappearing.  (I was later to discover that there had been originally three males.) 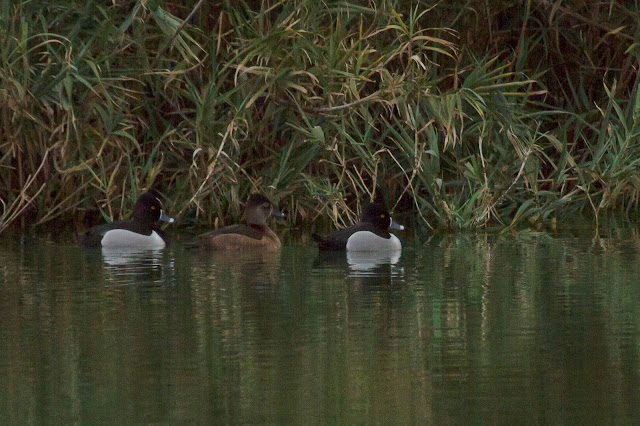 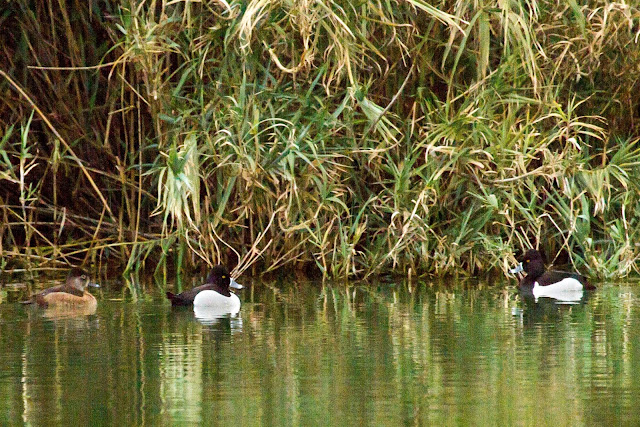 A quick glimpse then a couple wandered over the track immediately in front of us when visiting a nearby site of scrub.  My first observation since finding a couple of birds when visiting Gibraltar (the only site to see the birds on mainland Europe) over five years ago. 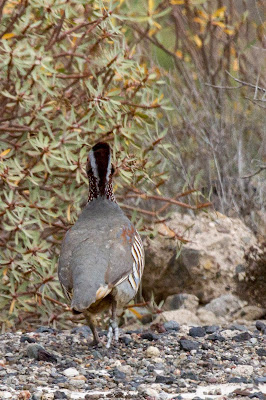 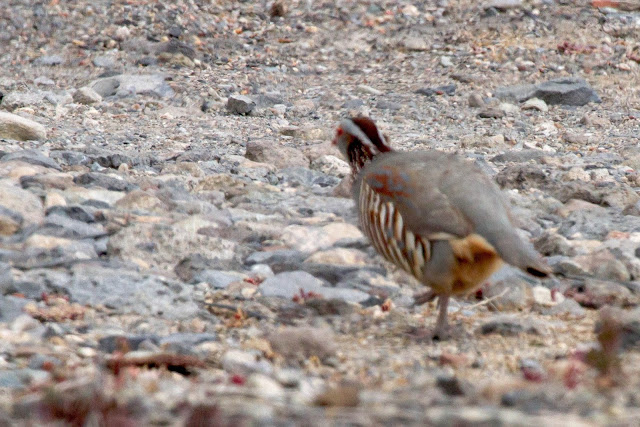 
The raptor to see and we were very lucky to watch the behaviour of a very high male in very sunny conditions.  Indeed, we would not have found the bird had not Beneharo stopped and pointed out the bird on our visit to Punta de Teno on the far north-west coast.  Then, two days later, Derek and I had a male bird immediately overhead showing very well but, with o camera to hand, had disappeared by the time we took out our telephones as a last minute resort.  With regard to the birds in the Punta de Teno area, Beneharo was able to report that there were now at least 12 breeding pairs whereas as recently as 2002 there were only just the two breeding pairs.


Fresh falls of Common Swift were seen near the coast, especially Las Galletas, but descending the mountains of the Agana to reach the North Airport we found another large feeding flock of swifts.  I dare not say at the time but I kept thinking I was looking, occasionally, at barn Swallows without forked tails as what appeared to be a dull red marking appeared near the head as the birds swooped around us.  The birds appeared slightly smaller than Common and more the size of Barn Swallows yet these were most definitely not.  It took a little research to confirm that we had actually seen Plain Swift and made all the more likely when we read that the bird was the common swift of the islands.

This is the common pipit of the Canary Islands and once found these little birds seemed completely oblivious to all else around them as they continued to feed on the ground around the many shrubs. 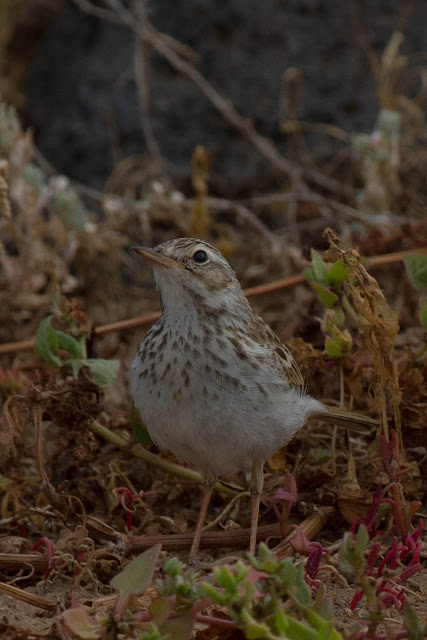 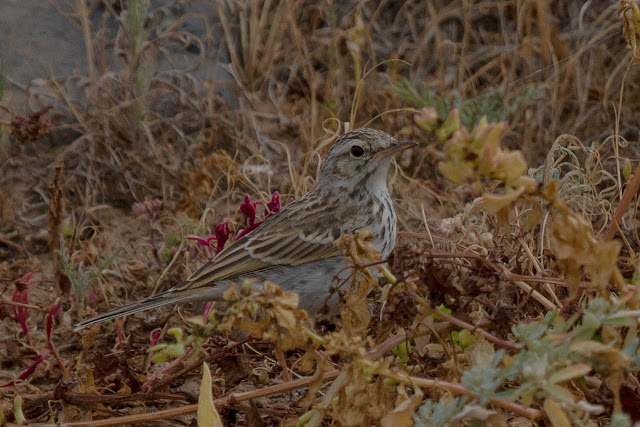 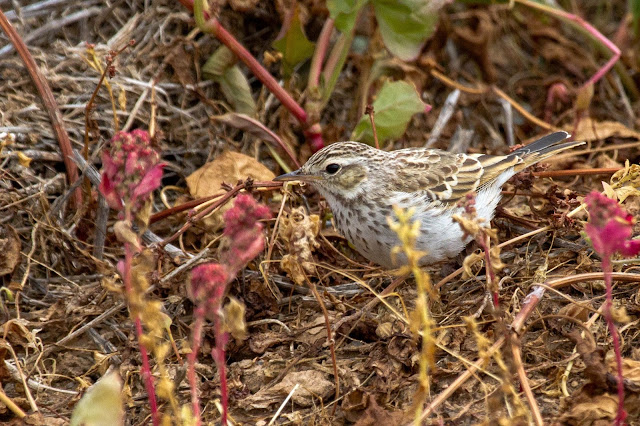 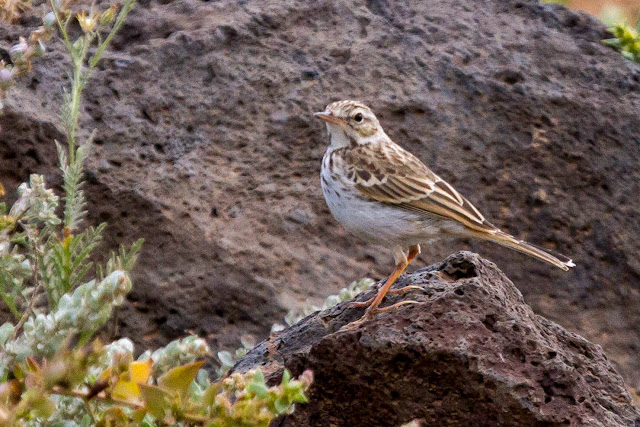 Heard near Vilaflor having just seen our first Blue Chaffinch then a short sighting as a pair of birds rested in a low, open bush on the ground above us but, unfortunately again, without a really clear shot for a photograph.

The most common warble and obviously an early breeder.  having seen a good number of individuals we then came across an adult feeding a full-grown youngster, just the one, close to our apartment.  Given the size of the bird, it must have fledged at least a week ago and would certainly appear to have hatched in early February. 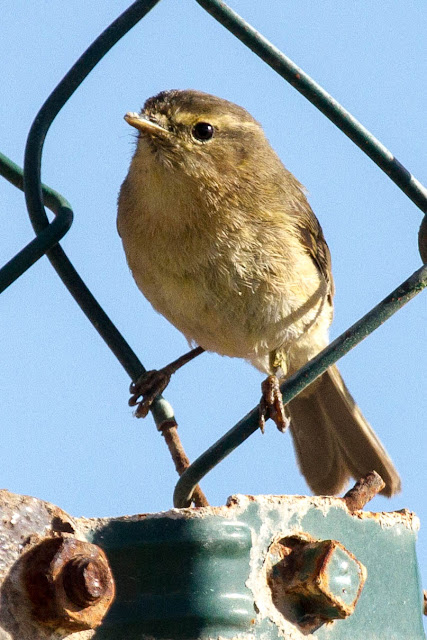 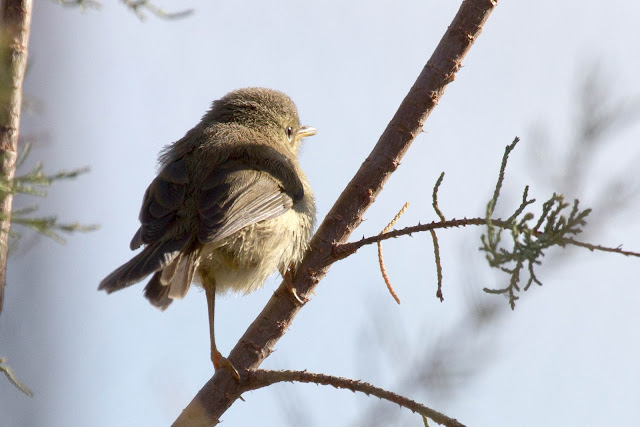 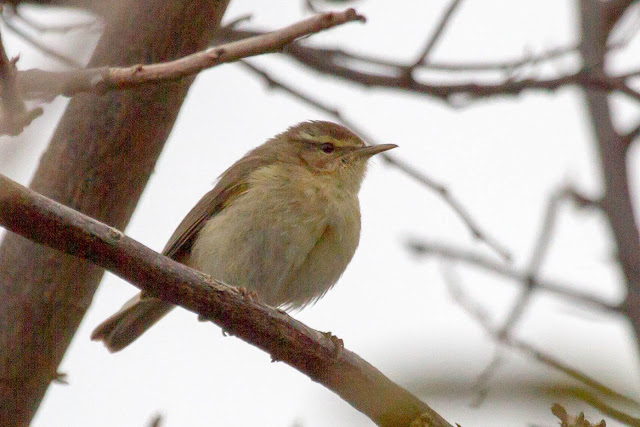 Very brief glimpses until we got our first decent view and the chance to try and get a photograph.  Seen on both sides of the northern part of the island and, again, in the Mount Teide area.  What struck us most was the darkness of the cap which made the white look so bright. 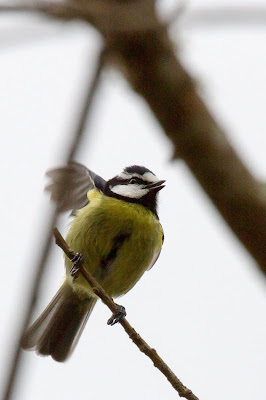 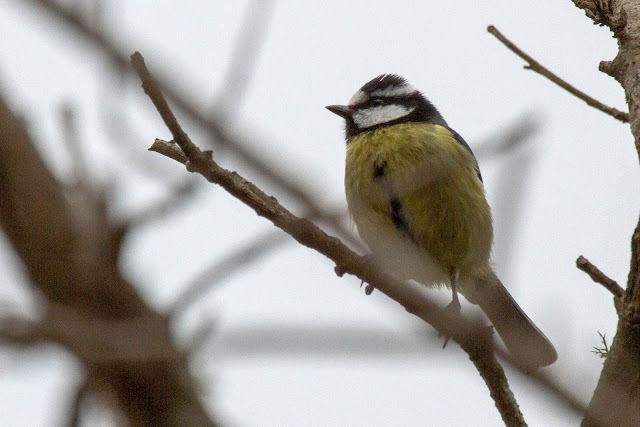 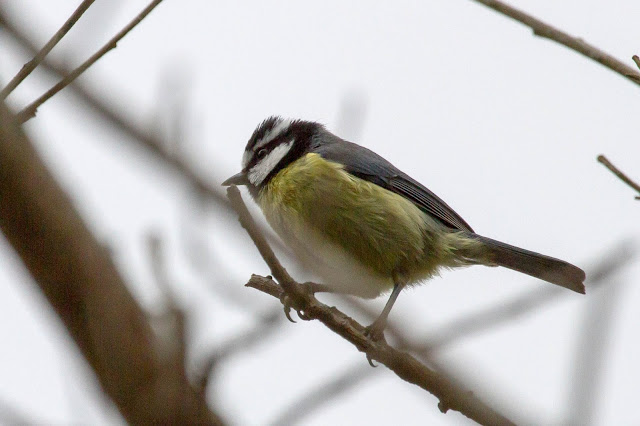 This is one of the many sub-species of the nominate Great Grey Shrike and peculiar to the canary islands and unlike our local Iberian Grey Shrike is not, as yet, regarded as a separate species.  We had a very clear and close view of this bird at Las Galletas but, sadly, no camera to hand.  A second individual was seen on the wires adjacent to the motorway a couple of days later as we neared the southern airport turn.

The mysterious "Black magpie" seen near the pond on our local golf course in the Golf del Sur area of Tenerife along with a number of Little and Cattle Egrets, Spoonbills and Barbary Partridges tuned out to be a Long-tailed Glossy Starling and the following comments were received:

From Bereharo Rodriguez:  One escaped bird has been present in the proximity's of Igueste de San Andrés (a little town at the end of the road of Anaga south coast) since several years.

From Steve Kitchen:  Having been a Golf del Sur "regular" for a good few years I was wondering whether your "Magpie-like bird" was in fact a Long-tailed Glossy Starling.  I suggest this because one of the species has been resident around the golf course since around 2009 (at least).  I attach the only (poor) photo I have managed; I caught a glimpse of it last year disappearing in to a tree/shrub adjacent to the small pool at the north end of the golf course. (Exactly where we saw the bird) This is where I photographed it back in 2009.  I remember it being a very vocal bird.  (For us there was no vocal accompaniment.)

What is it about these foreign starlings that live such long lives and seem to prefer to locate to the better golf courses and then remain loyal to a specific area?  Just like "Pepe" the Superb Starling that survived so many years near the practise tee at Malaga's Parador until it flew off to the "Starling heaven in the sky" early last year.

Our first bird was seen on the first day; just a fleeting glance south of Vilaflor when the road to Teide was closed.  A very vivid blue as it caught the sunlight.  Then visiting both the Agana and Mount Teide areas we were to see many, both males and females. 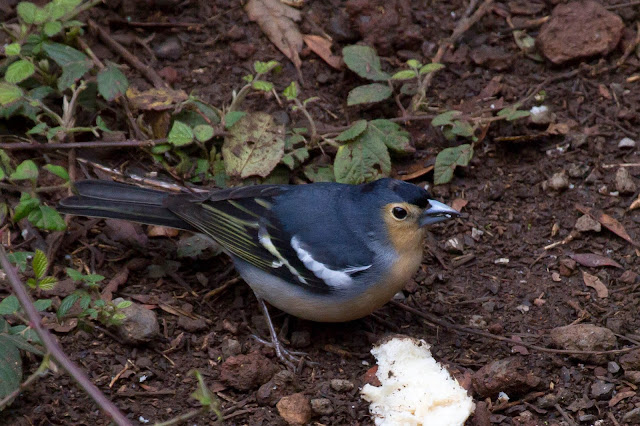 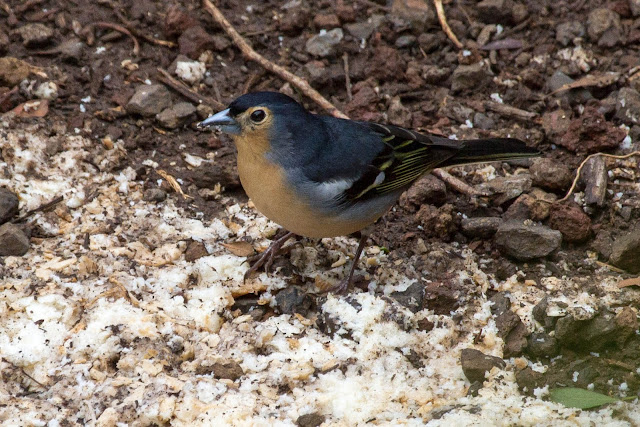 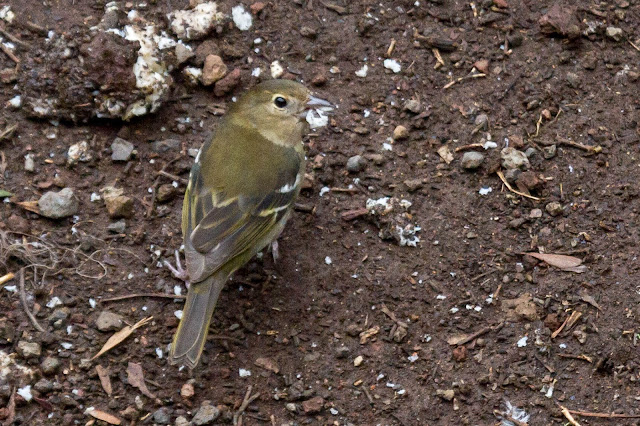 The bird of the canaries and originator of all those birds now bred in captivity for both showing and song - and in very many recognised "muted" forms resulting in different colouring and sizes.  The native bird looks larger than a Serin and can appear very similar in colouring and certainly needs the sun on its back to bring out the yellows, just like our native Serin.  usually on the wires when first seen but when you search the local area they are to be found both in the shrubs and on the ground. 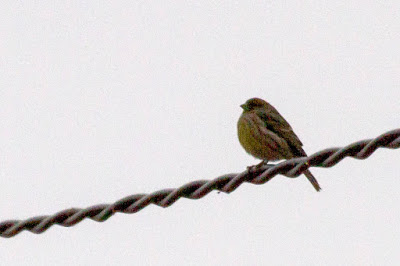 In addition to the above birds, we also found the local Great Spotted Woodpeckers and a pair of Trumpeter Finches.  Sadly, however, we not successful in finding a Bolle's Pigeon and we would certainly have like to get a photograph of the Barbary Falcon.


Check out the accompanying website at http://www.birdingaxarquia.weebly.com for the latest sightings, photographs and additional information.
Posted by Bob Wright - The Axarquia Birder at 04:06