Like many of our friends, jenny and I were away from the house a few minutes after 9am to drive up to that most beautiful coast of Almeria Province, Cabo de Gata for the week-end.  As we took the motorway past Motril we caught up Steve and Elena Powell and then continued on to our first stop at Las Norias, amidst the smell and plastic followed by the pools at Roquetas de Mar where, to our surprise, we also came across a further eight members of the group who were making their first stop on the journey.  A beautiful sunny start but a little colder and cloudy at the latter site but them with an hour, back to glorious clear, sunny skies before making our final stop at the Dotterel wintering site about 8kms short of Cabo de Gata itself.

Arriving at the first causeway at Las Norias a Wood Pigeon flew over the road in front of the car and, as so often happens, the first bird seen was a Collared Dove.  A Grey Heron overhead along with Red-rumped and Barn Swallows mixed in with both Crag and House Martins.  And just for good measure the odd Sand Martin put in an appearance.  Most of the Cormorants were resting near the water rather than in the air but we did pick up Mediterranean, Black-headed, Lesser Back-backed and Yellow-legged Gulls.  On the water both Common and Red-crested Pochards along with Mallards and Shoveler.  No shortage of Great Crested Grebes along with a few Little and Black-necked Grebes.  Moorhens and Coots were also present. and Common Sandpiper, Black-winged Stilt and Ringed Plover were working the edges.

Moving on to the top end near the plastic re-cycling factory we also added both Teal and Gadwall.  Lots of Avocet to be seen and the occasional Little Egret.  In the bushes and on the ground we found numerous Chiffchaff along with a good number of both White and Blue-headed Wagtails and a pair of Hoopoe.  A very pleasant surprise at the former site was both a Reed and a Great Reed Warbler along with a Sardinian Warbler but just the one Serin along with House Sparrows and Crested Lark at the latter.  Naturally, there were Spotless Starlings and Blackbirds to be seen but the addition of a Zitting Cisticola and a Meadow Pipit was pleasing. 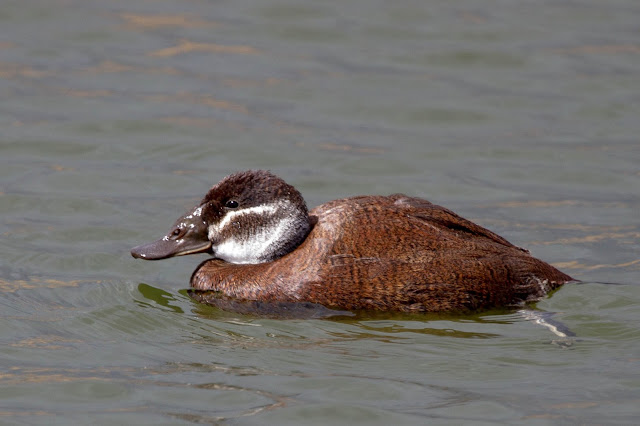 Moving over to Roquetas de Mar our first stop was at the pools below the lighthouse where we picked up numerous Flamingos, plenty of Little Egrets and a good number of Black-winged Stilts along with more Red-crested Pochards.  A most handsome male Marsh Harrier drifted over on the other side of the water and then we made our way round to the far side of these pools, a Common Kestrel seen on the way, first calling into the small pool so well-frequented in the day by families to feed the ducks and, mostly at night, by those with other ideas in the heads.  Here we found mainly Mallards and Common Coots (no sign of the Red-knobbed Coots on this occasion) along with two pairs of White-headed Ducks and a couple of Common Pochard.  House Sparrows and a single Robin fed on the crumbs that we scattered at the water's edge.

Another Marsh Harrier overhead as we carried on along the track passing numerous Flamingos and Little Egrets along with Redshank until we met up with Derek and Barbara Etherton and others.  We missed the Spotted Redshank that they had seen but were able to record a Golden Plover and a couple of Slender-billed Gulls along with Kentish and Ringed Plovers, Sanderling and Black-tailed Godwits.  A few Shelduck and Teal were also on the nearby waters plus very many Flamingo and Avocet.

Our final stop was on the track leading into the sandy scrub land from KM4 on the road to Caba de Gata.  Here we had both Stonechat and Linnet and just as we were about to set off for our hotel there came the telephone call from Derek to say that he and Barbara had found a flock of about 25 Dotterel about a further kilometre along the very bad track.  Most kindly, they returned to collect the five of us present and with Terry and Lin Osborn arriving at the same time, we all managed to squeeze into the two 4 x 4's and set off for the Dotterel site passing an Iberian Grey Shrike and small flock of Short-toed Larks on the way.  We were not to be disappointed with very good, distant, views of at least a dozen birds, the main flock having moved slightly on whilst Derek was returning to collect us.  Then, with a very happy smile on all our faces, it was on the Cabo de Gata, book into the hotel and great week-end's birding to look forward to in the company of dear friends.

Meanwhile, whilst we were all working our way up to Cabo de Gata, John and Jenny Wright, having arrived the previous day, were making the most of a day on their own with some very good sightings which promises well for the main meet on Saturday.  John's report follows:


Windy at first but settled down and very warm later.

We decided to go to the Lighthouse before breakfast, but the wind was there again - albeit not so strong - but most things kept their heads down, although we did see eight Black Wheatears, a pair of Bonelli´s Eagle, Crag Martins, Barn Swallows, Stonechats, House Sparrows, Spotless Starlings, Black Redstarts, Linnets and two Rock Buntings. Yellow-legged Gulls were seen above us, as were two Ravens which were attacked by a Peregrine Falcon.  As we drove out of the valley a Robin was seen briefly.

So back to the Rambla Morales where we picked up White Wagtails, Greater Flamingos, Shovelers, Avocets, Shelduck, Common Coots, Moorhen and Mallards.  A nice addition was the seventeen Razorbills spotted as we parked up at the beach, and moving back along the Morales track we noted a Blackbird.

At Hide 1 we managed to locate a large number of Slender-billed Gulls, a Great White Egret and Cormorants.  A Sparrowhawk came across the front of the hide chasing a Crested Lark, our second Blue-headed Wagtail, more Avocets, Black-tailed Godwits and Shelducks.  Black-winged Stilts, a family of Greenfinches, Chiffchaffs and White Wagtails were also recorded.  (And presumably Meadow Pipit?)
Also, at least four Common Kestrels were successfully hunting the road along by Hides 2,3, & 4.

Check out the accompanying website at http://www.birdingaxarquia.weebly.com for the latest sightings, photographs and additional information.
Posted by Bob Wright - The Axarquia Birder at 13:45