The morning drizzle had cleared and now all bright and beautiful with warm sunshine but a good breeze.  Time to test if my left foot was sufficiently rested/mended to see if it would cope with the 6km figure of eight walk through Hook with Warsash Nature Reserve.  It was, albeit feeling tired by the time I got back to the car.  Starting a the top of Workmans Lane I took the direct route down to the shore of Southampton Water. A Blackbird on the road and a number of Carrion Crows at the northern end of the horse fields behind the hedge to my left.  A couple of Magpies and then, spending a few minutes at the entrance to the horse fields, saw more Carrion Crows plus a couple of Rooks flying towards me.  No sooner on the final narrow path than greeted by a solitary Goldfinch on the wire above.

Once on the shore I was surprised to see how close the water was given that there was still three hours before high tide.  Just two birds to be seen, fairly close, at the water's edge, a Little Egret just into the water and a resting Common Gull.  After  200 metres rather than take my intended route back up to Workmans Lane I decided to carry on as far as the Meandering Pool then through the burnt gorse patch to the Scrape.  Good job I did as approaching the start f the pool I stopped to photograph a small group of Starling including fledged youngsters when three Glossy Ibis rose from in front of me and headed to the far end of the meandering Pool.  Reaching the other end of this water I discovered there there were four individuals along with two Little Egret, a few Mallard and even two of both Gadwall and Teal, plus handful of birder who were looking for the reported Glossy Ibis.  (As a result of my direction of walking they now had four rather than one individual to study!).

Walking alongside the gorse patch no Dartford Warblers on this occasion but a good-sized charm of Goldfinch included a couple of Linnet. At the back of the area a constant movement of Wood Pigeon and  more Magpies. Then, as I left the gorse area to take the grassy stretch towards the Scrape a resting Northern Wheatear on the grass in front of me which conveniently moved slightly inland to perch on the adjacent fence posts.  And there the Wheatear remained to allow even closer contact and continued use of the camera.

Arriving at the Scrape it was sad to note that the Spoonbill had moved on but still three Little Egret, five Heron and about 60 Black-tailed Godwits present.  A trio of Black-headed Gulls on a small sandy island to me right and a Common Sandpiper foraging along the shore.  Searching the water I found a few more Mallard and a trio of Little Grebe. A Rock Dove was also recorded on the far bank.

Making my way back along the shore to take my original path back up to Workmans Lane I watched a lone Sandwich Tern make its way slowly up Southampton Water close to the shore on its fishing expedition.  Half-way up the path a single Herring Gull passed overhead and then I was at the entrance to the horse fields. No sooner ate nearest hedge and a local Dunnock was disturbed and having checked the large number of feeding Carrion Crows present I also found a handful of Jackdaws.  Only the occasional Barn Swallow feeding over the fields but a Robin did put in an appearance before I took a left and headed up to the top lane where I found a trio of Stonechat.  And so back, via the small spinney, to the car and home. 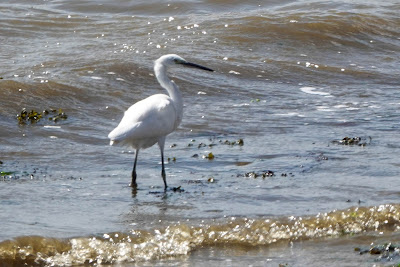 For the latest news follow the Axarquia Birds and Wildlife Facebook page for more photos and comments and the opportunity to share with the wider birding world.
Posted by Bob Wright - The Axarquia Birder at 02:58