Up very yearly and at the Normandy lagoon on Lymington Marsh by 8 o'clock.  Apart from the occasional Wood Pigeon and a passing Blackbird nothing to see until on the western embankment with a few Black-headed Gulls to my right and many more on the lagoon itself.  Lots of Redshank but the Lesser Yellowlegs seems to have finally moved on to pastures (or mudflats!) new.  A few Turnstone were also working the edges and resting on the banks of the lagoon at least five Great Black-backed Gulls.  Also seen a number of Oystercatchers and the first of many Little Egrets.

Moving to the southern (sea) embankment I soon found a couple of both Dunlin and Ringed Plover closely followed by a quintet of Greenshank. Just the one Mallard in the canal below me and as I returned to the car I recorded a half-dozen Barn Swallows and a single Rock Dove.  Meanwhile, way out on the Solent itself, I was able, using the scope, to pick up a flock of almost a score of Common Tern busy fishing in one small area.

So on to the short journey round to Pennington Marshes with Dunnock and Magpie as I approached and checking first the large (fresh water?) pool between the inland footpath and the camping park no shortage here of Black-headed Gulls and maybe an hundred Canada Geese.  Also plenty of Coot, a few Herring Gulls and a lone Carrion Crow.  Working my way back to the path to the shore I had a dozen House Sparrows and then major flocks of Starlings.  However, best sighting as I made my way towards the shore was the trio of Lesser Whitethroat which paused long enough in a distant bush to chance a few quick photographs. 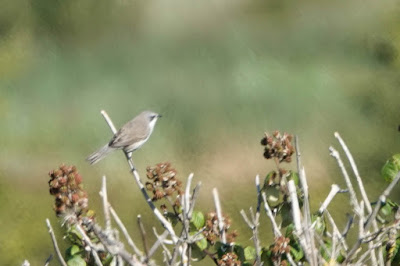 Onwards to the lagoons on my right which were now almost completely dry through lack of rain for over a month.  However, still a good number of both Shelduck and Avocets present.  A few Barn Swallows were seeking food above the remaining pools and a single Lapwing was huddled up close to the bank.  Perhaps most noticeable was the number of feeding Pied Wagtails with a good mix of both adult and juveniles.

Once up on the southern embankment I could also pick out a number of Oystercatchers, especially those resting off shore on a grassy spit, and on the main water a number of both juvenile Shelduck and Mallards.  Below me, on the opposite side of a wet ditch a pair of Grey Wagtail.

A walk westwards revealed a small flock of Linnet and a the first of the local Redshanks.  Resting off shore on another grassy "island" seven Herons before time to turn round and make my way back eastwards to check out the distant lagoons, having taking an anti-clockwise walk on this occasion.

The first, completely dry, lagoon had a reed bed immediately below me and a small stream between same and the embankment.  It was here that I saw the adult Water Rail but not the chick that had preceded it into the reeds at the far end.  Over the reeds the sighting of a Sedge Warbler was most pleasing.  Just in time to see the only Moorhen of the morning before setting off for the final lagoon complete with a herd of "wallowing" cattle in the remaining deeper pool.

Not so much the eighteen Little Egrets that I counted here but the two Cattle Egrets, one far away foraging between the beasts and the other sitting all forlorn on its own on the bank to the right.  In the water near the cattle a quartet of Black-tailed Godwit.  However, on the Solent side, the old ruined posts close to the shore held no less than 4o resting Turnstone and a single Common Tern at both ends of the ruined structure. 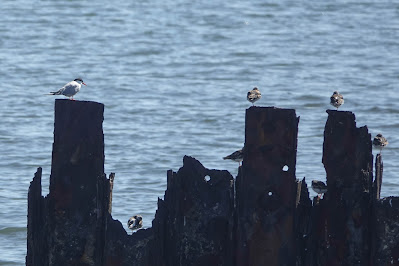 On the main path and, indeed, back into the inland path that led back to the car park, a number of Stonechat including both moulting adults and well-grown youngsters.  Behind the pool as I made my way back I picked out the two resting Numenius waders which certainly appeared to be Whimbrels but on enlarging the distant shots I now suspect they might be Curlew so await some positive responses  The bill in the enlarged photos seems more curved that when seen using bins but there is a well-defines eye stripe.  I await any suggestions!  Time to set off home with a Robin flying to the next bust to bid me farewell until next time. 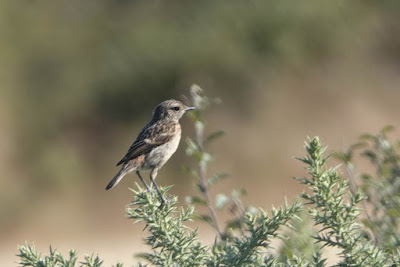 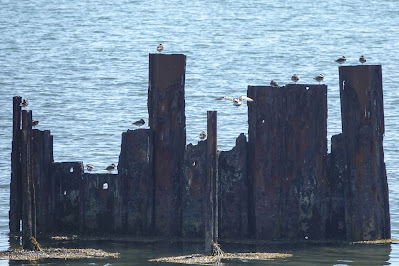 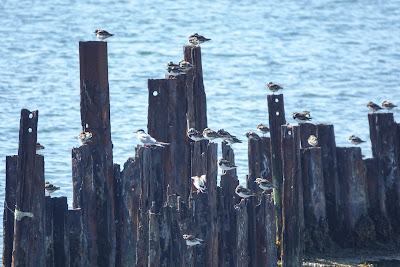 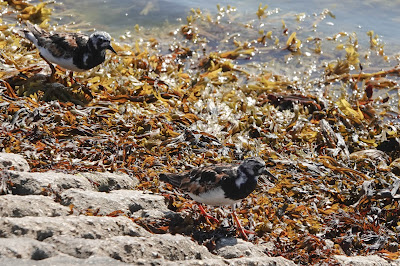 Posted by Bob Wright - The Axarquia Birder at 11:45