Storms and rain forecast from this evening so a last chance to take a short birding walk up the lower Hamble River to the conservation area and back before the possibility of no birding in the coming three days plus.  Warm and cloudy  with a gentle breeze on the return walk as I set off in the late morning.  As soon as I reached the shore with the tide about half-way in no shortage of Black-headed and a few Herring Gulls.  Also working the first expose area a total of fifty Black-tailed Godwits and seven Turnstone.

Moving on past the ferry landing more gulls and the first Curlew.  The mud gullies on the inland side of the path held a single Little Egret and yet more of the resident Black-headed Gulls.  Ere long the first of three Carrion Crow before a flock of thirty Starling took off from my right and headed for the trees at the back of Bunny Meadow.

Continuing on a pair of Pied Wagtail were foraging in front of me and looking towards the river one of the grassy islands held a good-sized flock of Black-headed plus more Herring Gulls along with two sleeping Great Black-backed Gulls.  Another two Curlew and then a lone Grey Plover in its most handsome plumage.

Once at the conservation area I found more Black-headed Gulls and a further fifty Black-tailed Godwits.  Also present five Heron along with three more Little Egrets.  Also in attendance about thirty Redshank.

Making my way back I recorded a single Lapwing plus four Wood Pigeon in a neighbouring garden area.  Finally, right at the end of the walk, a single Magpie.  However, for I believe the first time, since walking this site I did not see a single Oystercatcher, whereas in the past there had always been at least two and often as many as a dozen. 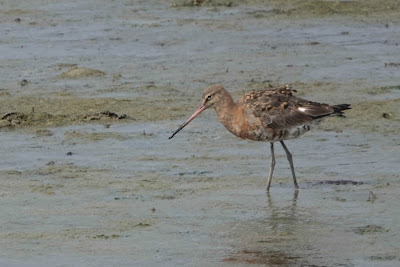 For the latest news follow the Axarquia Birds and Wildlife Facebook page for more photos and comments and the opportunity to share with the wider birding world.
Posted by Bob Wright - The Axarquia Birder at 08:58