Given that today, Thursday, is likely to be my last opportunity to visit the new Forest before returning to Spain next week for about six weeks, I was away early and at the view point from the main road overlooking the large lake at Fishlake Meadows, Romsey.  The main attraction was the recent sighting of an Osprey and I was nor to be disappointed almost as soon as I arrived.  A couple of Magpies on a dead tree in the water followed by the first of two Great White Egrets then a check of the smaller water birds including Mallard, Gadwall and Teal.  A reasonable number of both Great Crested Grebes and Coot towards the back and as I scanned the bare trees at the back I stopped at the large brown "lump" atop an isolated dead tree and there was the resting Osprey.  Lovely - but very distant in terms of a photograph.  Also present a small number of Black-headed and a single Great Black-backed Gull. 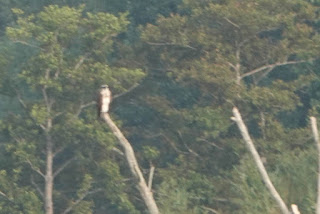 Continuing my check of the site I then noted the dozen Cormorant followed by the arrival of flocks of both Canada and Greylag Geese.  A Blackbird entertained myself and a fellow birder who had joined me before I was taken about thirty metres to our right where another access in the hedgerow gave a better sight of the left-hand edge of the water.  And there, resting at the top of another dead tree, was a Peregrine Falcon.  My companion then mentioned that a second had been resting at the other end of the water and this is a raptor which is know to breed at this lovely site.  Just to think that until this morning I had not seen a single raptor all month - and then two with the Osprey and Peregrine sightings; can't be bad. To complete the 20 sightings in the fifty minutes present at the site, I also recorded a Mute Swan, Carrion Crow, Little Egret and Moorhen.

Thirty minutes later I was in the New Forest proper at Eyeworth Pond near Fritham but, on this occasion, no sight of the resident Mandarin Ducks.  More than a score of Mallard and a couple of Moorhen with an overflying Heron to add the local Carrion Crows and Wood Pigeon.  Near to the car a regular supply of Chaffinch and House Sparrow along with visiting Robin and Blackbird.  Lots of Blue and Great Tits but it was the single Coal and the pair of Marsh Tits that lit up the visit for me. 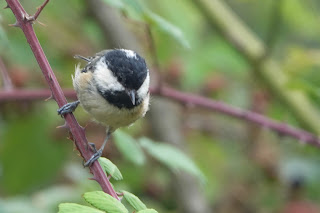 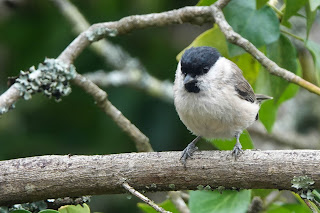 And so on to my final destination at Blashford Lakes near Ringwood noting the feeding group of Jackdaws as I approached Fording bridge on the scenic New Forest road.  Straight to the main hide overlooking Ibsley Water from the south-east where, yet again, there were scores of Great Crested Grebes and probably approaching three score Egyptian Geese.  At the back of the water a number of Mute Swans, a Little Egret, Great White Egret and, on this occasion, two Black Swans.

Nearer to me a single Grey and a couple of Pied Wagtails.  One relatively close Lapwing but far more at the other end of the water.  Certainly no shortage of Coot or Tufted Duck but just a couple of Mallard. On the bank to my left both Robin and Dunnock until a trio of Blackbirds put in an appearance.  Just the one Carrion Crow noted but very many Heron.  To my right. first a male, then female followed by juvenile Stonechats.  Gulls present were mainly Black-headed along with a couple of Great Black-backed.  And all the while a good number of Barn Swallows feeding over the water along with at least one Sand Martin.

Over the road to the main centre of the reserve where most of the birding was seen from the Woodland Hide adjacent to Ivy Lake.  However, on my walk through the wood I did manage to record a Jay. And strange to relate for the first time at the site I recorded neither Carrion Crow nor Magpie.  Once inside the hide I was able to enjoy the comings and goings of very many Blue and Great Tits along with Chaffinch, Greenfinch and Goldfinch.  Dunnocks and Robins were foraging around the ground below and the arrival of a local Nuthatch.  The final walk took me down to n almost empty Ivy Lake itself where all that was to be seen were three juvenile Black-headed Gulls and a pair of Gadwall, albeit I did find a couple of Mallard and a Moorhen on the now very weedy small water alongside the path.  No doubt by the time I return next this water will be chock-a-block with Wigeon, Teal, Tufted Duck and Shoveler. 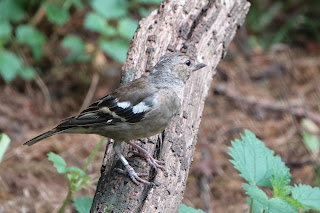 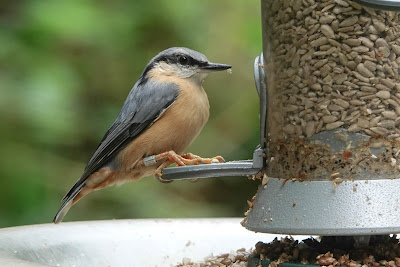 For the latest news follow the Axarquia Birds and Wildlife Facebook page for more photos and comments and the opportunity to share with the wider birding world.
Posted by Bob Wright - The Axarquia Birder at 05:50