A much calmer day and the first rain for over a month with a little, occasional light drizzle up until mid-morning. Away from home by 8 so that I could pay a quick visit to Fishlake Meadows in Romsey to find the visiting Whiskered Tern which did, eventually, decide to settle down albeit on a distant bare tree.  Beneath it  both a Great White Egret and a range of gulls including Herring and Great black-backed but, even better, a Yellow-legged Gull.  Also present were Cormorants, many Coot, Tufted Duck and a couple of Pochard.  At the back of the water a few Greylag Geese and a Mute Swan plus a passing Heron before a hunting Peregrine Falcon finally came to rest to allow a very distant record shot. A handful of Great Crested Grebe were also recorded before a quintet of Black-tailed Godwits flew over the water and into the reserve proper. 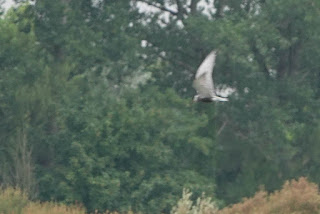 Onwards into the New Forest proper to pay a short visit to Eyeworth Pond near Fritham.  Amongst the Mallards expecting to be fed a single Mandarin Duck in eclipse plumage - and looking much smaller than this year's young Mallards.  Around the bushes at the edge many Blue and Great Tits along with a single Marsh Tit.  Also present both Chaffinches and House Sparrows and even a Moorhen with her well-grown youngster came to investigate, as did a rather handsome Pied Wagtail. 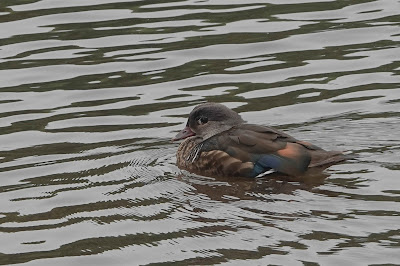 The final stop near Ringwood was Blashford Lakes where the main Ibsley Water was full of bird life, although most at the very back and furthest away from the hide.  Scores of both Coot and Great Crested Grebes along with dozens of Mute Swans.  In addition, there seemed to be Egyptian Geese on just about every island and protrusion; surely at least 50 individual of varying ages. At the far end of the water a number of Greylag Geese, Cormorants and a mixture of Herring, Lesser Back-backed and even a couple of Greater Blacked-backed Gulls.  The long-staying Black Swan was still to be seen (with the use of a telescope) and on the water both Mallard and Tufted Ducks.  In addition to the many Barn Swallows feeding over the water a couple of Sand Martins were also recorded.  On the left hand bank both Carrion Crow and Magpies were noted with a lone Blackbird close to the hide.

Time to cross the road and explore the main reserve where all appeared relatively quiet. Most of the action was centred on the Woodland Hide where the feeders were being actively attended by mainly Blue and Great Tits but also a lone Coal Tit, Chaffinch, House Sparrow and Robin.  A Nuthatch made a brief sortie to extract food and a couple of Dunnocks seemed happy to forage for dropped scraps.  It was as I set off for the return journey to Warsash that I found both the local Jackdaws and a pair of Collared Doves. 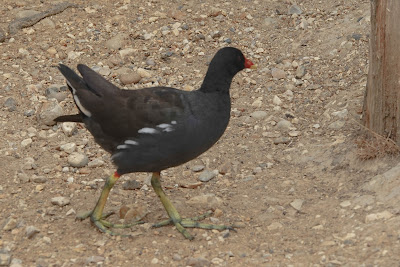 For the latest news follow the Axarquia Birds and Wildlife Facebook page for more photos and comments and the opportunity to share with the wider birding world.
Posted by Bob Wright - The Axarquia Birder at 11:43